The most expensive Rolls Royce: The bespoke Sweptail

You’ve probably heard of many expensive cars, and you’ve also more than likely heard of the ultra-luxurious Rolls Royce cars; combine the two and you get the Sweptail which is the one most expensive Rolls Royce ever!

The most expensive Rolls Royce

Rolls Royce is well known for their ultra luxurious and fancy vehicles. Their seamlessly handcrafted cars are one of the world’s most desired and most expensive vehicles; so expensive that for their bespoke (customized and specialized) cars, the company doesn’t even talk about the base prices. The effort that goes in to producing a Rolls Royce is not just the production of a car but is an art in itself. Bespoke cars start from scratch, as a single line on paper and end up as beautiful cars, which were once just a figment of an individual’s imagination, running on roads.

The effort is immense and the process covers quite a long period of time. As David Dean, Tour Guide at Rolls Royce, says “When we go to the paint shop, you’ll see it’s called the Surface Finish Centre, because it’s a bit of an insult to say, “We’re painting the car.” It’s more than that. You’re going to have at least seven layers of coat. There’s primers, there’s base coats, there’s color, and, unusually, we put on two clear coats of lacquer. But you could have up to 23 layers of coating, which we’ve done before, equating to about 45 kilograms in weight just of coat.”

If this sounds shocking to you, among cases like cars painted with gold and cars whose trunk doors open up and ramps shoot out automatically when a specific dog collar is nearby, there has even been a case where a customer, for the sake of shine on his car surface, had his car’s paint be mixed with crushed diamonds before application.

The Sweptail, and what makes it so special 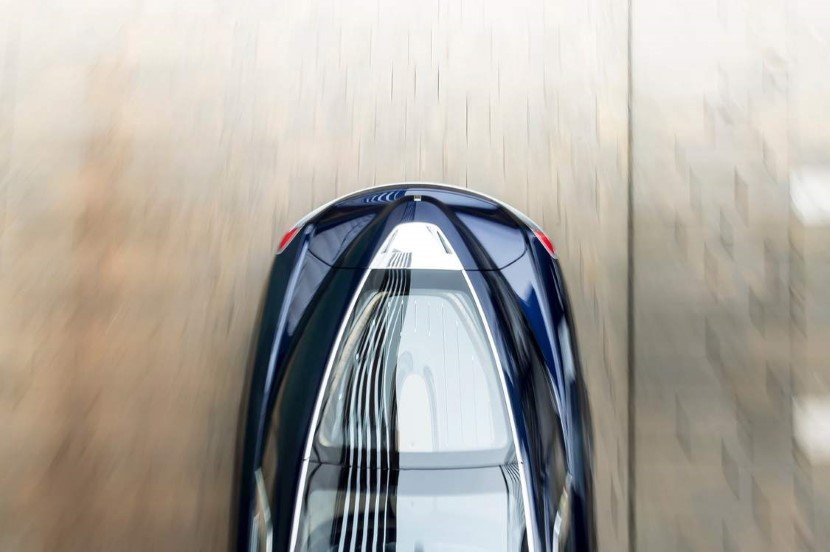 This old-fashioned and gorgeous vehicle has been designed from the ideas of one individual customer whose identity has been kept hidden. The design is elegant and is based off certain old Rolls Royce models. The major body design is based off the design of the Rolls Royce Phantom Drophead Coupe, the chassis is based on the Rolls Royce Phantom VII Coupe’s chassis and the silhouette comes from the 1934 Phantom II Streamline Saloon as well as the Park Ward 20/25 Limousine Coupe.

The engine which is a 6.75 litre V12 Rolls Royce engine and produces 453 horsepower and 541 pound-feet torque is a commonly used engine with Rolls Royce vehicles. The mechanics of the vehicle are essentially ones that already are in common use and are signature to Rolls Royce as a brand. The externals, however, have been customized of course.

Looking more at the externals of the Sweptail and starting from the front, we see that the front grille is a common modern Rolls-Royce grille, it is made up of aluminum with a fine silver hand polishing on it that gives off a mirror finish. The front and rear fascia, as well as the rooftop, are all aluminum framed for a shinier finish. The rooftop is made of glass and lets the bright natural light from the sun into the interior during a day-time drive.

How to Fix the Error “This Page can’t Load… 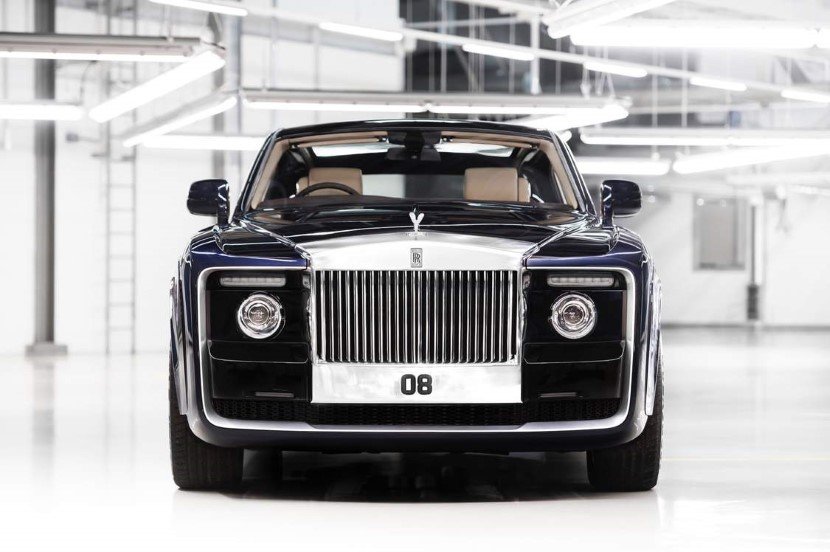 The paint is a deep royal blue shade with a thin pinstripe on the side which is painted by one man, in one go and with one single long stroke of instantly affixing car paint. 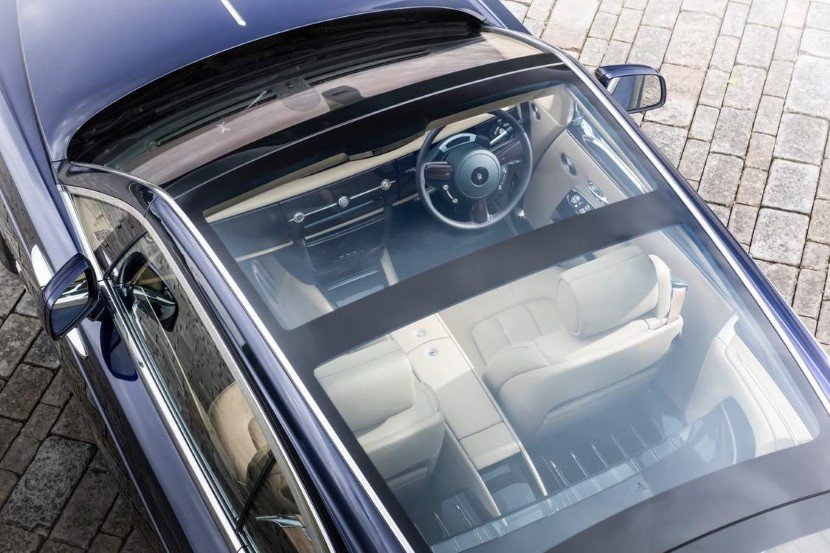 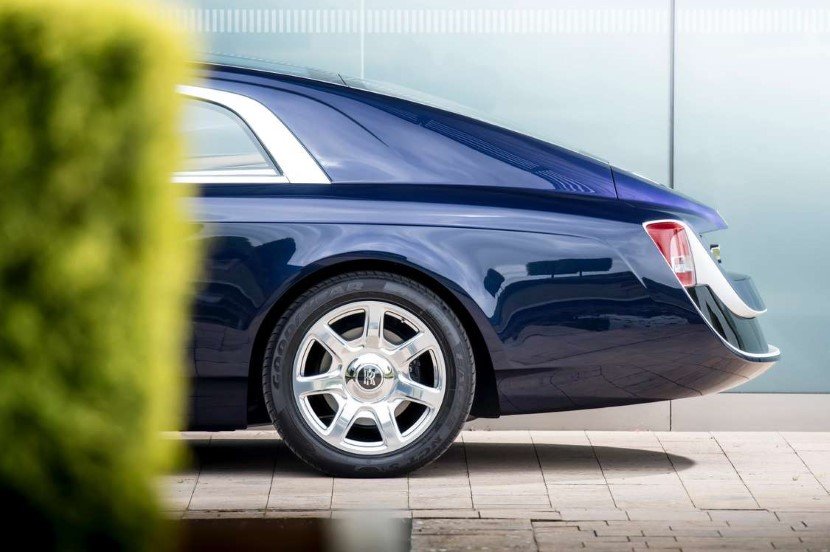 … and the fancy interior!

The interior of the vehicle is minimal and elegant. Designed with the richest and most premium of materials, it binds simplicity with royalty. The front seats are wide and spacious and the back seats are given a bench style. The materials used are Polished Macassar Ebony and open-pore Paldao which offer a beautiful contrast with the materials and colors of the seats, armrests and the surrounds of the fascia which are designed using Light Moccasin and Dark Spice Leather.

As the seats end, the cabin for storage of luggage starts. This cabin is made up of wood – finely crafted and bordered with glass. There are also luggage rails installed in the cabin for more a secure carriage for the luggage. Following the cabin is a Passarelle which looks like a small shelf area and constitutes the end of the interior of the Sweptail as the glass rooftop ends into a teardrop. It has the Sweptail’s name etched on it. 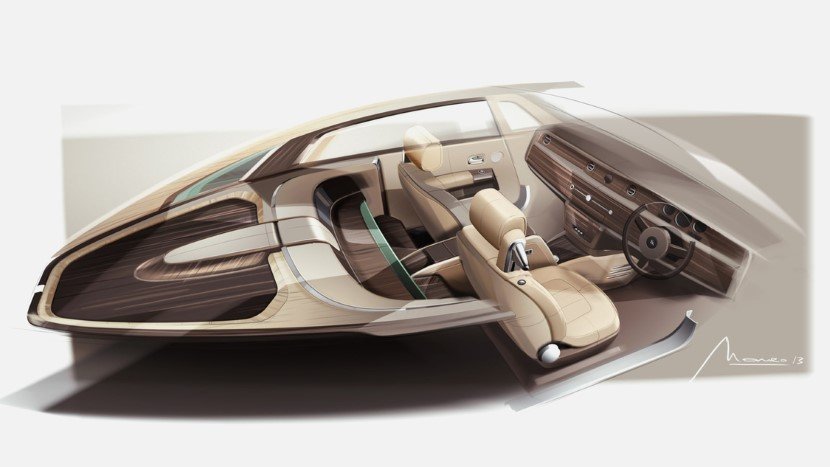 In the center of the car, extending from the front to the end cabin is the vehicle’s “coup de gras” which is a French phrase meaning ‘the final blow’. The central console is a nude stretch that contains a hand built system which will bring out, for the passengers, a champagne bottle and two crystal champagne flutes on the command of a button.

While the designing was started sometime in or around 2013 according to estimations, it was in 2017 that the Sweptail was presented to the public at the Concorso d’Eleganza Villa d’Este on Lake Como in Italy.

While other details have been kept hidden from the general public, the price of the most expensive Rolls Royce has been made public and the car costs a whooping $12.8 Million.

Rolls Royce was first produced out of a need for better cars for England. Henry Royce, who was a successful electrical and mechanical engineer already, felt the need for better cars as he noticed the lack of reliability of his own vehicle. This lead to him creating a car for his personal use, from total scratch, in Manchester City in 1904. The same year, in May, Royce met his future business partner. Charles Rolls, aka “Dirty Rolls” or “Petrolls” thanks to his extensive repair work on engines, brings the “Rolls” in the company’s title. He was an entrepreneur and also, a mechanical engineer with a desire for more reliable vehicles.

The two engineers joined hands to create the world’s first Rolls Royce which was made available for sale, in the same year, in 1904. As time passed by, more and more Rolls Royce vehicles got produced. Initially these were all coach-built but, later more diverse cars started getting produced by the company.

Today, besides being in the vehicle production and assembly business, Rolls Royce also produces marine gas turbines and airplane engines!

These Microchips capable of Self-Cooling Could Minimize Overheating in devices