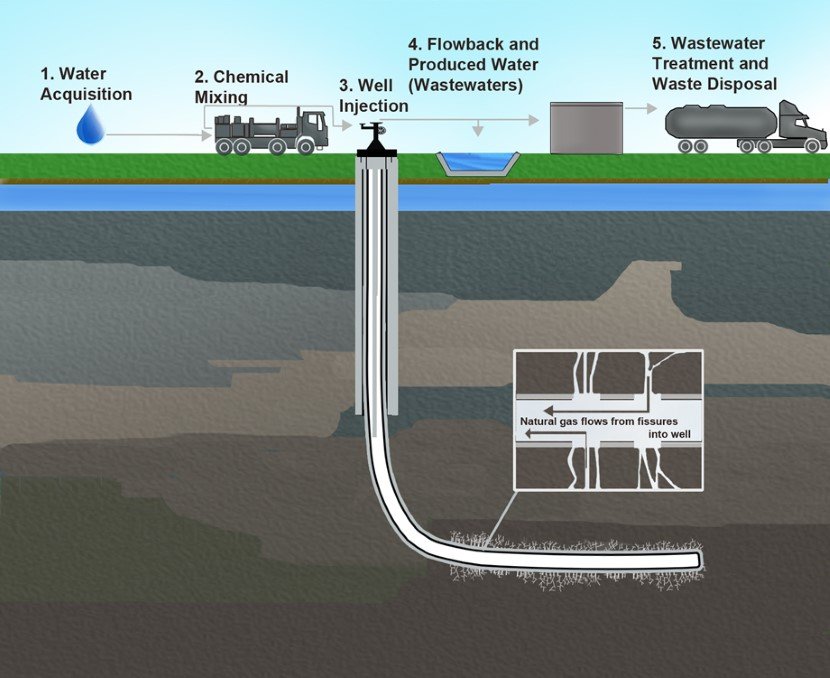 It is no mystery that everyone is out to get as much energy reserves as they can on their hands. New techniques are always underway in order to locate and dig up energy reserves. Saudia Arabia has always been known to be one of the richest countries of the world, the reason being their widespread oil reserves, so much so that they now sell oil at a cheaper rate than water. Currently, with a new technique known as Fracking, countries are able to dig out energy and gas reserves like never before. This technique has been in use since the 1940s but has now become more common. Fracking or in other words, hydraulic fracturing is the process of inducing cracks beneath the surface of the earth through high pressures, and injecting fluid and then collecting the gas released.

What was fracking back in the days?

In the mid-2000s, US oil companies figured out the ways of fracking and found it best to work with Shale rock. Plenty of this rock is available in states such as Texas, North Dakota, and Pennsylvania. By 2014-2016, only one company, Cuadrilla Resources, in the North-West of England did some serious drilling and tried the technique. By 2018, US became the highest producer of oil and natural gas, beating Russia as well as the great Saudia Arabia, all due to the revenues of fractured horizontal wells that contributed to about 69% of all the oil and gas industry of the US. The concept of Fracking is relatively not a new concept. Halliburton was the first company to use this technique tracing it back to 1949. The process was used to increase the flow of gas in the wells of Kansas city.

What is fracking today?

Due to the extensive production of natural gas through this procedure, the US is now being called as a shale gas revolution. The overall production of natural gas has risen to about 60% since 2008. The US is now producing 91 billion cubic feet per day (Bcf/d) contributing to 37% of the total energy revenues of the country. Moreover, the hydraulic fracture is now responsible for almost 80% of this energy from 10% in 2008.

The shale gas has revolutionized the country’s energy revenues to such an extent that it is now able to hold cross-border trade for exports. There is no doubt in concluding that fracking has led to a positive impact on the US economy in the following ways:

Despite the oil and gas industry contributing a short portion to the US economy, it has still caused a significant boost in the economy. According to JP Morgan, oil and gas industry added 0.3 percentage points to the economic growth of the country in 2013 and is likely to rise to 0.5 percent in the next 10 years.

The price for US natural gas has fallen drastically since the mid-2000s, despite the total revenue depending on global prices of oil and natural gas. With the help of fracking, it is now believed that power plants are more likely to use natural gas for energy production rather than electricity.

Use of coal power

With the rise in the availability of natural gas, most industries now choose natural gas over coal as a source of power. This has led to a potential decrease in massive air pollution caused by the burning of coal. This is also the reason many coal power plants have been shut down since 2011.

Boost for the US industries

After the US, most industries are now looking for ways to utilize this cheap natural gas to their benefit. Some of the factories in Texas and Pennsylvania have decided to convert natural gas into Ethylene which is a basic ingredient in the making of plastics and anti-freeze. According to Morgan Stanley’s note, since power costs consist of a very little percentage of the entire budget of companies, it is still a wonder how many industries the cheap energy revenue will effect?

The key factor in raising a country’s economy is to boost its exports and limit imports all the while maintaining a trade balance. The import of oil and other energy resources was a major contributor to lowering points in the economy of the US. With the help of fracking, the US is now importing very little oil and gas from other countries as a result of which, the trade deficit has significantly decreased. Many companies are now in an argument with the US government to start thinking big and sell the excess of oil and gas revenues to other countries with the aim of increasing their export numbers for the economic well-being.

There are a few steps in the procedure of Fracking:

It is a natural gas trapped in the shale rocks located deep underground. Shale rock is a type of compressed grainy sedimentary rock which is comprised of silt, clay and organic matter. It contains methane gas as well. The methane can be used as an energy source for heating homes or for cooking purposes.

Why is fracking not familiarized?

Considering how beneficial fracking has proven to be for the US, it’s a common question as to why are other countries not already heeding towards this methodology? The answer would be because the process is not entirely sustainable as it has numerous environmental impacts and most of the countries consider other techniques as more reliable than fracking. There have been several huge and aggressive protests against fracking in the UK, many local organizations have come together under the name of ‘Frack off’ in order to terminate any plans regulated to carry out the procedure anywhere in the country.

According to the Paris Climate Change Agreement, any use of fossil fuels is to be terminated and carrying out the process of fracking would be a breach of the agreement. There has also been a report published on how fracking completely goes against the climate target of the US. According to most experts, there are plenty of green and sustainable ways to obtain natural gas in comparison to fracking. Fracking is not only a danger to our environment but is also a threat to wildlife where unnecessary industrial work is carried out in order to obtain natural gas.

The amount of water required for the process of fracking is a multitude. Billions of gallons of water are being used solely for this purpose. When there is no nearby source of water for the procedure, it is drawn from lakes and rivers miles away. This disturbs the water level for marine life and the overall balance of the eco system. According to the EPA, Environmental Protection Agency, an estimate of 1.5 million tonnes of water is required per well.

The water mixture used for the process of fracking is believed to inhibit many carcinogens. There is also a high risk that this water might leak into local water supplies and cause a national health hazard. According to a 2015 report, the EPA documented 151 hydraulic fluid spills, thirteen of which ended up in the local water supply. The EPA has also reported that the by-product of this procedure results in billions of gallons of wastewater, a fraction of which is reusable. Most of this water is injected deep into the ground and the rest is transported to treatment facilities. However, there is a potential threat that this wastewater might leak into the water supply as well. The high salinity level is also a threat to plant life in the surrounding regions.

Fracking was again started in 2018 for the first time since 2011. There have been 47 reported earthquakes of 1.5 magnitudes in Caudrilla’s Preston Road since then. It is believed that the injection of fracking water underground is the main reason for these mini earthquakes.  After the injection of fracking water, the leftover chemical-induced water is also injected into the nearby wells that causes an overall pressure build-up inside them and causes rocks to shift around. In case the shifting of rocks takes place near a geological fault, a strong earthquake can be easily induced.  A report by the US Geologic Survey confirmed that there was a rise of tremors in areas where fracking fluids were being injected. Another study further set in stone the fact that the Earthquake in Oklahoma in 2011 was very likely to be triggered due to the wastewater that was injected in that area. It is important to mention that most of these earthquakes were minor but there are still no hard estimates on the fact that whether these earthquakes could lead to a stronger, more serious one in the future.

During this process, a large amount of shale gas rises upwards, most of which is captured and used yet some is still escaped into the atmosphere. Shale gas is known to comprise methane gas which is a major contributor to greenhouse gases, making it a big concern for increase in global warming. Apart from this, there were reports of ethane gas being spread in the surrounding areas as well, which does not only pose a threat to the nearby residents but the workers as well. The EPA is now conducting an extensive report on the companies to limit the use of Fracking.

The UK is still not ready to test the procedure of fracking and is headed more towards other efficient ways to generate power resources. The keynote idea presented by the UK is to build green gas mills. These gas mills will:

Despite all the adverse environmental impacts of hydraulic fracturing, the US plans to keep it going and has estimated a rise of 92.5 Bcd/f by the end of 2020. Countries such as China, also made big plans with the use of the procedure with the China National Petroleum Corporation investing $4 billion. However, work was halted after a series of mini tremors in the surrounding areas that led to the death of 2 workers and displaced another number of 1600.