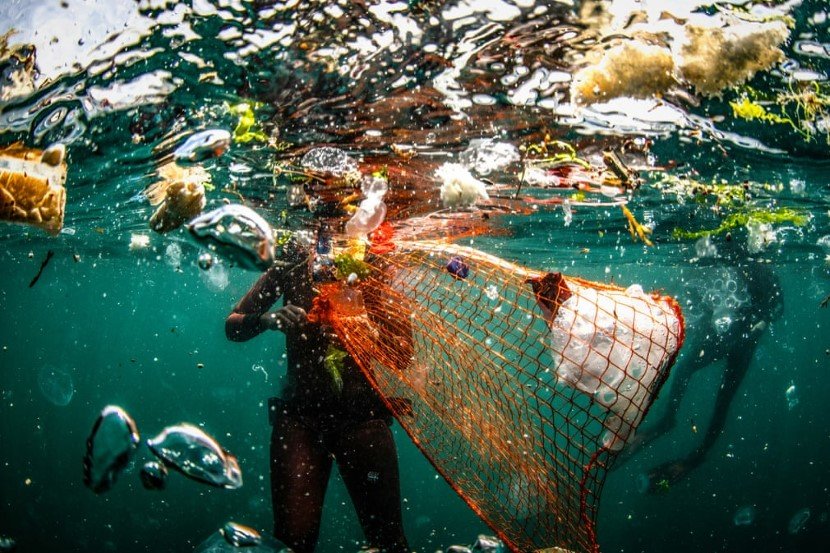 Climate change has become an evident problem in today’s world and can prove to be disastrous if we don’t act on it. Luckily, scientists have discovered plastic eating bacteria that can potentially reduce the chances of environmental disasters.

ElliQ Robotic System is designed to keep the elderly some…

Do you consider yourself responsible for all the damage that has been caused to our planet? Do you consider yourself environmentally aware enough when it comes to environmental damage and climate change? Think again. If any one of us has ever used even a single plastic bag or sprayed toxic chemicals into the air, we should consider ourselves responsible for the damage. We now live in a world which is destined to experience drastic climate changes, especially if we don’t protect it and change our lifestyles. From allowing the harmful industrial smoke to go out in the atmosphere to using other detrimental products containing chemicals like CFCs, we are responsible for letting them deplete the ozone layer and cause climate change.

The use of plastic in today’s world

Human beings have been exploiting natural resources alongside producing synthetic harmful materials for quite a while now. Plastic is one of such human-made pollutants and is one of the biggest contributors to climate change. From water bottles to furnishings, all are one or another form of plastic. The plastic that we use has its origins in natural gas, coal, salt etc. As its production depletes these non-renewable energy sources, it causes harm to human beings, animals and the environment. Scientists have now discovered plastic eating bacteria that can pose as a modern solution. This can help fight climate change and make the environment better and safer for all.

There are multiple types of plastic with varying characteristics, and it can take approximately more than 400 years for a single plastic bag to biodegrade. The current best known natural way for plastic to degrade is through photo degradation, which is a process that uses light photons in UV rays to break down the units of the polymer. Now, we know that the plastic waste from our homes ultimately gets thrown into the oceans or landfills. The plastic buried into the earth rarely sees light and so, it takes longer than ever for this waste to biodegrade. In fact, landfills are designed in a way that prevents bio-degradation.

The waste in the oceans, however, gets to see some light but since the monomers for plastic are compounds like BPA (Bisphenol A) and phthalate plasticizer which are very toxic, plastic, even after degradation, is bad for marine life. When humans eat fish or other seafood, these toxic compounds enter the human body and cause damage to it as well. For instance, BPA disrupts the endocrine system and PVC monomers can cause mutations and/or cancer in human beings.

“Plastic pollution is not just an oceans issue. It’s a climate issue and it’s a human health issue,” says Claire Arkin, communications coordinator for Global Alliance for Incinerator Alternatives, which is a global network working to reduce pollution and waste.

Pre-degradation harms of plastic on life are known by all. It is very common for animals to get entangled in fishing nets or for them to get plastic stuck in their throats. Further research shows that around 100,000 sea turtles and other marine animals die every year by being strangulated by plastic bags or for mistaking plastic bags for food. “Imagine you ate lunch and then just felt weak and lethargic and hungry all day. That would be very confusing”, said Matthew Savoca who is a marine biologist working with the National Oceanic and Atmospheric Administration.

Biodegradation of plastic has been a major problem for years and scientists have been working tirelessly to find a way for it to degrade without causing harm to the environment. Multiple researches have been conducted on plastic eating bacteria and recently, a group of scientists in Germany discovered a bacterium that was able to digest Polyurethane plastics.

Polyurethane plastics are foamy flexible plastics used in carpet underlays, refrigerator insulation, furniture furnishings, footwear etc. Its flexibility and durability offers great usage for it and the industry itself has a market value of €150 billion in Europe alone.

The experimentation behind the discovery of the plastic eating bacteria

The bacterium, from the genus Pseudomonas, was isolated in three samples from a site rich in brittle plastic waste in Paunsdorf, Leipzig, Germany. After isolation, it was grown in mineral media containing all the essential growth compounds. The bacteria were then screened and grown with 2,4-TDA (2,4-diaminotoluene) which is a chemical used in the production of polyurethane plastic, to test if the compound was toxic. 2,4-TDA was added alongside disodium succinate as a carbon source in the experimental culture, while the control group only had succinate. The bacteria survived without any harm.

After multiple screenings, two different strains that could feed over 2,4-TDA were obtained. One of the strains showed autotrophic growth (self growth, without having to depend on foreigners as a food source), too, and this strain was excluded from further experiments, to make the experimentation clear. Only experimentation on the second strain was carried out further. This strain, called the TDA1 strain, clearly depended on 2,4-TDA. It used 2,4-TDA as a source for carbon as well as nitrogen.

Dr. Hermann J. Heipieper, co-author of the paper describing this research and a senior scientist at the Helmholtz Centre for Environmental Research-UFZ in Leipzig, Germany in a statement said, “The bacteria can use these compounds as a sole source of carbon, nitrogen and energy. This finding represents an important step in being able to reuse hard-to-recycle PU products.”

Moving on, the scientists further tested the TDA1 strain of the plastic eating bacteria for digestion of other structurally similar aromatic compounds (strong cyclic carbon compounds) such as Benzene (occurring in crude oil and gasoline and used to make products like resins, synthetic fibers, drugs, detergents, pesticides etc), Toluene (used in the production of glues, thinners, lacquers etc), Benzoate (used as Sodium Benzoate to preserve processed foods and as Benzyl Benzoate in topical medical treatments), Phenol (possibly the first surgical antiseptic, used as disinfectant in mouthwashes, floor/household cleaners etc) and multiple other compounds. Benzene and Toluene were among the compounds that did not support TDA1 growth while Benzoate, Phenol, o-xylene, catechol were among the seven compounds that facilitated bacterial growth.

The genome sequence was also measured and uploaded on Genomic Sequence Databases DDBJ (DNA Data Bank of Japan) and ENA (European Nucleotide Archive) under GenBank, for other scientists to see and use. Genomic sequencing is very important to understand the nature of the proteins encoded by a certain gene. The genome sequence of the TDA1 strain will help scientists to study the genes that encode for proteins contributing to the digestion of 2,4-TDA. Dr. Heipieper said that their next step towards future research on Pseudomonas sp. TDA1 will be to identify the genes that code for the extracellular enzymes which are the ones working to digest the plastic polymer.

The TDA1 Strain’s genomic sequence was compared to other organisms and it was discovered that two more bacterial species also had similar sequences. Understanding the connection and similarities between sequences is a great way to progress and study the potentials that different organisms hold. It might also provide a way to improve the functioning of the bacterium and to industrially isolate and produce the enzyme in large quantities which, however, is not a piece of cake and may possibly take decades.

There is also the possibility to engineer these enzymes in the Pseudomonas sp. TDA1 to produce environmentally friendly bio-plastics. The team, however, doesn’t plan to do it any time soon. The scientists working over these procedures referred to the bacterial strain as Pseudomonas sp. TDA1. They also stated that according to their knowledge, it is the first case of the isolation of a pure bacterial culture that can digest polyurethane precursor 2,4-TDA.

In the past decade, there have been multiple researches done by several biologists to identify and develop ways to degrade plastic with multiple discoveries of both fungal and bacterial agents. Microbial agents posses great potential to be used in the future for the task under consideration, as these won’t be of significant harm to the eco-system when released, post-engineering, in nature.

Out of the many types of plastics known, some of the most widely produced and consumed are polyurethane (PUR), polyethylene (PE), polyamide (PA), polyethylene terephthalate (PET), polystyrene (PS), polyvinylchloride (PVC), and polypropylene (PP). Scientists’ works have been mainly focusing on these few types of plastics. However, metabolizing microbes have only been discovered for polyethylene terephthalate (PET) and polyurethane (PUR).

Details of some of the studies over plastic eating bacteria and fungal microorganisms are as follows:

A group of scientists from Islamabad, Pakistan, in 2017, obtained some samples from a garbage dump in the city. After isolation and multiple experiments on the fungus, enzymes acting on the PU films were identified. The scientists studied enzyme actions in multiple media and stated that the enzymatic activity was highly dependent on external conditions like temperature, pH etc. A statement by the study’s lead author, Dr Sehroon Khan of the World Agroforestry Centre and Kunming Institute of Biology said, “We decided to take samples from a rubbish dump in Islamabad, Pakistan, to see if anything was feeding on the plastic in the same way that other organisms feed on dead plant or animal matter”. This was believed to be one of the safest microbial degradation agents. The research article is available at Science Direct.

In 2016, a team of researchers from Kyoto Institute of Technology and Keio University, collected samples of polyethylene terepthalate (PET) debris from a plastic bottle recycling factory. They examined and studied these samples and discovered the bacterium Ideonella sakaiensis which had the ability to metabolize PET plastic as it digested the plastic into two of its subunits i.e., terepthalic acid and ethylene glycol. The enzymes, PETase and MHETase acted on the one of the carbon-oxygen bonds in PET to release the two subunits, a hydroxide and a hydrogen ion. The research article is available at NCBI.

In 2015, a group of Moroccan scientists obtained samples of Bacillus subtilis from the Laboratory of Microbial  Biotechnology of Faculty of Science and Technology, Fes, Morocco. They tested the efficiency of the bacterium using Scanning electron microscopy (SEM) and IR (Infra Red) Spectroscopy. SEM and IR were used to study how Bacillus subtilis changed the plastic surface. The teams’ results showed that the bacterium despite not being even considerably good at degrading PUR, still possessed the ability to do so.

The fight against plastic has been long as it is one of the worst compounds for our environment and professionals from many fields are working to address the issue of plastic pollution. However, the industrial use of plastic eating bacteria is fairly distant into the future and so, all of us collectively need to realize our own social responsibilities and limit the waste that leaves our homes in order to preserve a better world for our future generations.

The research paper describing the study behind the discovery of Pseudomonas sp. TDA1 can be read here.

The Airpods Pro vs Airpods 2 debate; which one to go for?