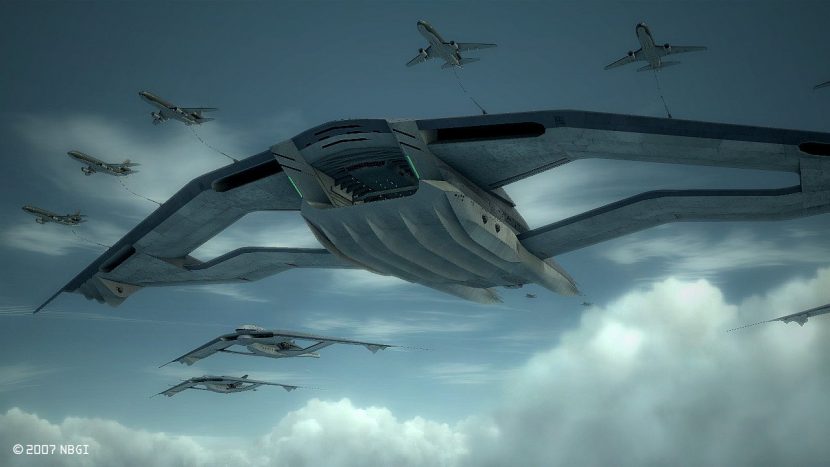 Ever since the dawn of science fiction, we have seen unimaginable ideas poured into books and films, making us drool over what the future could hold in reality. Science nerds who are into warships and aircraft remember such sensational war beasts like The Avengers, the Prydwen from Fallout 4, or even the unnamed mobile airstrip from Sky Captain and the World of Tomorrow. With the ability to take on board, carry, retrieve and launch smaller airships into battles, these aircraft carriers could rule the skies and leave any enemy retreat before putting up a good fight. Let’s find out whether a flying aircraft carrier is more than just science fiction.

By the looks of it, anyone with some history knowledge would guess that these aircraft carriers might be “possible in the future“. However, this feat has been achieved in some capacity in the past. So why don’t we see them in the skies today? Or even just hear about it in the news for that matter? Probably because that was a brief, tragic phase of the previous century and it’s best that we take some time off and reflect on why it was such a bad idea.

The idea didn’t quite take off to carry other ships. At the herald of the 20th century, German General created the first rigid cigar-shaped aircraft, inspired by Jean Baptiste Marie Meusnier’s idea of a giant elliptical-shaped airship in 1784. Count Ferdinand von Zeppelin, the creator, called these the “Zeppelins”. These aircrafts had a solid internal frame and could stay airborne longer, cover longer distances and carry heavier cargo. Naturally, the Zeppelins were designated to carry bombs during wars. These made for obvious targets thus, requiring their own security aircraft. What better way than the Zeppelins carrying their own security escort airships on board and launching where needed? Hence, the idea of aircraft carriers was conceived.

Under The British Imperial Airship Scheme of 1924, to improve air routes between the colonized countries, an airship was envisaged that could carry five fighter aircrafts in military use. 17 such aircrafts were contemplated but only four were ever built. HM Airship No.23 was the first among the three that successfully conducted manned and unmanned Sopwith Camel fighters’ launch. All of these were decommissioned by 1920 for various reasons.

The U.S worked on its own versions of flying aircraft carriers and came up with two very promising beasts of the Akron class; Akron and Macon. This was after defeating Germany and receiving the USS Los Angeles as war reparation, that the U.S was able to build their own versions.

This flying aircraft carrier was commissioned into the US Navy on November 25, 1924, at Anacostia, D.C. After its arrival, the lifting gas was switched from hydrogen to helium. This improved its safety at the cost of payload. USS Los Angeles was used for testing the trapeze system developed by the US Navy. This was to launch and recover fixed-wing aircraft from rigid airships. The success of these experiments paved the way for the purpose-built Akron-class airships. Not only was this aircraft subject to testing, but it was also used as a training ship for other ships. The airship was decommissioned in 1932 as an economy measure, but recommissioned for a few more years of service until being dismantled in the hangar. To date, it is the longest in-service aircraft of the U.S.

USS Akron was the first of the class of two 6,500,000 cubic foot rigid airships, the Akron-class, built in Akron, Ohio. Akron was commissioned in late October 1931, initially for the purpose of naval scouting, however, after completing over 300 hours of flight, it was reassigned as an airship carrier.

Akron met a few accidents during its service, even fatal ones, but survived. In 1932, Akron was based on the West Coast and lost two sailors in an accident during a fleet exercise. Later that year, another accident took place while leaving the hangar. In the previous year, the carrier was docked in San Diego where it unexpectedly took off, dragging three men with it. Two of them fell to their deaths. Akron wasn’t quite lucky the fourth time, in April of 1933, when it crashed tail-first into the sea while facing a violent storm over the New Jersey coast. Only three of the seventy-six men on board survived this tragic accident. Akron’s remains are still visible on the Continental Shelf, nearly seventy years later.

The flying aircraft carrier was featured with a distinct ability to launch and recover fighters mid-air. The smaller airships were pulled into the Akron’s internal hangar as they flew up with a matched speed of the carrier and the pilot attached them to a T-shaped mount.

Macon, named to honour the city of Macon, Bibb County, central Georgia, was commissioned a month and a half after the Akron crash. The flying aircraft carrier was commanded by a survivor of the Akron, Lt. Cmdr. Herbert Wiley. USS Macon stayed mission-ready and participated in many fleet exercises in her two years of service.

Macon demonstrated its concept of operations via the “trapeze” method that the crew used to recover the planes in Akron, launching and recovering five single-seat Curtiss F9-C Sparrowhawk biplanes. Like its Akron counterpart, Macon’s internal hangar was located about two-thirds of the way behind the nose of the airship. It could also launch and retrieve five aircrafts through a T-shaped opening at the floor of the hangar.

The aircraft carrier met its fate as it encountered a storm off Point Sur, California. Caught in wind shear, the gust managed to cause great structural damage, eventually tearing off its upper fin. The damage was sufficiently disastrous to soon bring its crashing down into the sea. Luckily, all but two of the sixty-six crew made it out alive, thanks to the life jackets placed as a lesson learnt from Akron.

The Lockheed CL-1201 design is one of the most outlandish aircraft designs to have ever been designed. This gigantic beast was proposed as a nuclear-powered flying aircraft carrier that was designed to stay airborne for 41 days, with a wingspan of 1,120 ft. and a length of 560 ft. In addition to the four giant dual-propulsion turbofans, Lockheed CL-1201 would also flaunt 182 lift jets in an attempt to shorten the takeoff run. Such a marvel would obviously require a tonne of energy to keep airborne. The solution to this? A nuclear reactor that would generate and transfer heat to four jet engines where it would superheat the air passing through to provide thrust. This design could carry 22 fighter aircrafts externally topped with an internal dock capable of handling a further two air-to-ground shuttle transport aircrafts.

Another similar model of this version was the logistics support variant, assigned a more conventional heavy transport role; carrying hundreds of troops and their equipment to the war zones. All of the above definitely would make the Lockheed CL-1201 a wonderful enemy target, yet its defensive armament was never fully disclosed. Some hint the use of AIM-54 Phoenix missiles for self-defence as well as its own aircraft order. This aircraft carrier was seen to completion and faded away. Probably was not worth the possible disasters that glared back, like the exhaust would be radioactive and fly all over the land below. Also, in case of a very likely, eventual crash, a nuclear-powered aircraft would do more harm than intended.

The maiden flight of the B-36 Peacemaker took place on the 8th of August 1946 while it went into service in 1949. It was built in response to the U.S. Army Air Forces’ requirement for a strategic bomber with inter-continental range, supposedly to target Berlin. This giant weighed an astonishing 410,000 pounds, fully loaded with fuel and ordnance, and had a massive wingspan of 230 feet, the longest wingspan of any combat aircraft ever built.

It was big enough to be easily considered as an aircraft carrier, allowing up to four McDonnell F-85 Goblin parasite fighters. The B-36 was capable of inter-continental flight without refuelling, owing to its vast range of 10,000 mi (16,000 km) and a maximum payload of 87,200 lbs (39,600 kg). This airship soon faded into obsoletion as such long-range aircraft were no longer needed after the advent of mid-air fuelling.

The complete background and fate of this massive marvel is depicted in full detail here:

At the turn of the 1970s, Boeing came up with a rather eccentric project. Boeing planned to convert its jumbo jets into flying aircraft carriers. The Airborne Aircraft Carrier project aimed at converting the largest passenger jet that was currently in service, the Boeing 747, into a flying aircraft carrier. It would launch and retrieve as many as 10 micro-fighter jets and could be easily sent off, fully equipped with combat-ready jets, to a crisis zone for a swift response or backup. The Boeing 747 would employ an internal conveyor belt system that would launch two fighters every 80 seconds, dispatching the entire 11-fold air wing within 15 minutes.

While the studies proved the feasibility of this project, the lack of flying safety at the time forebore the materializing of this concept. Risking the safety of 11 planes and pilots was simply a risk too big to take.

With the ongoing development of China’s area denial bubble to actively prevent U.S. carriers from sailing close enough to Chinese shores to launch sorties, the U.S has found itself in bind. This led the Defense Advanced Research Projects Agency, or DARPA, to revert to once-abandonned idea of flying aircraft carriers, in order to deploy their fighter aircraft for a possible conflict.

Under this program, the efficacy of low-cost combat-capable drones is being tested out that can be both deployed and recovered from cargo planes such as the C-130. DARPA aims to develop a mothership that would carry these combat ready drones close to enemy defence lines, and launch and retrieve the drones after they have played their role in the battle, to be carried back for repairs and maintenance.

So are flying aircraft carriers making a comeback?

Well, yes and no. The Gremlin itself was completely destroyed during the test as its parachute failed to open. This was only after the completion of an hour-and-a-half flight. Another test to master the drone recapturing was scheduled for Spring of this year, however, as with literally every other schedule in the world, COVID-19 had other plans.

Are flying aircraft carriers even worth it?

Of course, the Sci-Fi fiction and movie magic revolving around a giant mothership with its deadly little jets have us drooling. Many of us would want to see stuff like that hovering in our skies. Yet, the truth is, there is not much practical use for such aircraft carriers anymore (though America would disagree). Mid-air refuelling has been the shortcut that aviation universe’s predecessors missed out on. Even inter-continental flights are much easier today than they were at the time of the conception of flying aircraft carriers.

Going beyond that, fictional technologies like mobile airstrips and runways seem to make even lesser sense now. Nobody wants to hand out easy targets to their enemies and if, for a second, we do contemplate about such things, it would practically bankrupt any nation to match the visual aesthetics of fictional a flying aircraft carrier or runway. We may also have to defy some laws of Physics while we’re at it. “Futuristic” technology can never be accurately prophesized, especially in books or movies. However, the mystery of what technological feats the future holds is still invigorating.

There is more to an electric eel than we know!