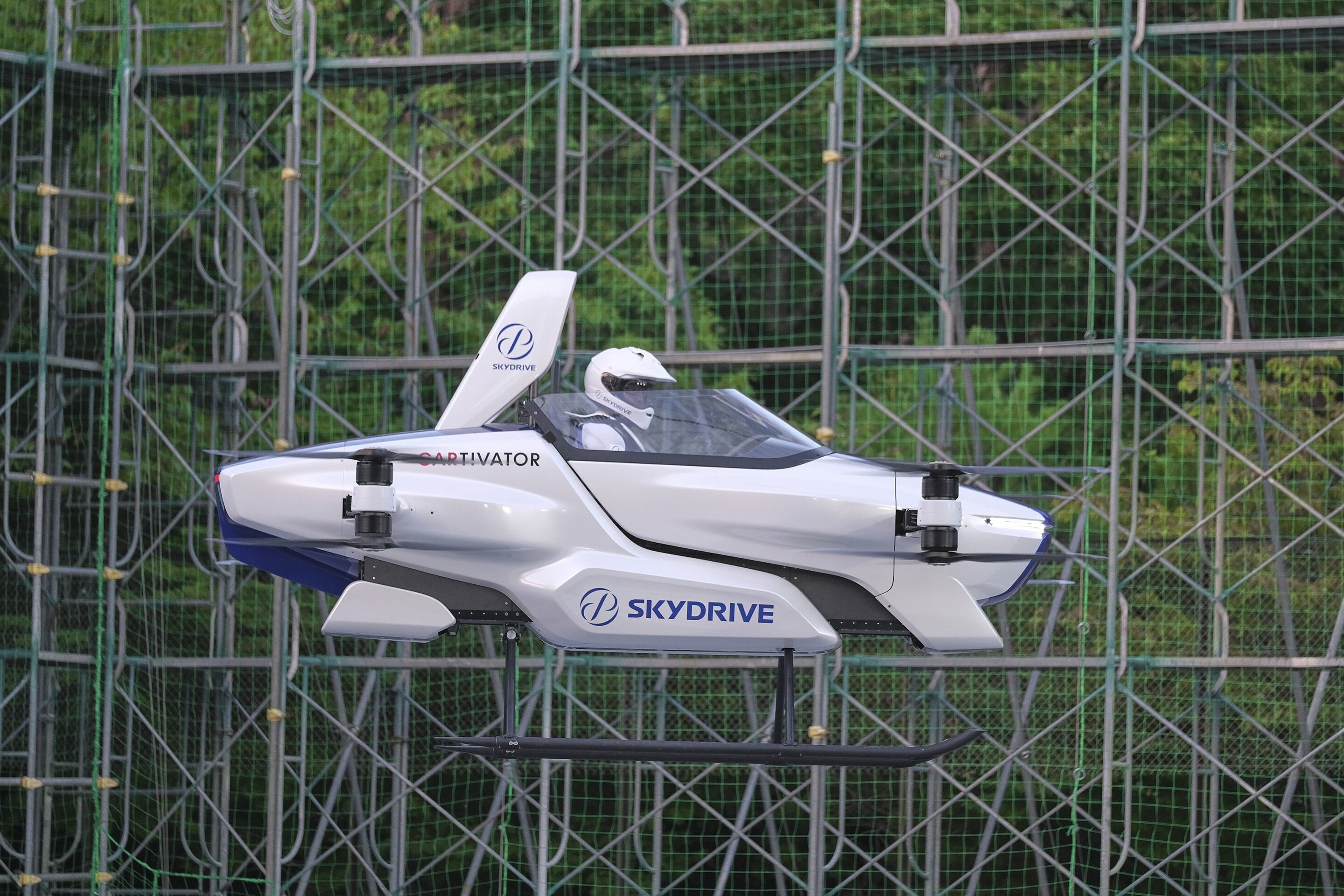 At, at least, one point in our childhood, we all have fantasized about traveling in, if not inventing, flying cars. The concept can be seen in multiple movies and stories written for both children and adults. Name any medium or form of multimedia and you’ll find references to flying cars in it. Maybe our childhood dreams were inspired by these ideas and cartoons. Elon Musk said that the inspiration behind Neuralink was a science fiction novel series called The Culture, a new era of the human age inspired by a fictional book. Moreover, sending photos from Australia to America in seconds was never possible and would’ve been considered total magic 100 years ago, but as the saying goes “Magic is just science that we don’t understand yet.”

Just like this, Japan has brought to life multiple non-existent concepts; these include, but aren’t limited to, bullet trains, LED light technology, hand-held computers, car navigation systems, and electronic calculators.

While not really a new invention, Japan recently had its first flying car get a manned test flight. The flight took off on the 25th of August and stayed in the air for about 4 minutes. The Japanese flying car prototype named SD-03 was engineered by a company named SkyDrive. The credit for its creation and success doesn’t just go to the engineers who created it but also to the Japanese Government who had been active for the advancement of Air Mobility technology, and even put forward the idea of making and commercializing flying cars by 2023, during their Public-Private Conference for Air Mobility.

The world debut of the Japanese flying car – The SD-03

The announcement was done through a Press Release, by SkyDrive, titled “SkyDrive Conducts First Public Manned Flight in Japan – SD-03 manned model makes its world debut”. Let’s have a look at the debut video below:

What can be seen in the video is a man piloting the SD-03 into the air smoothly, without even a tiny jerk. The SD-03 is SkyDrive’s second tested and successful product. The first one was a cargo drone with a loading and carrying capacity of 30kgs. After this success, they started working on one with a carrying capacity of 100kgs. And now, the SD-03. The SD-03 is a single seater super small vehicle that runs on electricity; it is an eVTOL or an electrical Vertical Take-Off and Landing vehicle. The controls of the vehicle are computer-assisted for better flight stability and security. 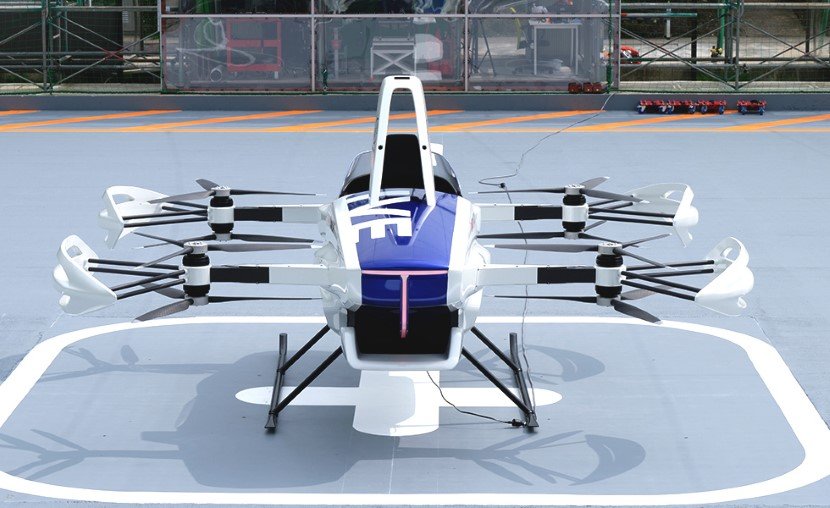 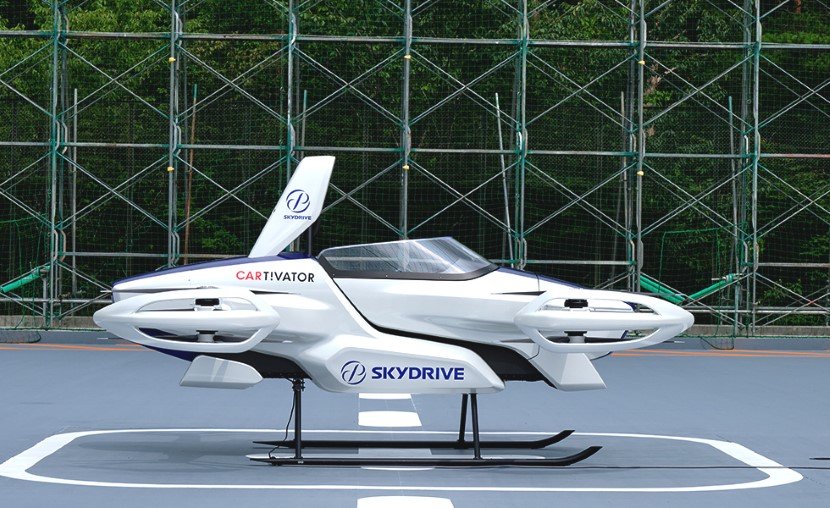 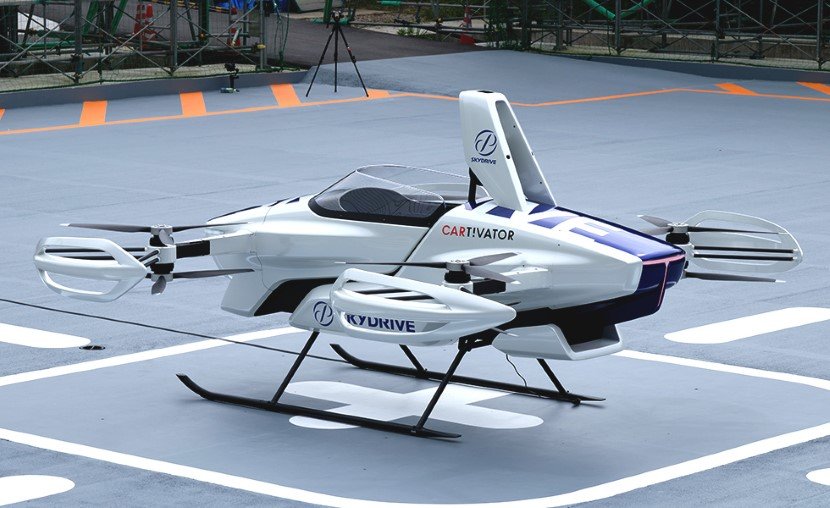 The SD-03 is the world’s smallest eVTOL, being only 4 meters in length and width, with a 2 meter height. Overall, it is pearl white and super sleek; the design is made to suit the flying car for take-off, landing and propelling it through the air. On the front, the SD-03 boasts two headlights and a central light designed more for aesthetics than to help with navigation. There is also a red light on the base of the car, for identification from the ground. On the top and on both sides are logos and emblems of SkyDrive; the sides also feature the Cartivator logo which is the original volunteer group where engineers interested in flying car technology worked together and then later came together to form SkyDrive. 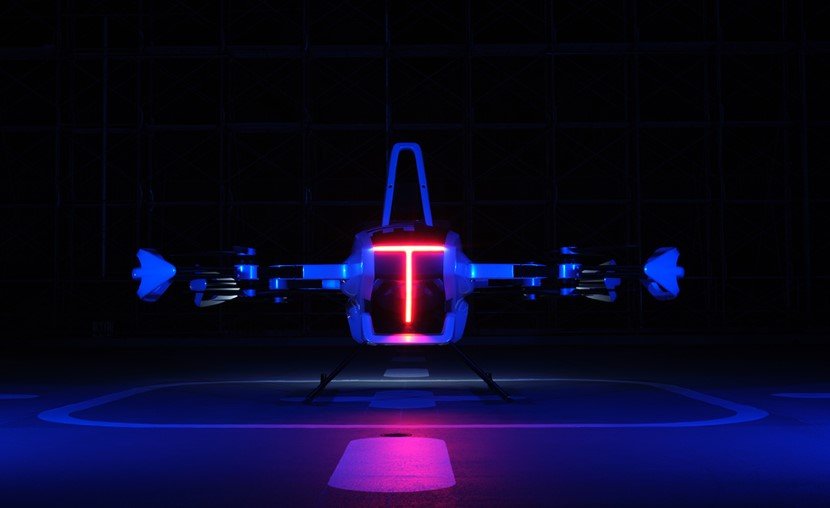 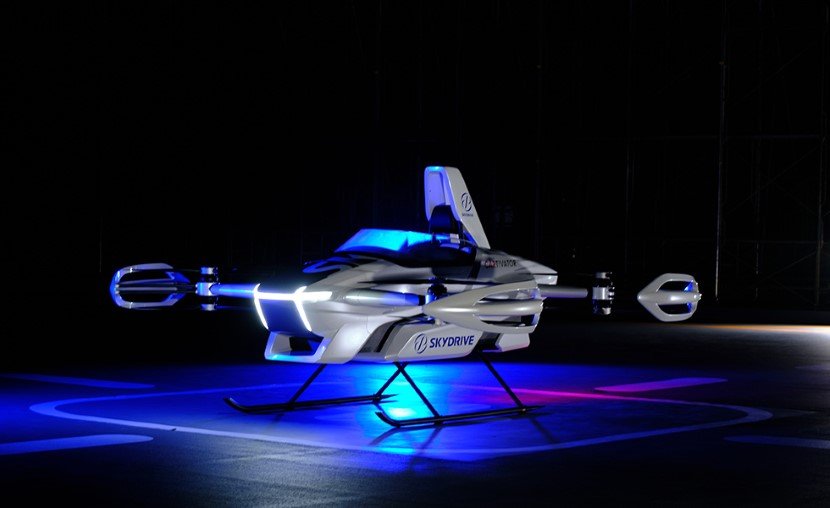 To run the flying car, the energy is provided by 8 electric motors which are used to work eight different rotors that work in pairs and are installed at four separate locations. In each pair, one rotor rotates clockwise while the other one moves anti-clockwise. Such a system is used so as to provide more safe functioning, especially, in cases of emergency, and also, so that the vehicle doesn’t get caught up in any regulatory issues. 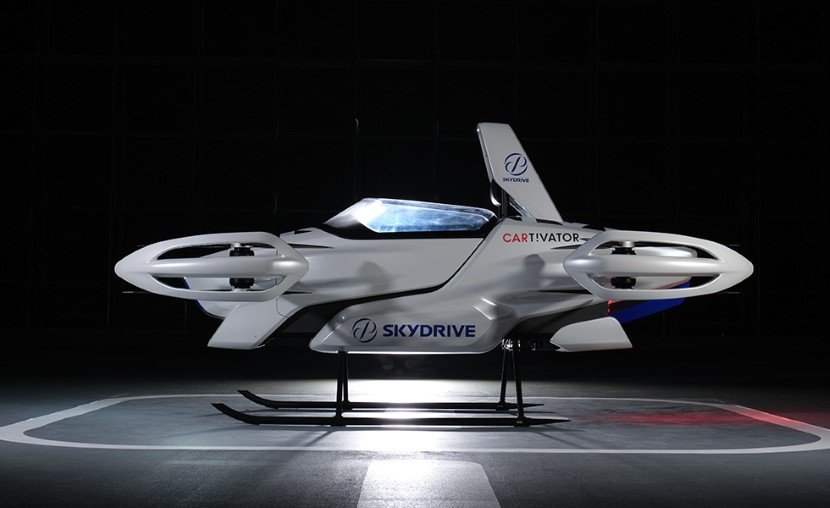 The first public manned flight of the Japanese flying car

This first public manned flight of the SD-03 Japanese flying car was set up at the Main Toyota Test field in Japan. This test field is one of the largest test fields in Japan and covers an area of approximately 10,000 square meters or 2.5 acres. The flight lasted for about four minutes with the car going up to an altitude of almost 6 feet. Despite being short and not very high soaring, the demonstration showed that the SD-03 could take off and sail smoothly and untethered without any problems. According to Forbes, the SD-03 has a stability like that of a drone, which is pretty good considering the control and stability that drones have been providing us with.

Despite SD-03 being a great product in itself, the Chief Technical Officer of SkyDrive says that this flight was “the culmination of SkyDrive’s achievements for technical verification”, mainly to allow them to work better on achieving their bigger future goals.

What does SkyDrive plan for the future – both, ours and theirs?

According to SkyDrive, the design of SD-03 is made to represent the clouds and white birds that soar high up in the sky when travelling; better, longer and higher altitude flying is SkyDrive’s concept for their future productions. While their ultimate goal is the commercialization of flying cars by 2023, alongside the introduction of air taxis, their current next goal and also the model behind SD-03 is the SD-XX SkyDrive Concept Model which is a double seat eVTOL. 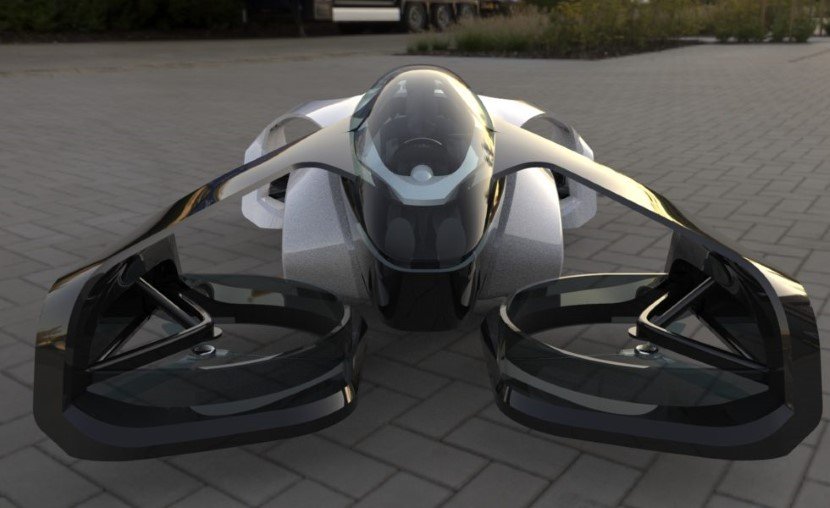 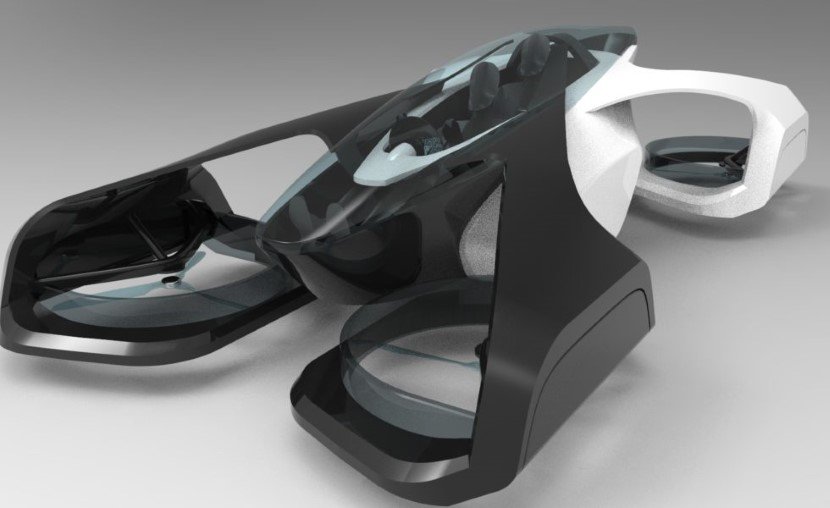 SD-03 flying car was born from the SD-XX Concept Model!

The Concept Model, or the potential flying car of the future, is actually planned to be smaller in size than the SD-03 by 0.5 meters width. Additionally, it is said to have double the number of propellers than the SD-03; the SD-03 has 4 while the SD-XX Concept Model is designed with 8 propellers. Having double seats, it is designed to carry a weight of almost 500kgs and to have am altitude of almost 500m. 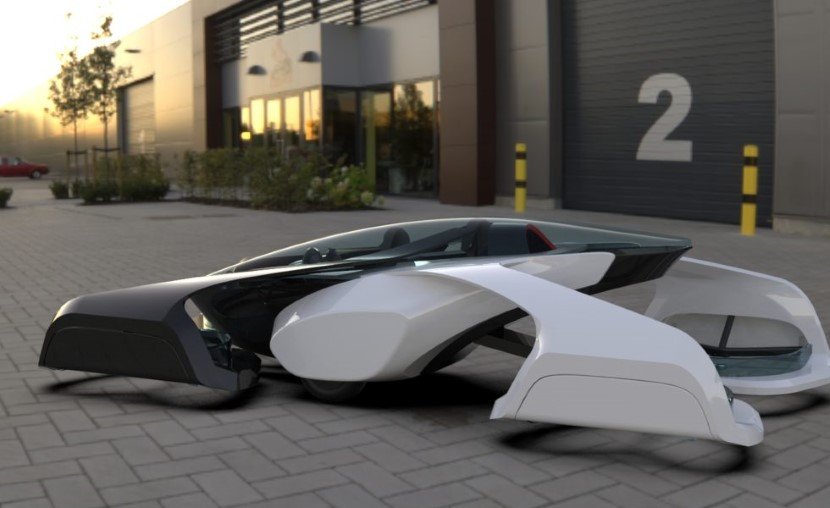 If a vehicle with these features makes it to the markets, then surely it will be a game changer in the flying car industry. Why wouldn’t anyone prefer a flying car with 60km/hr speed over any car which may have to face traffic signals or blocked roads, any day, without a warning?

The Best and the Most Budget Friendly Gaming Mouse of 2020