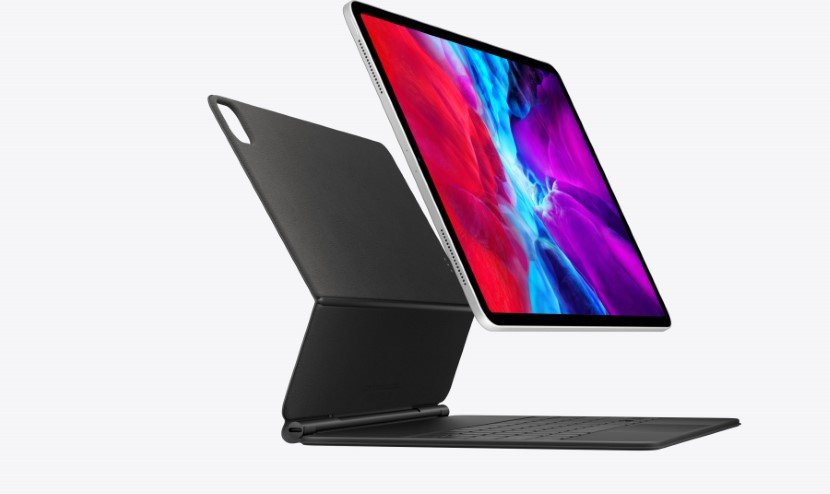 Apple upgraded its iPad Pro line-up in March 2020 to a much refined version which resulted in a 2-in-1 tablet. The new iPad Pro comes with a faster A12Z Bionic processor, dual rear cameras, better audio, LiDAR scanner with improved AR abilities, and a discretionary Magic Keyboard for the first time, which adds a trackpad to the iPad. The new iPad Pro with Magic Keyboard feels a lot like a laptop, but is it good enough to replace the laptop itself?

Apple has introduced a new Magic Keyboard in the iPad Pro that comes with a trackpad, mouse support, backlit keys and a scissor switch mechanism consisting of about 1mm key travel. You can now use the new iPad Pro like a laptop with the help of a Magic Keyboard. The keyboard appears to be what consumers have been asking for all along; a decent and durable attachment that gives it more of a laptop-like feel. Its magnetic floating design is what attracts one the most. The keyboard can be removed or attached whenever you want as it can easily be attached to the screen magnetically.

With an upgraded keyboard and the presence of a trackpad, the iPad pro allows its users to have an experience very similar to a MacBook with only some slight differences. This Magic keyboard is not exactly the same as the one that comes with the 16 – inch MacBook pro but it still has an identical scissor-switch mechanism. The physical feeling of the keypresses is superior than any other keyboard out there as the quality of key presses is unlike any other keyboard attachment available, and matches what you get on a MacBook.

Let’s have a look at what it actually looks like.

The Magic Keyboard and Trackpad

In the process of upgrading the feel of the keyboard, Apple had to compromise on the traditional thin outlook of the device. The keyboard is finally made to be backlit where the brightness adjusts itself according to your lighting situation, but you can always adjust the brightness and other conditions manually from the settings. With all the attention given to the feel, Apple neglected to add a function row to the keyboard. This means that you do not get an Esc key but you still have the option of remapping and assigning one of the other keys to act as the Esc key.

If you are used to the trackpads on MacBooks, then you might be a little disappointed with the trackpad on the new iPad pro since it’s much smaller in comparison. The iPadOS supports the trackpad very well and it works smoothly without any lags.

Besides the traditional functions of the trackpad, it also has other features like:

Although there is a bit of an adjustment period when you start off, as you may end up accidentally sliding onto other apps, but you quickly get the hang of it.

The hinge design of the new iPad Pro keyboard

With the way the magic keyboard is structured, it may give the impression that it does not have the most stable structure, however, that is not the case. The hinge design is actually wobble free as the keyboard deck has zero flexibility owing it to its one of a kind floating screen. Furthermore, you can tilt the screen up or bring it closer while using the touchpad.

You can adjust the screen of the laptop between 90 and 130 degrees which can be a little harder to adapt to if you are used to pushing the screen all the way back.

On the hinge, there is a USB-C port that is capable of pass-through charging. You would still have to use an external device in case you need to transfer data. As a whole, the iPad pro and magic keyboard are much thicker than a full-sized MacBook Pro which is not too big an issue, as you can detach the keyboard when you need to carry it around. Although, if you are at home and lounging around watching videos, you can easily get rid of the keyboard; a feature that you don’t have on a MacBook.

The software on the iPad is equipped to perform a broad selection of laptop or tablet based tasks but the hardware part of it is best suited for only laptop based tasks. Moreover, you can easily position the iPad Pro at a small angle and use it to draw. You can even connect it to an external screen and it could be used as a desktop device.

Benefits of using the new iPad Pro with magic keyboard

There are multiple advantages of using the new iPad Pro than the traditional Macbook. For instance;

In a nutshell, the 2020 iPad Pro with the magic keyboard is an iOS tablet to begin with. However, it most certainly has the capabilities to replace the MacBook Pro if you don’t rely highly on high-end bequest apps or in-house software. Even though the New iPad Pro with Magic Keyboard weighs a little more on the price side, it is very convenient to use and it certainly is an improvement from its previous versions. With only under $1200, you can get the 11 – inch iPad Pro with the magic keyboard.