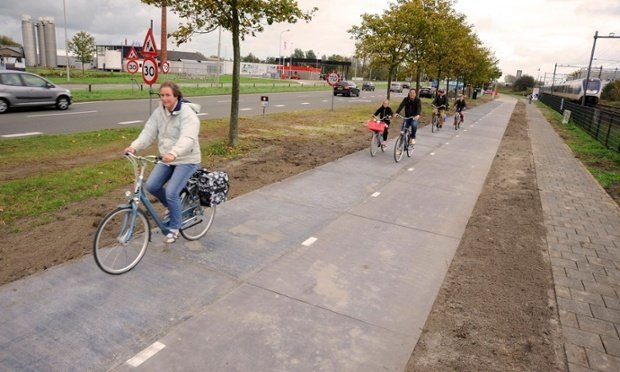 Netherlands might have brought an excitement among the tech savvies with the inauguration of the world’s first bicycle path made completely out of solar panels which will indeed help to produce electricity. However, there are serious concerns about the effectiveness and efficiency of this entire system.

As for now, this Two-Hundred and Thirty feet long bicycle path built by SolaRoad comprises of rows of crystalline silicon solar cells housed within concrete and covered with a luminous layer of hardened glass. Now, this glass has to be tough enough to withstand the load imposed by thousands of cyclists riding down this path every day.

These stainless-steel knives by Deglon, nest into each other…

Talking about the efficiency of this entire setup, it will cost around $3.7 million once the path is fully stretched out to 330 feet in 2016 and will generate enough electricity to power three households. What? Just three households at a cost of $3.7 million? That’s more than 1,000 times expensive than the price of rooftop solar electricity in the United States.

For maximum output, it’s always advisable to have the solar panels tilted in the direction of sun. But another problem with these solar paths is that the panels aren’t facing towards the sun and according to The Guardian, these solar panels are expected to produce 30 percent less electricity in such orientation than conventional panels. Also, there is more of a stronger chance for these solar panels to get covered in dirt, mud, ice and snow reducing the efficacy even further.

Craig Morris at Renewables International insisted upon the idea of installing solar roofs over the bike paths than to entirely laying down the solar paths. In his opinion, it would be easier to install solar panels on the roofs at the desired angles with little probability of getting covered in dirt and mud which will allow to produce more electricity with less trouble.

Right now, it’s difficult to predict the future of solar paths or solar roads. Will they ever be rendered as a useful source of electricity production? We’ll have to wait until then.