The undeniably increasing amount of plastic being generated and used has led to an urgent need to reduce the production and to come up with better alternatives. A supermarket chain based in the U.K has made efforts to stop plastic waste production. Co-op is now going to replace the single use plastic bags with reusable and compostable shopping bags that are biodegradable in nature and will fail to sustain in the environment for too long.

Landfills are piling up at an exponential rate with the amount of plastic being generated. Co-op is going to cut down this amount by 60 million plastic bags after the replacement. The idea is first going to be implemented in Wales, England and Scotland which will later move on to the rest of U.K. Ever since 2014, Co-op has tried multiple other versions of this bag and is sending them out to locations where local food companies will accept them.

These biodegradable bags come under the umbrella of a larger plan to eliminate the damage being done to the environment. The steps needed to attain this goal include managing healthy eating, food waste and finding efficient energy saving methods. 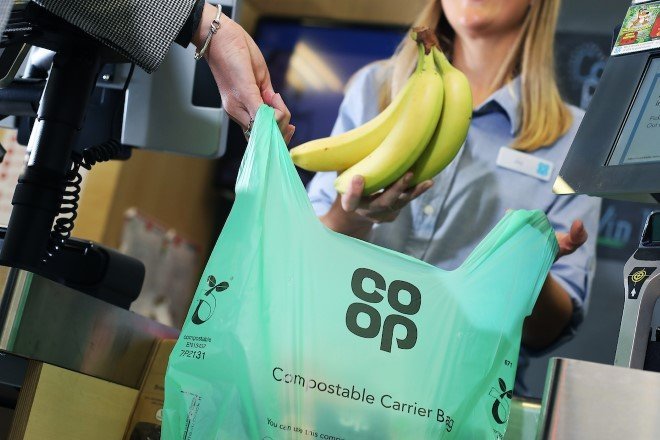 Hälssen and Lyon’s Tea Calendar Gives A Creative Twist To…

These unique sunglasses are purely eco-friendly!

The final plan is to completely eliminate the use of plastic bags in the span of the next five years and to stop the sales of black plastic which is the most difficult type to recycle. By 2023, they aim to get completely rid of plastic and to use a minimum of 50% of their recycled plastic to make other products like pots and bottles.

Other supermarkets are also working towards this goal by implementing various methods. For instance, Lidl U.K. has decided to stop using plastic trays for fruits and vegetables and to displace any plastic being used in their meat section. Asda claims they are halfway through their plastic reduction goal along with Waitrose which is also doing its part to help save the environment by stopping the use of plastic to carry loose vegetables.