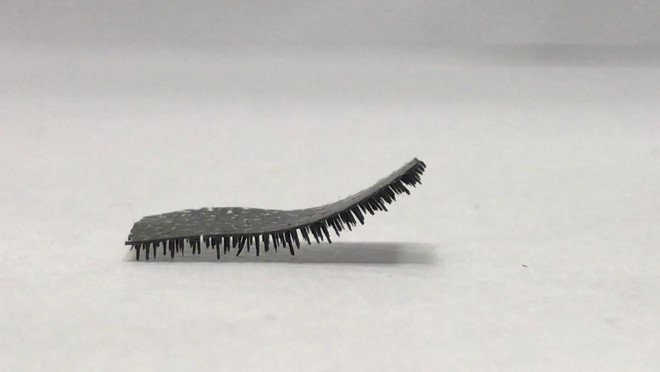 If the thought of a robot invasion scares you, then you’ll be petrified to know that tiny robots might be living inside your body in the near future.

However, it’s not so disturbing when you get to know that those bots will actually be crawling and swimming in your body to deliver drugs and seal open wounds. Yep, you read it right. Researchers from City University of Hong Kong have developed a caterpillar shaped instrument, to provide treatment only on the targeted areas and reach inaccessible places without having to operate.

The robot measure 17 mm long, 7 mm wide and has a height of about 1 mm (0.7 x 0.3 x 0.03 in), which is taken up mostly by its hundreds of miniature, pointy, cone-shaped legs. Made from a soft silicon material and filled with magnetic particles, the robot maneuvers through the body using a magnetic force that helps it propel in a flap pattern-where it raises its front section to drag itself forward. The robot is also capable of moving in an inverted pendulum pattern where it rocks itself forward by alternatively tilting up onto its left and right legs.

Luckily, we won’t be able to feel the robot crawl in our body, thanks to the smart design that uses tiny legs instead of one large foundation. This quality reduces the friction by about 40 times that of limbless machines like the “milli-robot” that was released earlier this year. Having little surface contact also allows the device to swiftly swim in fluids such as blood or mucus.

The Most Common Questions Asked In Every Job Interview…

According to Wang Zuankai, author of the study, “Both the materials and the multi-leg design greatly improve the robot’s hydrophobic property. Besides, the rubbery piece is soft and can be cut easily to form robots of various shapes and sizes for different applications.”

During the testing phase, the robot possessed the capability to climb over objects taller than it was, by lifting its front part up to a 90-degree angle and then propelling upwards. This is a huge benefit, as the bot will easily maneuver through the bumpy human body with ease. Additionally, tests found that the bot will be able to lift and transfer heavy objects, even those that are a 100 times heavier. These essential features will allow it to deliver drugs to a designated spot in no time.

The researchers are continuously working on adding more functions in their creation such as changing up materials so it biodegrades after its job is done, or identifying the different shapes it can adapt to make the drug-delivery process more efficient.

Interested individuals can find the team’s research published in the journal Nature Communications.