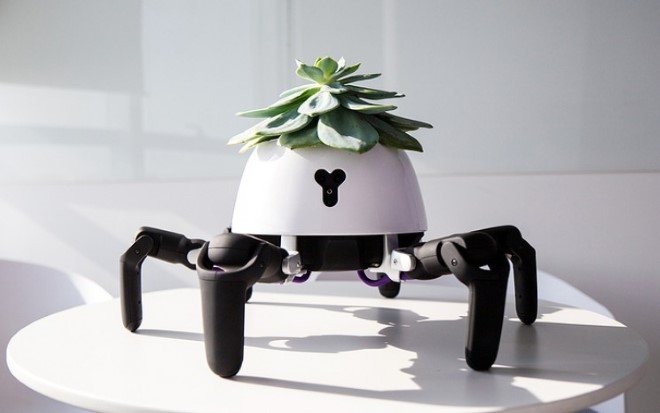 As most science students know that plants are “heliotropic”, which means they grow towards light. However, what if we found out plants could move independently despite having roots?

Although, science hasn’t gotten this far yet, but humans are on a mission to slowly get to this stage. Chinese roboticist and entrepreneur Sun Tianqi’s company Vincross recently unveiled a hexa-legged toy robot that carries a potted plant on its head.

This adorable robot looks more like a crab than a “pot”. With its L-shaped legs, it crawls like a spider towards the sunshine when needed and retracts into the shade when the plant has had enough. Apart from doing its job, the robo-crab will even play with you if you tap its carapace. Once robot Bulbasaur runs out of water, it performs a little dance to let its human know.

Most spoken languages in the world and interesting…

Brace yourselves! Jetpacks are now a reality and you can…

Tianqi’s inspiration came from seeing a dead sunflower at an exhibition that was lying in the shadows. He stated, “Plants are usually eternally, inexplicably passive. They have the fewest degrees of freedom among all creatures in nature”. If you mess with a cat, it’ll jump at you. However, plants are one of the few creatures that can’t do anything even if you cut them, burn them and pluck them all out. He believes that new innovative technology can provide plants with some autonomy and aid in their survival. Which is why, Tianqi called the project “Sharing Human Technology with Plants”.

With a robotic rover base, plants can experience mobility and interaction,” writes Tianqi. “I do hope that this project can bring some inspiration to the relationship between technology and natural default settings.”

It’s still unclear from the maker’s post as to how the robot is able to make deductions about the environment. However, in this day and age of technology, we assume it wouldn’t have been too difficult for him to integrate these functions using light, shade and moisture sensors. What we do know is that the robot is equipped with infrared and a 720p camera with night vision. Each spider leg comes with three motors and has 19 servos.

Tianqi’s new technology might make us see plants in a better light (literally) and we might find it easier to take better care of them. However, this invention doesn’t come cheap. It’s basic version costs $950-and that is without all the new modifications.