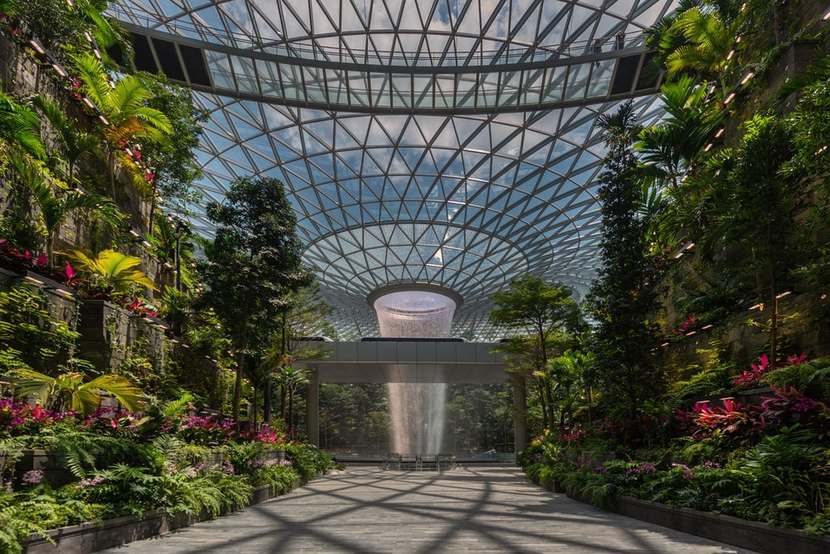 April 17th marked the inauguration of the Safdie Architects-led Jewel Changi Airport project. The project was completed in a time span of 4 years and the well-constructed building with an indoor forest, along with the world’s tallest indoor waterfall, boosts its creativity.

The entire project is based off a building named Jewel and covers an area of 135,700 square metres. The roof of the building is made out of pure glass and steel that curves inwards, much similar to a donut, and spans over 200 m (650 ft) at its widest point. The glass is well glazed in order to ensure maximum natural light floods in without causing any major rise in the ambient temperature. It is also well tested to make sure that there is no glaring by the glass which could lead to distractions for pilots and air traffic controllers.

Standing 40 metres tall is the waterfall which highlights the beauty of the building. The HSBC Rain vortex collects 10,000 gallons per minute of water that it encounters during heavy rain and allows it to cascade down. This water is subsequently used to irrigate the forestry inside and for keeping the interior cool.

On a whole, the Jewel contains a total of 2000 trees and palms along with 100,000 shrubs from all parts of the world including Australia, China, Malaysia, Spain, Thailand and the USA. It took a great deal of time, money and effort to have these plants imported.

In Tenta’s DROP Box micro cabin can be shipped and…

Baragaño’s prefab house is clad in vertical timber slats and…

“When we were choosing the plants to feature in Jewel, we had to consider different criteria including aesthetics and their ability to thrive within the complex given its light levels, temperature and humidity conditions,” says Jeremy Yeo, Head of User Experience, Jewel Changi Airport.

The trees were trimmed down in order to fir the containers so they could be easily transported. When they reached Singapore they were made to adapt, in an off-site nursery, to the current temperature and environmental conditions so they could easily survive the tropical weather.  The transportation took around 9 months and the trees were kept at the nursery to acclimatize for 2 years. This was an important step in deciding whether the plants would be able to survive the indoor conditions of Jewel.

A few of the firms who were also a part of this project were BuroHappold Engineering, Atelier Ten, RSP Architects Planners and Engineers, WET and Peter Walker and Partners.