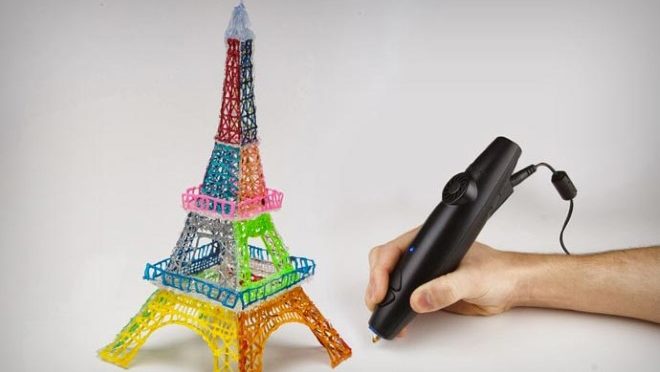 Not long ago we wondered what miracles can technology do, as we witnessed things emerge which once existed just in our imagination. Now the pen that can draw in 3D has popped out of our imagination and has landed into our hands! Thanks to Maxwell Bogue, Daniel Cowen and Peter Dilworth for inventing and publicizing the 3Doodler printing pen which enables us to draw in the air.

We all have experienced that necessity is the mother of all inventions, so was the case in birth of this tech pen. The founders experienced trouble with the traditional 3D printer and set out to solve the problem they faced by assuming that it was being faced by billion others. However, little did they know that along with solving a problem they were giving designers, artists, engineers, etc a whole new kind of tool to spill out their imaginations! After all, who hadn’t dreamt of having a magical pen which can draw out anything in the air!

SEE ALSO: Do You Snore Loudly while asleep? This 3$ Device Can Help You Sleep Better

Some important uses of this 3D pen include the creation of Braille learning aids for the visually impaired, using it in classroom for more interactive lessons and producing astounding apparels and fashion wear.

‘Skysphere’ takes inspiration from a treehouse…

Let’s have a quick look at how this wonder pen works. This slick design pen works the same way as a traditional 3D printer but now you don’t need complex computer programs to draw for you. All you need is your imagination and a free hand. The pen is filled with the petroleum based plastic called acrylonitrile butadiene styrene (ABS) which melts upon pressing the button and oozes out of the nozzle while you draw in air. Initially the plastic is hot but it cools down quickly owing to touch with air and the UV rays at the pen’s nib helps to cool faster. Due to high tip temperature this pen is not recommended for children below age 8.

The company is continually working on improving the design, also it is collaborating with the wire-artist community to showcase the world endless opportunities this pen has to offer and it also plans to offer stencils to help in learning the use of this pen.

‘Aipoly’ – A Smartphone App that Gives Eyes to the Visually Impaired