Obesity has become a serious issue, especially in Great Britain. According to the World Obesity Forum, the number of obese Britons are expected to increase from 32 million to 36 million by the year 2025.

Some people find it very hard to lose weight, and the surgical removal of fat is just a no-no. So, how should one go about it? Well, luckily, we live in the 21st century – meaning there’s always an alternative. Now, this solution may sound absurd but it is much better than opting for surgery. In this technique, all one has to do is take a capsule which contains a deflated Elipse balloon (made from an intricate polymer film). Attached to this capsule is a catheter which is basically a thin tube through which the doctor fills the balloon with water once it enters the stomach. The rest is pretty simple – the balloon occupies most of the space in the stomach thereby reducing one’s appetite and increasing the chances of a person losing weight. The balloon lasts for roughly four months, after which the valve in the film opens and the balloon deflates and passes out through the digestive system. This way, the person returns back to his or her normal calorie intake! 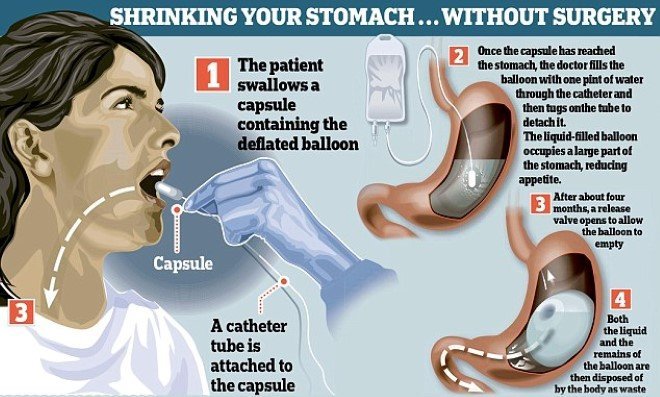 This amusing twist inside Boston Pizza’s delivery box will…

This new method of shedding weight has been approved for use in United Kingdom since it is a non-invasive technique and does not require the user to undergo anaesthesia. Unlike most gastric balloons, this balloon is comparatively much safer to use. However, it isn’t a permanent solution as Professor Mike Lean, an expert in human nutrition in Glasgow University, explained “Balloons definitely help some people to lose weight over a short period. But they cannot have any long-term effect. Once they are removed, or passed out as waste, they have no further effect, so weight goes back on unless the patient has a long-term weight maintenance strategy.”

Created by Allurion Technologies, a US based firm, the Elipse balloon has so far made it to the markets of Europe and United Kingdom. Let’s hope this product is available throughout the world as soon as possible because most of us could use some!

These Galaxy Inspired makeup looks is the latest fashion trend!

Mesmerizing ‘Villa on the Rock, in France comes with a crazy 91-foot aquarium pool