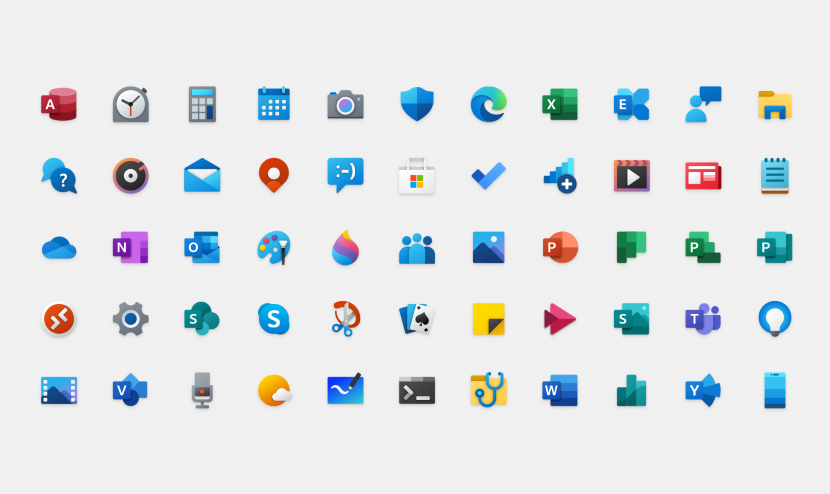 Microsoft is one of the most widely known multinational technology companies. Founded in 1975 by Paul Allen and Bill Gates, the company became the world’s most valuable company when it crossed the $1 Trillion threshold, last year. Microsoft works on Operating Systems for computers. From MS-DOS to Windows 10, they have been controlling computers and other technologies, through Operating systems and other softwares, for decades.

Windows 10 was released in 2015 and Windows 11 is expected to be released in 2020, on July 29th. This period however has come with many other new releases and now, Microsoft just started releasing new icon designs. These designs are mainly meant to introduce a harmony between phone and computer icons and icons on different locations on the computer for example the Start menu or the Task Bar.

“When icons in the Taskbar and Start menu are different styles, it creates more cognitive load to scan and find applications. We needed to incorporate more visual cues into the icon design language using our modernized Fluent Design Language” said Christina Koehn, who is a lead designer for Windows and Devices at Microsoft.

These new icons are bright and reflect Windows approach towards its current aesthetic direction. Designed as part of Windows’ multi-year effort to design its icons, these are being introduced to essentially modernize the Fluent Design Language, which helps build conference across platforms.

GE’s microwave will count calories of your food…

These stunning Gondola Rides let you enjoy the breathtaking…

Icons are simple graphical symbols, but make a lot of difference when people are using their computers. As they are visual representations of certain objects or tasks, they help us to judge, and if they are not pleasing to the human eye and brain, they become visual noise.  Icons control how people perceive tasks. ““Leveraging the Fluent Design System, we introduced depth and color to our iconography,” Koehn explained further, “These additional cues are subtle, but they make a world of difference when scanning an interface.”

Currently only some icons have been rolled out, while in a few months all of the app icons will be revamped. The ones to have their new icons released first are Calculator, Groove Music, Mail, Voice Recorder, Alarms & Clock, Movies & TV and Calendar.
Microsoft is planning to use similar icons for all its apps across all Operating Systems including macOS and Android.

Microsoft introduced new icons for MS Office last year – these can be seen in the video below.

Images: © Microsoft
h/t: The Next Web