Virginia class submarines are the latest stealth mode, deep ocean anti-warfare submarines. They are nuclear-powered and the deadliest underwater equipment by far. Originally, Seawolf submarine was formed as a replacement force to the US Navy Los Angeles-Class submarines for their battles against the Soviet forces. However, there were subsequent change of plans when prohibitive unit cost and changing strategic requirements led the US Navy to adopt a smaller, new-generation attack submarine instead. Babcock & Wilcox (B&W) Nuclear Operations won a contract, to put together nuclear propulsion components for a Virginia class submarine, in February 2013.

There were numerous modification contracts sent by the US Navy to the General Dynamics Electric Boat in order to support the Virginia Class attack submarine program over the years. $9 million were awarded to the company for the upheaval of the Virginia Payload Module (VPM).

“We do expect it will be a larger type of submarine, probably in the size class of the Columbia, but there’s not much more to tell than that. But we’re working with our Navy customer in what that would look like and how we could take that into production,” Rex Geveden said, according to USNI News. “It has the moniker SSN(X) until it gets a class name, and there’s some thought, discussion, and analysis. It would be the follow-on to the Virginia fast-attack submarine, and it would feather in sometime in the late 2030s.”

History of the Virginia class submarines

Purpose of the Virginia class submarines

After the Cold War, the navy of Virginia started preparing for attacking the littorals. Virginia class submarines were so designed in order to prove hefty in underwater battle, however, it would still be capable of performing on the open-ocean ASW. The features, weapons, and new gadgets all complement a shallow water operation. However, some of the performances the Virginia class submarines are capable of are land attack, intelligence gathering, mine reconnaissance, and supporting special forces. Additionally, they are the acoustic equal of Seawolf while adding new non-acoustic stealth features for the survivability to operate in future tactical environments.

Comparison with the Seawolf

There are a few departments where the Seawolf still takes the upper hand such as the maximum speed and weapon capacity. However, the Virginia class submarines have a wider range of military abilities. They have the tendency to deploy covert, non-provocative electronic and acoustic sensors for continuous monitoring of the regional battlespace; including enemy electronic signals, communication links, and the local tactical situation. The acoustic sensor suite is maneuvered with the latest high-frequency sonar, specifically, optimized for hunting diesel-electric and advanced air-independent propulsion (AIP) submarines, mines, and shallow-water hazards to navigation.

The torpedo room has the tendency to store center weapons as well as storage structures and can be removed to accommodate a much larger number of the Special Forces ‘troops’. There are also mating surfaces compatible with either the Advanced Seal Delivery System (ASDS) – essentially a 55-ton mini-submarine – or the more conventional Dry Deck Shelter.

“Specifically, the Navy indicates that the next-generation attack submarine should be faster, stealthier, and able to carry more torpedoes than the Virginia class – similar to the Seawolf class submarine,” CBO’s report said of the projected design as a whole. “CBO therefore assumed that the SSN(X) would be a Seawolf-sized SSN, which displaces about 9,100 tons when submerged, and would have an all-new design in keeping with the Navy’s description of it as a ‘fast, lethal, next-generation attack submarine.’” 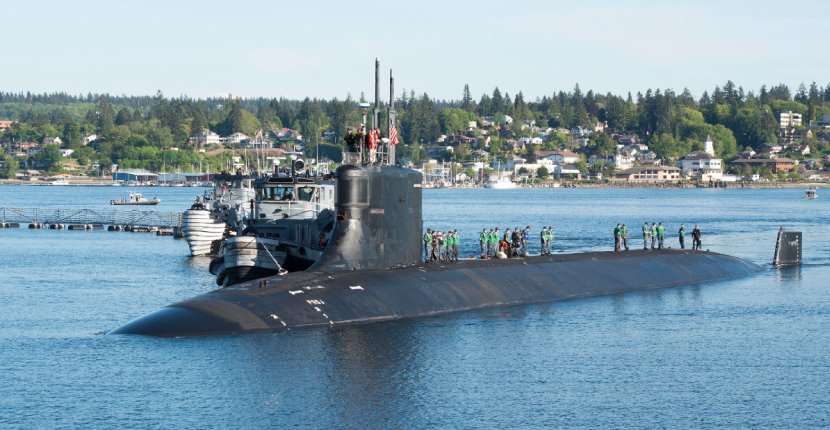 Types and contracts of the Virginia class submarines

The US Navy placed two contracts for the bulk-buy of ten ships. The first five ships were bought on a contract while for the rest of the five, a multi-year contract was placed in January 2004. In December 2008, the navy signed a $14bn contract with General Dynamics and Northrop Grumman for eight additional submarines. In April 2014, another $17.6bn contract was signed for an additional ten submarines, which raised the total volume of the order to 28. For the construction of the two submarines, General Dynamics Electric Boat concludes the deliveries by 2023.

The US Navy put another contract of nine submarines in December 2019, to Newport News and Electric Boat which was worth $22bn. The navy is expected to receive the order over the course of four years between 2025 and 2029. Eight of the nine submarines will come equipped with VPM which will boost the missile strike capacity, while the Block V submarine will have a better length and displacement.

The construction of Missouri (SSN-780) began in December 2004. The keel was laid in September 2008, the submarine was launched in November 2009, and commissioned in July 2010. The keel for California (SSN-781) was laid in May 2010, and the delivery was made in August 2011. General Dynamics Electric Boat delivered the nuclear-powered Virginia class attack submarine Mississippi (SSN-782) to the US Navy in May 2012. However, Minnesota (SSN-783) was launched at Huntington Ingalls Industries (HII) in November 2012, and delivered in June 2013.

In January 2013, General Dynamics Electric Boat received a $2.5bn contract for the construction of South Dakota (SSN-790) and Delaware (SSN-791) submarines. The next two submarines, SSN-792 and SSN-793 were named Vermont and Oregon in September and October 2014, respectively.

Designed and built by the teams at Electric Boat in partnership with the Naval Sea Systems Command, NAVSEA, of the US Navy, the Virginia Class Submarines were optimized with the use of extensive CAD / CAE simulation systems.

The structures of the hulls are designed so as to accommodate standard 19-inch and 24-inch width equipment for ease of installation, repair, and upgrade of the submarine’s systems. There are structurally integrated enclosures inside these hulls that enable these ease of factors.

The noise level of Virginia is equal to that of the US Navy Seawolf, SSN-21, with a lower acoustic signature than the Russian Improved Akula-Class and fourth-generation attack submarines. The new Virginia class submarines are designed with anechoic coatings, a new propulsor, and isolated deck structures that provide a low acoustic signature. The submarine’s steering and diving are controlled with a four-button, two-axis joystick.

The Virginia class submarines are also fitted with modular isolated deck structures. The command centres of the submarines are installed as single units that are cushioned on mounting points. Aside from this, the control deck is also harvested with numerous computer touch screens to make the process of navigation and control easier.

Since the Virginia-class submarines are mainly being designed for the battle with the Soviets, the weaponry systems need to be exceptional. In order to achieve that, the tech teams behind the program are maneuvering them with vertical missile launch tubes and four 533mm torpedo tubes. The vertical launching system can launch 16 Tomahawk submarine-launched cruise missiles (SLCM) in a single salvo. There is a capacity for up to 26 mk48 ADCAP Mod 6, and 21-inch torpedo tubes. Mk60 CAPTOR mines are also being planned to be fitted that would fire sub harpoon anti-ship missiles.

A lock-out/lock-in chamber is also being designed to be placed into the hull for certain operations. The chamber could serve numerous purposes. Some of these could be providing space for a mini-submarine such as Northrop Grumman’s Oceanic and Naval Systems advanced SEAL delivery system (ASDS) to deliver special warfare forces such as navy sea air land (SEAL) teams or marine reconnaissance units for counter-terrorism or localized conflict operations.

The command and control systems module (CCSM) was developed by a team led by Lockheed Martin Naval Electronics & Surveillance Systems – Undersea Systems (NE&SS-US) of Manassas, Virginia, US. It integrates all of the vessel’s systems – sensors, countermeasure technology, navigation, and weapon control, and is based on open system architecture (OSA) with Q-70 color common display consoles.

The main propulsion units are the GE pressure water reactor S9G which has the ability to last as long as the submarine would. The submarine also comes with two turbine engines with one shaft and a United Defense pump-jet propulsor, providing 29.84MW with speeds over 25k dived.

The team of Northrop Grumman designed the AN/WLY-1 acoustic countermeasures system which are fitted in the Virginia class submarines. This system provides the submarines a better range and bearing data. To aid that, there is also a mast-mounted AN/BLQ-10 electronic support measures (ESM) system designed by radar processing, automatic threat warning, and situation assessment. An AN/BLQ-10 provides a handful of functions such as situation assessment, radar processing, and automatic threat warning.

The Virginia class submarines are equipped with two Kollmorgen AN/BVS-1 photonic masts. The rest of the required sensors are placed on the non-hull-penetrating photonic mast include LLTV (low-light TV), thermal imager, and laser rangefinder. The mast is the Universal Modular Mast developed by Kollmorgen and its Italian subsidiary, Calzoni. These submarines do not come with the traditional ceramic hydrophone sensors, instead, they come fitted with the lightweight, wide-aperture array (LWWAA) system based on fiber-optic arrays by Northrop Grumman Electronic Systems. LWWAA is a passive ASW sonar system that is fitted on both sides of the submarines which comprises three large array panels. Lockheed Martin provided acoustic rapid commercial-off-the-shelf insertion (A-RCI) hardware for the sonar system upgrade. The $25.1m contract was awarded in August 2009, and deliveries were made in 2012 and then in January 2011, an $84m contract was awarded to Lockheed Martin for submarine sonar upgrades.

The new Virginia class submarines will also have a Boeing LMRS long-term mine reconnaissance system installed in them. The LMRS will include two 6m autonomous unmanned underwater vehicles and 18m robotic recovery arm and support electronics.

A new hull-mounted acoustic Advanced Flank Array (AFA) designed by Northrop Grumman was delivered for the Virginia class submarine. The investment was more than $3 million for the AFA. The systems were tested in November 2017 and the outcomes of its capabilities were demonstrated.

The latest technology being incorporated in the Virginia class Submarines has by far withheld the requirement of more manpower. If anything, the remarkable designs of the submarines have led to the reduction of 15 men required on it. The teams behind the design of the Virginia class Submarines pointed out that the way to greater efficiency was to develop better systems for automated tasks and the handling of information. The technological advancements do not stop here, as the teams believe, the submarines’ functioning and equipment will only get better in due time with the better tech available.