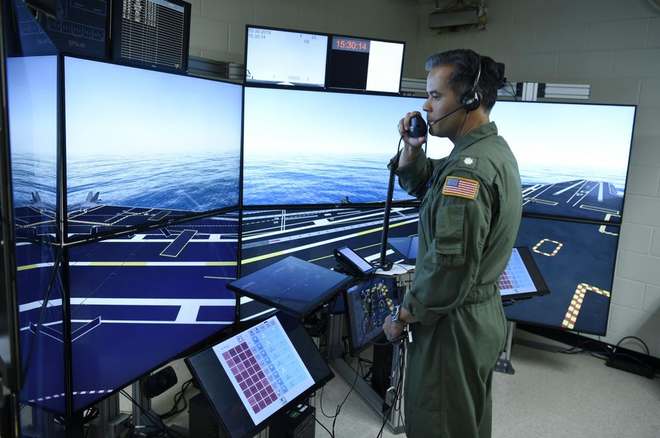 The office of the Naval Research Global (ONR Global) and the US Navy are developing a simulator program to train flight deck crews of an aircraft carrier in a virtual environment. The immersive and expandable 3D technology is based on video games. For the first time, it allows watch stations, supervisors, flight controllers, and catapult crews to train together without the requirement of an actual ship.

One thing is for sure that there is no alternative for experience, but in certain situations simulations are desirable. One example can be the flight deck of a strike carrier with seemingly chaotic and hectic rush of high-tech helicopters and fighter aircraft landing and taking off at all hours of the day and night.

The operations of a full-on flight of an aircraft carrier seem less coordinated when you see a small army of marines, aircrews, and sailors appear to rush about in complete panic as an aircraft worth millions of dollars takes off or lands. It might seem like a bit of luck that the operation goes smoothly, but it is the result of rigorous, intense, and detailed training where everyone knows how to do their job in a perfect manner under the challenging conditions. This kind of finely-honed training sets apart the major naval powers from the second tiers, but such rigorous and coordinated training is as dangerous as actual combat and is extremely expensive.

Grow vegetables right inside your living room with iHarvest…

Take Advantage Of Folders In Google Docs – Everything…

To improve training and cut costs, the ONR Global in collaboration with Naval Air Warfare Center Training Systems Division (NAWCTSD) has successfully created the Flight Deck Crew Refresher Training Expansion Packs (TEPs). These provide deck crews and controllers with the kind of simulators used by pilots for practicing takeoffs and landings on a carrier. There are three TEPs created so far focusing on the Landing Signal Officer (LSO) team, Catapult Launch Team, and the Primary Flight Control Team. These are the personnel who are responsible for launching the aircrafts and recovering them safely. The simulation uses VR headsets, screens, computer-generated characters, ship’s systems, and live players. It also simulates real-life emergency scenarios along with normal operations.

It has been the need for the naval force and is the first example to extend the value of the simulation environment to such a tangible and essential thing as a carrier flight deck.