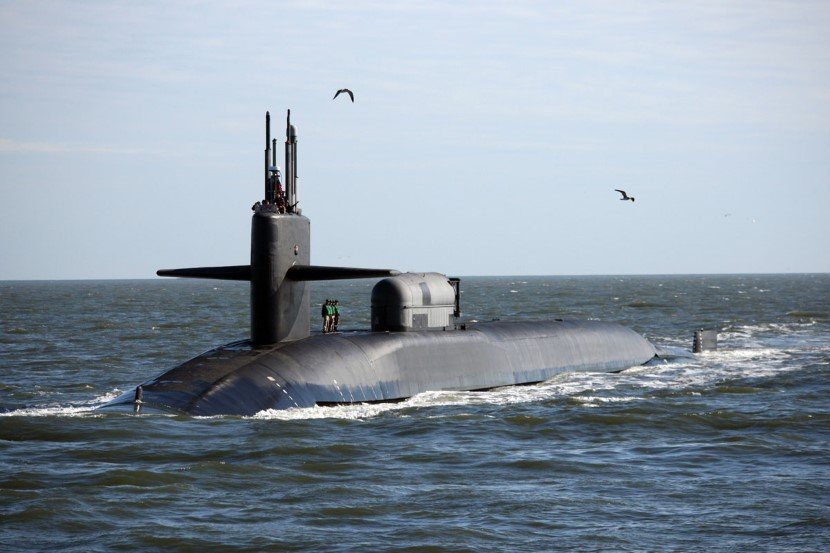 The Ohio-class submarine is a collection of submarines that help serve the US Navy by launching intercontinental missiles. Between 1981 and 1997, 18 Ohio-class submarines were built, each of which was made by the Electric Boat Division of General Dynamics. They help the Navy carry out special missions, and can support the combatant commander’s strike and Special Operation Forces requirements.

All of the submarines are based in Bangor, Washington and the ones that are based at the Atlantic Fleet are in King’s Bat, Georgia. All of them approximately spend 70 days at sea and are then docked for 25 days. In the future, the Ohio-class submarines are to be replaced with Dreadnought SSBNs.

The Strategic Arms Reduction Treaty, signed in 1992, limited the number of strategic missile submarines to 14, 2002 onwards. This means that the US Navy had to inevitably convert them into the conventionally armed nuclear-powered submarines.

The electric boat also received a contract in September, 2002 to convert some of these submarines by fitting 154 Tomahawk TLAM and Tactical Tomahawk missiles to it so they could conduct some special operations for ASDS (Advanced Seal Delivery System).

An all-around wheel system has been adapted by the Northrop Grumman Electronic System to hold higher storage and launch missiles from the 22 missile tubes in the submarine. These submarines also include the Raytheon AN/BYG-1 combat data system.

By November 2007, the USS Ohio had begun its first operational deployment in the Western Pacific Ocean as an SSGN. In January 2003, the USS Florida took part in the Naval Sea Systems Command (NAVSEA). Two Tomahawk missiles were validated through this experiment and the first-ever UUV launch was made. 66 of the navy SEALs can be accommodated in the SSGN.

The ASDS system has been established for the launch of the delivery of US Navy SEALs. Each of the Ohio submarines has had their two forward missiles converted to ASDS with lock-out chambers. ASDS not only has a lot of sonars but also includes GPS and inertial navigation along with communications and electronic support measures. The Los Angeles Class submarines will include the Virginia Class SSNs.

The Ohio-class submarine also includes the Trident strategic ballistic missile that comes from the Lockheed Martin Missiles and Space. Two versions of the trident were launched; the Trident-I (C4) and the Trident-II which had a longer range.

There are new D5LE missiles sent to the Ohio-class submarines which come under the life extension program. Each of them is expected to serve at least until the 2040s.

From the duration of 2000 to 2008, the four Trident-I submarines were also converted. In January 2002, Lockheed Martin received a contract for the production of Trident-II.

The Ohio-class submarine can hold up to 24 Trident missiles in two rows of 12. Each of the Trident-II missiles measures 1360 cm and has a diameter of 210 cm and weigh 59,000 kgs. Alliant Techsystems (ATK) has built the solid-fuel rocket motor.

The US Navy claims that the range of the missile is greater than 7,360 km but can even travel up to 12,000 km depending on its payload. An inertial navigation system is in charge of the missile guidance and is supported by stellar navigation.

The Trident-II can carry 12 multiple independent re-entry vehicles (MIRVs) and yield 100k. The radius of the circle will have an impact from half of the strikes in less than 150m. In order to replace the Tridents, four of the Ohio-class submarines have been converted to SSGN.

Hulls of the Ohio-class submarine

The submarine is equipped with a fish-shaped outer hull that can allow the ship to move swiftly in water. The outer hull, however, cannot withstand high pressure when submerged. Since the hulls are quite large, they are able to make space for a lot more weapons of large size and great range.

Purpose of the Ohio-class submarine

These submarines were developed to carry out patrols and have been specifically engineered to do the job. They include logistical hatches that can be used for resupplying and repair openings. Sailors can easily transfer goods and resources between themselves and even carry out easy replacement and maintenance. This reduces the efforts and saves the sailors quite a lot of time. For one SSBN employment cycle, a 70-day patrol has been implemented and a 25 day transfer period has been set for deployment, maintenance, reloading of munitions etc.

There are four 533 mm torpedo tubes fitted into the Ohio-class submarine, each of which has an mk118 fire control system. The mk48 has been used in the US Navy since 1972 and has a warhead that weighs 290 kgs. Not only can it be operated without any wire guidance but also comes equipped with active and passive acoustic homing. It can fire up to 50 km at a speed of 40k.

There is a WLR-8 (V) surveillance receiver included with the Electronic warfare equipment. It has been taken from GTW of Massachusetts. It also comes equipped with eight launchers for the mk2 torpedo decoy. It uses seven YIG-tuned and vector-tunes superheterodyne receivers, all of which operate in the J-band up to 50 MHz.

Sensors that are part of the Ohio-class submarine

There is one radar used for surface search, navigation, and fire control called the BPS 15A I/J-band radar. As part of the sonar, the suite is the IMB BQQ 6 passive search sonar Raytheon.

Propulsion of the Ohio-class submarine

A pressure water reactor, GE PWR S8G, provides 60,000 hp in a single shaft. Through this propulsion, a speed of 18k can be provided in excess when on the surface and 25k when it is submerged. The submarines are priced at $50,000 which is their unit operating cost and have been deployed since November 11, 1981.

iPad Is Disabled Connect To Itunes: How To Fix It?