Researchers Have Cracked A Way To Photograph People Behind The Walls

We take so many things for granted. I mean, have we ever truly appreciated Wi-Fi signals reaching our rooms despite the presence of obstacles such as walls and doors? No, right? Because apparently, it’s just supposed to work that way. Well, it’s about time we start lauding it because thanks to this Wi-Fi connection, scientists have found a way to photograph people through walls!

German scientists have exploited this property to the extent that they can now take holograms, or 3D images of things inside a room without actually being inside. Creepy, yet so cool!

Philipp Holl, the 23-year-old undergraduate physics student at the Technical University of Munich, told Business Insider that, ‘He can basically scan a room with someone’s Wi-Fi transmission.’ He had initially built the device as part of his bachelor thesis with the help of his supervisor, Freidemann Reinhard. However, this soon evolved into something much greater as the two submitted their research article on this technique to the journal ‘Physical Review Letters’  .

According to Mr. Holl, the technology isn’t completely ready yet because they’re facing issues of low resolution. Hence it’s in the prototype stage but Holl seems quite optimistic, and is ready to give his 110% to make this technology a success! He says that, ‘If there’s a cup of coffee on a table, you may see something is there, but you couldn’t see the shape. But you could make out the shape of a person, or a dog on a couch. Really any object that’s more than 4 centimeters in size.’

Even though the ability to see through walls via Wi-Fi has been there for quite some time now, Holl says that nobody has ever used Wi-Fi to make a 3D hologram of an entire room containing stuff! He added that, ‘Our method gives you much better images, since we record much more signals. We scan the whole plane of a room.’

So, let’s draw a comparison between Holl’s method and the conventional method:

Holl uses two antennas. One is fixed in place while the other moves. The purpose of the fixed antenna is to record a Wi-Fi field’s background while the other antenna’s purpose is to record the same Wi-Fi field from other points in the room. Holl said that, ‘These antennas don’t need to be big. They can be very small, like the ones in a smartphone.’ 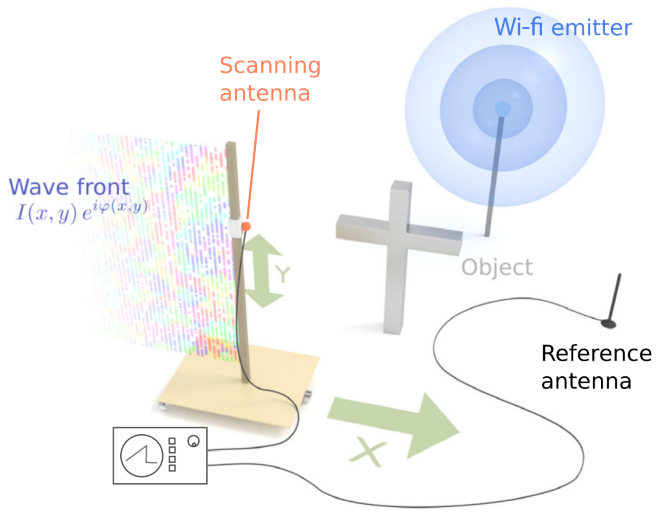 Moreover, the antennas not only record the intensity of the Wi-Fi signal but also detect and identify its phase i.e. a light’s property because of its wave nature.

Lastly, the signals from the two antennas are sent to a computer, where the software teases out the differences in intensity and phase ‘more or less in real-time’ (as per Holl). The software makes the magic happen as it builds multiple 2D images which are then stacked together to make a 3D hologram! And since Wi-Fi signals can penetrate walls, these holograms are of things inside a room.

So, what’s the scope of this technique? Well, according to Holl, the scope is quite expansive. One can not only lend it to rescue workers who can identify people in rubble caused by an earthquake but can also assist spy agencies to see if somebody’s inside a house. Holl highlighted the unreal power of this technology by saying, ‘You could probably use a drone to map out the inside of an entire building in 20 to 30 seconds.’

All in all, it sounds very promising yet scary!