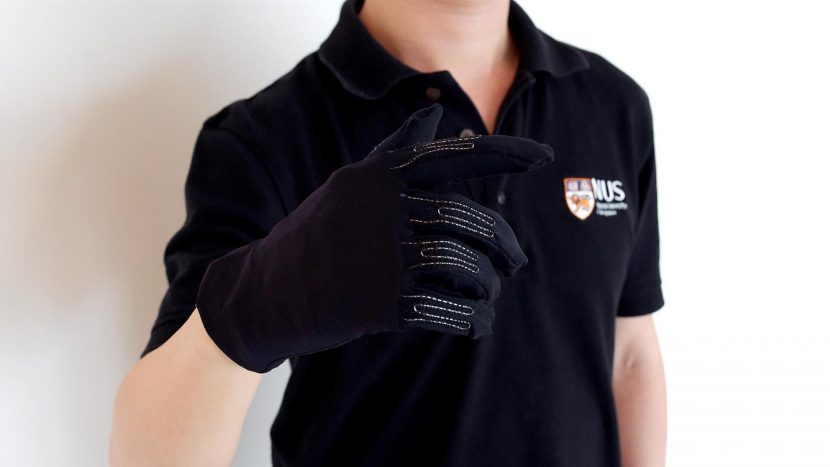 Gaming technology keeps evolving to give gamers the most immersive and life-like experiences. Virtual Reality is a big step in really getting into your video game. Perhaps, the only thing that would make it even better would be using your hands exactly like you would if you were inside the game. Researchers at the National University of Singapore have developed the prototype of the smart gaming glove after two years of experimentation. The smart gaming glove is called the “Infinity Glove”, inspired by Thanos’s weapon of mass extinction, the Infinity Gauntlet in the Marvel Universe. Way to feel the power in your hands as you control everything.

The Innovation in the Technology

Gaming gloves are not an entirely new invention. However, the ones tested out before never made it to mainstream markets because of the lack of practicality. The new Infinity Glove, developed by a team of researchers led by Professor Lim Chwee Teck and co-led by Dr. Yeo Joo Chuan and Dr. Yu Longteng, tackles all the issues faced by its preceding counterparts.

This glove is much more lightweight and flexible, thanks to ultra-thin, highly sensitive microfiber sensors weaved within the material of the glove. The older smart glove controllers have been usually bulky and rigid as they rely on conventional sensors. It also made them lose flexibility. As put by Professor Teck, the current commercially available gloves were not responsive and also caused a strain on the user’s hands after prolonged owing to their bulky setup. The free-movement allowed by the Infinity Glove makes it easier to mimic a variety of in-game controls using simple hand gestures. Gamers can flex their index finger to fire the weapon and rotate their wrist clockwise to move forward.

The Infinity Glove comprises of five thread-like sensors, one placed inside each finger’s material. This makes up a network of sensors that can interface with the game software.  It produces an accurate three-dimensional position of the user’s moving hand. This works a lot like any other gaming controller. The gestures made by the user’s hands just mapped to specific inputs that are found on a regular controller. So far, a total of 11 inputs and commands have been mapped by the researchers which will allow users to play games such as Battlefield V.

Previously, in 2017, the same researchers at the National University of Singapore developed this ultrathin, flexible rubber-like microfiber sensor that can be worn on or placed next to the skin. The design comprises of a liquid metallic alloy to be used as a sensing element, encapsulated within a soft and flexible silicone microtube, which has the same thickness as that of a strand of human hair. This element is highly sensitive to mechanical deformation. The sensors were made to be so thin and flexible so that they could easily be woven into bandages to monitor the pressure. The sensors are accurate and fulfil the role of wires, thereby reducing any need for additional wires. When they are placed on the skin, they can sense and relay information about the pulsatile movement of blood vessels. The electrical reading signal changes when the fibers are bent and as the liquid metal is displaced.

The application of this microfiber sensor technology paved the way for this innovation in the regular smart glove. The current prototype of Infinity Glove weighs just 40 grams, and since there is a chance of sweaty hands during its use, the sensors are well-sealed within, making it even machine-washable. However, it doesn’t stop just at that, it can map finger gestures for human-machine interaction much more accurately, too. Initially, the technology aimed to measure pulse and bandage pressure, but it was adapted for the smart glove by improving the strain sensing capabilities.

When linked up to the team’s proprietary software, the sensors in the glove can rapidly translate the gestures via electrical signals into command inputs. The response time? Almost the same as pressing a button on the keyboard. The Infinity Glove can also be wirelessly connected to a computer. The glove’s usage was showcased by the team in Battlefield V and a custom-made map in the Unity game engine. Check it out in action here:

Is it safe to use?

Sceptics might be still stuck on the whole “liquid metal alloys in the fibers” bit. What if the microtubes crack and the liquid leaks out? Will it be hazardous? Professor Lim responds to that confirming the two metals that make up the conductive material have been used medically without consequence for many years. One of them is even used in dental fillings.

The current iteration of the Infinity Glove is powered by a lithium-ion battery with an eight-hour lifespan.  It can be connected to the gaming console via Bluetooth like many other wireless controllers on the market. It is likely that other connectivity options like Wi-Fi might also be added in the future or by the time is completely commercialized. The control buttons in the typical controllers are incorporated into the glove as assigned to a different finger. Different gestures can also give additional control using a work-in-progress interface. For example, the users can curl in their index finger, mimicking pulling a trigger to fire the gun in-game. The glove is easily customizable, so users could easily modify the gesture inputs, such as reloading a weapon just by a flick of the pinky finger. Dr. Yeo notes that the glove is not subject to restrictions present in other motion-based “controllers” like the Xbox Kinect or Nintendo Wii – it does not require line of sight via a camera or visual sensor to record inputs. This makes it easier to use the glove sitting or even laying down.

When will it hit the gaming world?

The research team intends to mass-produce the Infinity Glove, although they have yet to arrive at a confirm estimate for both its release and the cost. A rough figure could be between $200 and $300 apiece, Professor Lim estimated. However, the glove’s immense potential in E-sports and E-Gaming markets has led the team to decide on creating two variants – one for the casuals, and a more sensitive version for more hardcore gamers. The gloves will be marketed individually, with left and right-handed versions depending on user preference.

More applications beyond the gaming industry

There are other applications for the Infinity Glove as intended by the team that goes beyond gaming. This includes hand rehabilitation for patients as the glove offers promising aid for hand rehabilitation. Not only would it allow patients to continue exercises through immersive play, but also medical professionals can track the progress of their patient’s joint movements in real-time.

The NUS team also plans on extending the glove’s capabilities into the world of virtual reality, complex games and robotic control. For now, the smart glove is being commercialized by an NUS start-up, Microtube Technologies, co-founded by Prof Lim and his team members, Dr. Yeo Joo Chuan and Dr. Yu Longteng.