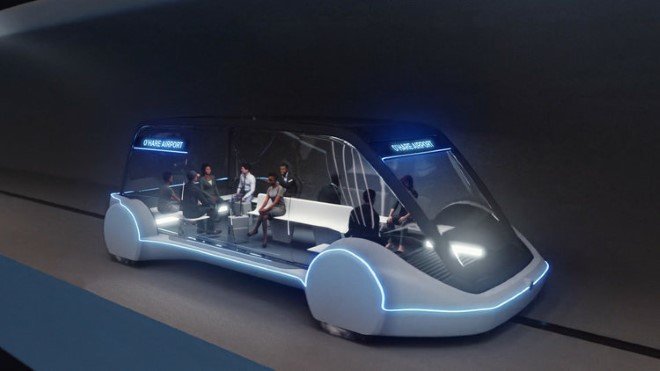 Future passengers that land at the O’Hare International Airport will probably breathe a sigh of relief every time they have to travel from the airport to downtown Chicago without facing the suffocating traffic jams. This is because of an underground express transportation system that will come to life in the near future, thanks to Elon Musk’s Boring Company. Keep on reading to curb your curiosity!

Boring Company was one of the four bidders competing to get the project. The Chicago Infrastructure Trust, filling in for the City of Chicago eventually chose Elon Musk’s company to design, construct and pay for and even look after the Express loop. Their proposal consisted of transporting passengers to/from Downtown Chicago to Terminals 1-3 of O’ Hare Airport. Each pod in the transit loop will carry 16 passengers and transport them to the drop-off location within 12 minutes. This might be a huge deal for the airport, where nearly 80 million people visited in 2017.

Called skates, the electrical modules will move on underground rails at a top speed of 150 mph. According to boring company, the transit system will carry passengers at a rate that is three to four times faster than existing systems. Although this may sound like a normal subway system, however, this electric loop is set out to be completely autonomous!

Another good thing about the project is that the construction noises will be minimum and barely audible to the people on the surface. Even during operation, the on-ground public would not be able to hear a thing. Once in operation, the system will run 20 hours a day and seven days a week. The expected frequency for the departure of pods is estimated to be around 30 seconds.

Built on a revised Tesla Model X chassis, the skate will be centrally air conditioned and equipped with a Wi-Fi. Furthermore, the proposal also contained a pod that will be able to carry not only the people, but also their luggage. The estimated cost for each ride will probably be $20 to $25. This is drastically lower than other taxi services, which normally cost $40 and takes up a lot of time!

Gibraltar’s former military base is now a magnificent…

The transit system is yet to be tested and Boring Company is still new to high-speed transportation. However, they have already made a kick start to the project by gaining approvals to dig in Washington, DC, and in Los Angeles. Furthermore, the project will be privately funded if the company and city reach a unanimous decision. Musk’s company will exclusively negotiate with the city for the next 12 months.

Let’s hope we get to see this project come to life soon!