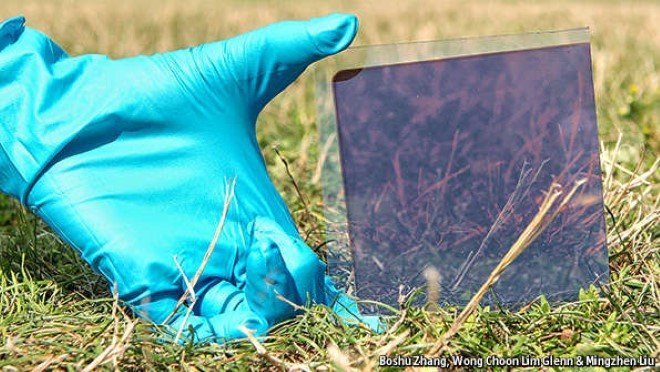 Global warming is real – don’t listen to Trump. At the current accelerating pace of development, we’re likely to run out of natural resources such as coal, oil and natural gas. Moreover, the burden on these natural resources isn’t the only thing we need to pay attention to. Our global temperatures are rising and glaciers are melting due to which the overall climate has started to change abnormally. In order to mitigate and rectify this climate change and lessen the dependence on coal, oil and natural gas, we need to work on renewable energy. Fortunately, many people around the globe have taken this issue seriously and have begun working on technologies that harness solar, wind, tidal and geothermal power to provide electricity.

Solar panels have made it to the ‘favourites’ chart, and modifications are being made every now and then to make them even more efficient and convenient. The chief technology officer of Oxford Photovoltaics, Chris Case, has been working on flexible solar strips. He recently examined the small yet heavy vials filled with canary-yellow liquid and affirmed its ability to generate a kilowatt of power. The material inside the vial is basically methylammonium lead iodide, which comes under the category of perovskites that can drastically increase the power we generate from the Sun.

If there’s one company that blindly believes in perovskites, it’s Oxford Photovoltaics. Perovskites have a crystal structure and often act as semiconductors which enables them to be used as solar cells. Dating back to 2009, perovskites could convert 20% of the solar energy into power and this coincides with the performance of commercial silicon cells. However, scientists have full confidence in these cells and are determined to push it up to 25% in the coming years.

What makes perovskites better than silicon is that they are cheaper to turn into cells. Let’s compare the two: to create a silicon cell, you need to slice a 200-micron-thick wafer from a solid block whereas a perovskite cell can be easily made by mixing certain chemical solutions and pouring the resulting mixture onto a backing or by vaporising precursor molecules and then letting them condense onto the backing. If this technology pulls through, then silicon solar cells might become history!

So, the general working principle of these solar cells (including perovskites) is pretty much the same. As the light hits the crystals, the negatively charged electrons are no longer confined to their respective positions. As they leave, positively charged holes in the crystal lattice remain and hence become semiconductors. The adjacent materials then capture both the positive and negative charges, transporting them to electrode layers present on the outer surface of the cells where they ultimately generate current.

Variations in these cells are possible but the one that has gained the attention of many researchers is that of the tandem cells. These cells have a layer of silicon as well as perovskite, allowing them to convert a broader range of spectrum into electricity. Similarly, perovskites can be made through different combination of atoms, thus being able to absorb different parts of the light spectrum. Perovskites strongly absorb the blue end of the spectrum while silicon absorbs the red part.

The tandem cells were first revealed by researchers from Stanford University and the Massachusetts Institute of Technology. The measured efficiency turned out be 13.7% but Oxford Photovoltaics beat that record by an additional 6.3% efficiency. They aim to commercialise all-perovskite tandems that have cells of varying composition in order to harness energy from different regions of the solar spectrum.

However, the only drawback of perovskites is that they dissolve in water due to which perovskite solar panels need to be watertight. They are currently working on this, and hopefully they’ll work it out because the ultimate dream is to feed the grid itself with power generated from these perovskite cells. Oxford Photovoltaics wish to glaze every building with panes consisting of semi-transparent perovskite cells that will eliminate the building’s dependence on the national grid.  Silicon cells have contributed little over 1% to the overall electricity generation but perovskite cells seem promising. Let’s hope for the best!

Would You Dare to Step Inside this Glass Box Suspended 4000m High in the French Alps?

Most spoken languages in the world and interesting linguistic statistics