Caltech’s newest robot Leonardo can walk, jump and even hover 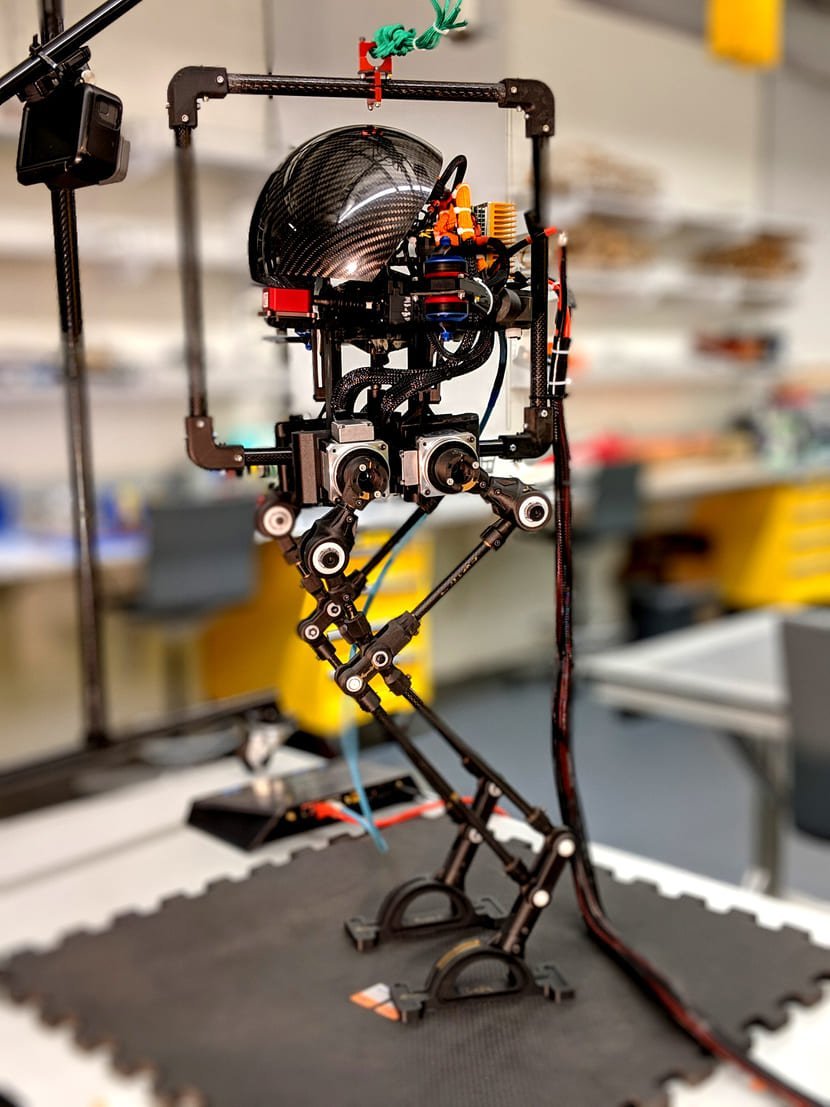 You can either fly like a bird, jump like a kangaroo or walk like a human, but you can’t do it all at once. Well, Leonardo can. Where traditionally robots are either landlubbers or airborne, Caltex has turned to nature as inspiration to create the first ever flying-jumping-walking robot.

Leonardo, short for LEg ON Aerial Robotic DrOne, is similar to other bipedal robots apart from the fact that it can fly too – or at best try. Standing two and a half feet high (around 0.8m), and weighing six pounds or 2kg, it has a carbon fiber structure, which makes it light in weight and also provide balance, and strength. Leo has chicken like gait, with a body set on two skinny legs.

When it comes to Leo, Caltech promises more stability when tackling tough terrain, with its thrusters overcoming usual problems that bipedal robots face. As an alternative of wobbling to balance, it can transfer to its thrusters to convert into a drone with legs. The pair of thrusters on the sides are sturdy enough to let it hover. This will not give it maneuverability like a drone, neither the precisions, but that is not Caltech’s goal anyway. In its place, Leo’s thrusters are intended to give it additional air-time after a hurdle, letting it jump over obstacles and land securely on the other side. And more interestingly, Leo can glide up a hill instead of climbing.

Co-created by Morteza Gharib, Caltech continues to experiment with Leonardo on a rein. Alireza Ramezani, the lead researcher on the project, commented that the aim is not a quadcopter, but a machine that has legs and thrusters and has the leverage of both to improve its ability to jump. Adding to this, he said that the thrusters make Leo almost fault tolerant, offering a backup in case it wobbles or has other difficulties when overcoming a hurdle. Leo can switch between the legs and the thrusters depending upon the situation and what is more useful at that moment.

video by aerospace robotics and control at caltech

This vintage plymouth Caravelle installation serves as a…

In robotics, merging flight and walking is no easy feat. Roboticists have been at work in the direction of understanding bipedal movement for years, and those machines still don’t equably walk among the general population. One challenge, something that humans are prone to as well but have a natural system to correct, is that it takes a lot of strength even to get a two-legged robot to steady in one place, even when it’s upright and still, a bipedal robot has to make modifications to stay upright continuously.

Another trial that comes up when talking about bipedal locomotion is that the integral unsteadiness of mobilizing on two legs means robots have a hard time on rough terrain. One wrong step, or a minor move in the surface underneath its feet, and the machine crashes to the ground. Since bipedal robots aren’t capable of being able to pick themselves up again, this is a huge problem. Leo, however, would hover over tough terrain, making slipups less probable to be disastrous. If things get extremely ugly, for example, if it requires getting up a hill, it may be able to glide rather than scrambling.

All this talk brings us to Mars, well hopefully soon. Collaborating with NASA, Caltech has been working on a helicopter for the Red Planet, which could overcome and cover tough terrain and scurry around more swiftly than a maneuvered rover. Though compared to a drone, a rover can park itself on the surface short of using up its batteries, while a drone has to power up to hover. Gharib and his team are discovering how a robot, like Leo, could be able to circumnavigate the rugged Martian scenery more proficiently than an old helicopter by placing its feet on the surface and powering up the thrusters slightly.

Caltech is also working on how Leo could be made of use here on Earth as a kind of robot buddy to an airborne ambulance, a small-scale variety of which Caltech is experimenting against, which could transport an individual out of an otherwise unreachable zone.

To make it a little distinct, Leonardo isn’t destined to be the sole bipedal contraption in an ecosphere that will momentarily be swarming with robots. Similar to the traditional humanoid bots like Atlas, Leo will too have its use cases. One wouldn’t desire a bot like Leo to be buzzing everywhere in their home, in the end. Nonetheless, this new sort of humanoid robots could very well find a foothold on Earth and may be out of here.