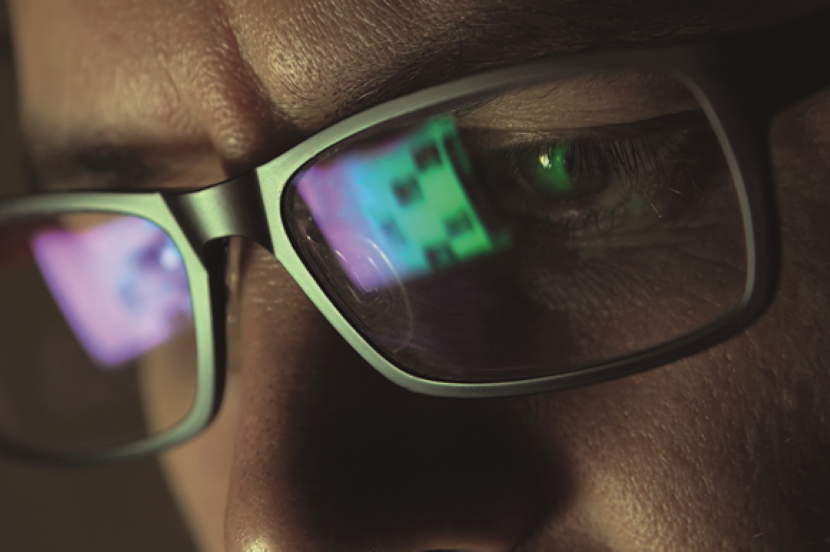 While browsing through your social media, you see a sponsored ad for “Blue Light Blocking Glasses” that claims to “protect your eyes from the harmful light coming from your computer / mobile screen”. Wondering what this blue light really is and why do you need to keep yourself protected from it? Keep on reading.

What is blue light anyway?

Light is not what we see; there is only a certain wavelength range that the human eye can perceive. Out of this range are the Gamma rays, X-rays, UV rays, Infra Red rays and multiple other types of radiations – not visible to the human eye. Blue light falls under the visible light spectrum and includes wavelengths ranging from 380nm to 500nm. It exists everywhere and is released naturally from the sun and the moon. However, LED, florescent lights and technological gadgets like mobile phones and computer screens etc. all release blue light in significant amounts, when measured alongside our usage of these devices.

The connection between blue light and human body

Since we know blue light can be seen from the naked eye, it is well apparent that the human eye cannot block it. All the blue light reaching our eyes enter them and reaches the retina, the third eye layer. This is so because the amount of natural blue light, excluding the artificial rays, we get is essential for a healthy brain and body. It is blue light that regulates our circadian or biological cycle, helping our bodies to fine tune the tasks that follow a daily routine, such as sleeping patterns. It also helps to boost mood, attention, reaction times, alertness and also to develop better memory and cognitive functioning. Certain psychological therapies also use blue light.

While the blue light is beneficial during the day time which essentially comes from the sun, its exposure during the night time through our screens which is more brighter, shorter-wavelength (more bluish) light, can have detrimental effects as it can disrupt our natural sleep patterns. Cathy Goldstein, an assistant professor of neurology at the University of Michigan Sleep Disorders Centre says, ‘‘Our bodies associate blue light with daytime, so being exposed to it when you’re trying to go to bed pushes our internal clock later so that it’s harder to fall asleep and harder to wake up in the morning’’.

On average, 80 % of American adults are spending two or more hours on a digital device a day with 67% using two or more devices at the same time, according to The Vision Council. A survey conducted not-so-long-ago by contact lens provider Acuvue found that the average office worker spends approximately 1,700 hours a year or 6.5 hours a day in front of a screen.

This prolonged exposure to blue light, however, can be very harmful in this modern era, as we’re constantly surrounded by immense levels of light pollution. Excessive exposure may lead to dry eyes, cataract, hormonal imbalances (e.g. of melatonin and cortisol), AMD (Age-related Macular Degeneration) and/or changes in brain functions. It is also a very common reason behind eye-strains, that most of us experience after extended exposures to digital screens. Stronger, long-term effects aren’t well known. Harmful effects of the short-wavelength of blue light (450nm to 455nm) outweigh those of the longer wavelength of the blue light rays, as these wavelengths scatter more easily.

Researchers agree that blue light from LED devices like the televisions, smartphones, tablets or laptops reduces the body’s production of sleep-inducing melatonin which affects the quality of sleep at night.

According to American Optometric Association, digital eye strain is “a group of eye and vision related problems that result from prolonged computer, tablet, e-reader and cell phone use.” Those issues range from blurry vision and dry eyes, to headaches and neck pain.

However, a research compiled by the AOA (American Optometric Association) indicates that exposure to blue light for extended duration such as using your smartphone or computer all day might cause damage to your retina which is the innermost layer of your eye that is responsible for sending signals to your brain to process what you are seeing.

What are Blue Light Glasses?

Blue light blocking glasses may look like ordinary prescription glasses at first but they use special lens filters having the ability to block or absorb the transmission of blue light and in some cases UV light. This means, less exposure to blue light wavelengths while you are working on your computer or other mobile devices which helps to reduce digital eye strain.

Use of blue light blocking glasses is on the rise

Greenskeeper turns his ordinary lawn into an intricate piece…

Crop One is going to establish the world’s largest…

According to Vision Council, which is the representative body of eyewear manufacturers and suppliers in the United States, about 60 percent of the Americans experience digital eyestrain in some form due to excessive usage of digital screens and as a cure, people are turning towards blue light blocking glasses and screens which has lead towards the emergence of blue light filtering eyewear industry in the last few years.

The number of people going after the blue light blocking special eyewear is gradually on the rise. The global market value for blue light glasses will increase from $18 million in 2019 to $27 million by 2024, as suggested by a market research company, Market Study Report. The benefits of blue light blocking glasses that are advertised and marketed by the different companies include improved sleep patterns, reduced eyestrain and headaches to name a few.

Contrasting opinions on the effectiveness of blue light blocking glasses

The important question here to ask is, do blue light blocking glasses actually work? Well, the answer is not a straightforward yes or no. It depends on whom you are asking.

Since the blue light glasses are not marketed as medical devices therefore the FDA doesn’t regulate the eyewear. And because of this, there’s not a lot of research available to support or oppose the effectiveness of blue light glasses.

But some eye professionals believe that blue light glasses do have benefits.

Another argument in favor of blue light glasses is that they help you sleep better at night.

Don’t want to put on special eyewear but still want to save yourself from the hazards of blue light-emitting screens? Well, the easier or not-so-easier solution would be; give your eyes a break.

The best method to protect yourself from the potential harms would be to limit your exposure to the blue light rays by limiting screen time.

All the vision related organizations including the American Academy of Ophthalmology and the Vision Council urge balance in screen usage.

They also recommend adopting the 20/20/20 rule which means: ‘’Every 20 minutes look at an object at least 20 feet away for 20 seconds. This allows the eyes to get back to normal.’’

Portable Scanner by CZUR is quite afforable and smart