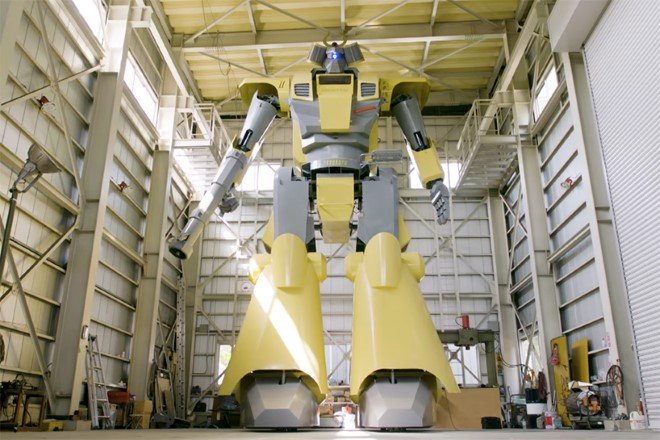 If you watch anime, you might know of the incredibly fascinating series ‘Mobile Suit Gundam’, and if you have seen it, you definitely would know of RX-78-2 Gundam manned robot! Now, if you are a fan – you’re in for some good news.

A Japanese engineer, Masaaki Naqumo, just created the world’s largest robot which is inspired by none other than the fictional RX-78-2 Gundam (which itself is based on Robert Heinlein’s 1959 novel ‘Starship Troopers’. Masaaki’s version LW-Monofu is 28 feet tall and has two legs that apparently weigh more than an elephant. In order to make it move around, Nagumo simply sits in the cockpit and controls its movements. It took Mr. Nagumo six years to create this giant robot, which is meant to serve Sakakibara Kikai with developing farming equipment.

This isn’t the company’s only product; it is also known to produce ‘amusement machines’ that people can basically use for fun. For instance, there is a 11 feet tall Landwalker and a MechBoxer boxing machine that people get on rent for $900 per hour – a great way to earn, isn’t it? While everything about the robot is spot on, the only con is that you need to disassemble it in order to take it out of the factory; after all, it is 28 feet tall!

Nikola has announced a Hybrid Pickup Truck Equipped with a…

In an interview, Nagumo said, “I was drawn to things that get you around without having to use your own strength. So, I create machines because of their ability to move on their own.” According to a report by Reuters, Nagumo’s mighty creation can move its fingers, turn its upper body and walk back and forth at a speed of 0.6 miles per hour. Nagumo further added, “The reason why I made this [robot] is so everyone can enjoy it, and I think this is one small step closer to my childhood dream.” The six year long journey wasn’t easy as he explained, “It’s [easy to get] burned—it’s heavy, and dirty. There is nothing to enjoy.” He concluded by saying, “I believe that someday we will create things that people are imagining today. So, if there are are kids like me who get inspired when they see robots they want to create and ride, it would lead to more innovative robots. [The robots] I used to watch in the anime moved faster and were stronger than humans. So, this is the reason [Mononofu] can’t be my greatest robot yet.”

Clearly Mr. Nagumo is not yet done!