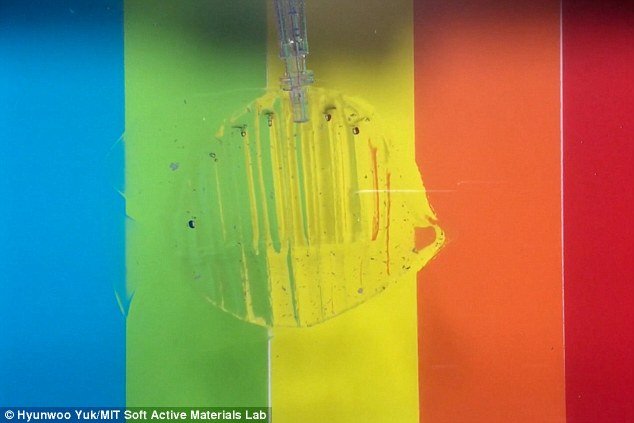 Massachusetts Institute of Technology (MIT) is known for its astonishing inventions in the field of science and technology. Keeping up with this trend, engineers at MIT have contributed with yet another amazing invention to their assemblage of Weird Little Soft Robots. The swimming robot made of jelly-like material called hydrogel — a polymer gel which consists of more than 90 percent of water by weight, has the capability to capture live fish within its tentacles. This video demonstrates the partly US office of Naval research’s funded swimming robot pouncing on a live goldfish and trapping it in its tentacles. Fortunately enough, the then captured fist was released unharmed.

Lead MIT engineer of the Robotic Claw, Dr. Xuanhe Zhao said, ‘[The robot] is almost transparent, very hard to see’. The idea behind the robotic claw is inspired by the glass eel larvae which are approximately indiscernible but still strong enough to swim through long distances. Sound and light waves pass through it just like they pass though water, thus making it almost untraceable underwater as per a research paper published in Nature Communications.  The robot can be used to capture and release live animals. As per Dr. Xuanhe, ‘When you release the fish, it’s quite happy because [the robot] is soft and doesn’t damage the fish. Imagine a firm robotic hand would probably squash the fish.’ Soft Robots are usually made of silicones, but they are easily traceable. On the other hand, hydrogel is too insubstantial to speed up under the influence of any sort of force without falling apart. So, MIT engineers formulated chemicals in a special way that, when treated with UV light, render much stronger but plastic like flexible hydrogel claw.

The robots appear to be completely transparent as illustrated

The propulsion mechanism to jet the water is mimicked by squid’s. Instead of usage of muscle, syringe pumps are utilized to pump water into its hollow structure. As syringe pumps up the preprogrammed volume of water into little robotic channels at regular intervals, it enables the claw to move its limbs swiftly and to generate the force of few newton thus allowing it to gently grab, kick or swim through water. The efficiency of its movement can be assessed by that fact that, it takes few seconds for the robotic claw to move as much as older versions did in 20 hours.

The hydrogel robots are beneficial to interact with squelchy living organisms without hurting them. Furthermore, the hydrogel is soft and unreactive with its surroundings. Keeping this in mind, this amazing invention can find its application into medical field also. The hydrogel device can be used in operating human-body organs in a way to avert them from getting further damaged by the surrounding infected tissues during surgical treatments.

According to Dr. Zhao, ‘Hydrogels are soft, wet, biocompatible, and can form more friendly interfaces with human organs,’ he further added that, ‘We are actively collaborating with medical groups to translate this system into soft manipulators such as hydrogel ‘hands,’ which could potentially apply more gentle manipulations to tissues and organs in surgical operations.’