Most of us have established that life is unfair – there are people who have 7 course meals while many struggle to get something as basic as a loaf of bread. Then, there are people who are swimming great miles while handicapped people who dream of swimming sit on the side and watch. These factors are beyond our control, but technological advancements have made it possible for us to find alternatives.

I remember me and my friends going crazy when the hoverboards came into the market. We all took turns, and felt empowered as we had full control of the device. In that very shop, sat a 16-year-old boy in a wheelchair who looked at us while we giggled and made videos of each other on the hoverboard. I turned towards him, and the desire on his face almost felt tangible. Everything came to a halt, and in that very moment I prayed to God that somewhere someone would make something of the same sort for all those were dependent on wheelchairs to move about.

I think my prayers have been heard!

Kevin Halsall, a New Zealand-based inventor, has come up with ‘Ogo’ which is basically a hoverboard for the handicapped! Even though the concept of an autonomous wheelchair isn’t a new one, the ability to control the direction of the movement through the application of pressure in certain directions is definitely new! Ogo is a unique hands-free wheelchair that stands upright on just two wheels. It is sort of like a Segway – it has an array of different sensors that read and translate the rider’s motion into directional movement. For instance, if you lean forward, then the internal motion sensors instantly recognize the action and relay it to the wheelchair’s motor which then causes the wheelchair to move in the forward direction. 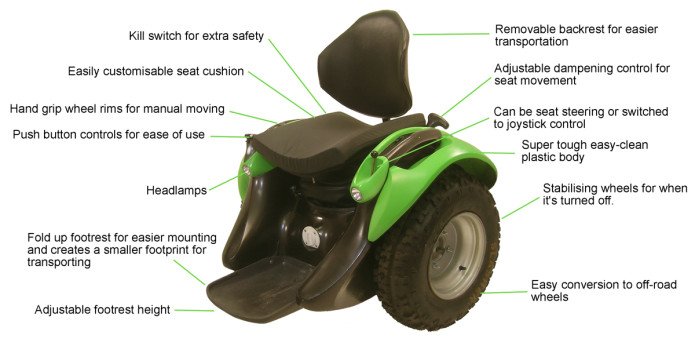 You can control all your smart home appliances through…

So, how did Halsall succeed in making this prototype? He actually bought a new Segway for $9,140 and then tore it apart only to modify it in order to increase its suitability for the seated user. The conventional Segway comes with handlebars to turn so Halsall innovated and removed the dependency on handlebars by rebuilding the control system. Hence, he succeeded in allowing the user to initiate turns simply by leaning in any direction.

Proud of his creation, Halsall shared a video with the world in which he is executing extremely precise turns and passing through narrow alleys on his Orgo with utmost ease. He assured people that the Orgo is capable of moving on rough terrain thanks to the wide tires.

Even though it is still a prototype, Ogo has surpassed all expectations – the fact that it has made it to the final round of the Innovate Awards in New Zealand is a proof of that.  So hopefully we will see this in real soon!