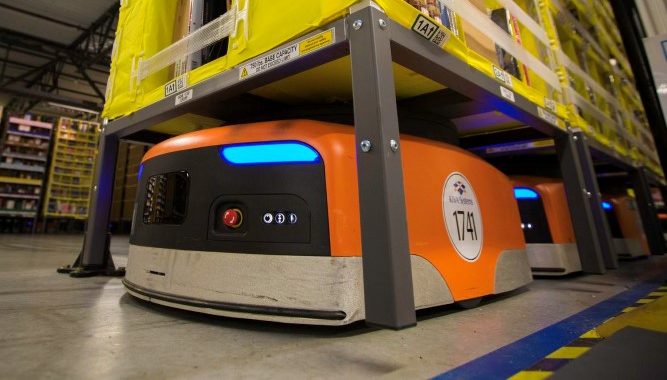 Who would have thought that Amazon’s busiest employee would be a robot? Yeah, you read that right! Amazon has significantly increased its sales by enhancing its efficiency at its warehouses. It would take days (okay, that’s a little exaggerated) for the human employees there to go through all the shelves, find specific products and set them out for boxing and shipping. However, using these new sleek Kiva robots, it only takes fifteen minutes now!

Most of you might be morose by the fact that robots are slowly replacing humans, and that in a decade or two, robots will take up half of the human jobs! But cheer up for now because Amazon says that it didn’t downsize at all, but actually hired more people. There are technical engineers in every warehouse to fix the robots at all times. Moreover, Kiva robots have only made the lives of the employees much easier, as they all line up at an employee’s station. From there, all the employee has to do is identify the product and fetch it from the shelf. All this information regarding the product and its location is displayed on the computer screen placed above a conveyor belt. The product is thrown into a yellow bin which is then carried away by the conveyor belt to be packed and shipped.

So, you may be wondering ‘how do these robots not bump into each other’? Well, these Kiva robots are one of a kind. They actually talk to each other using signals. This technology makes the Kiva robots the most advanced robotics systems in today’s world, and this has been acknowledged by Mr. Goldberg, UC Berkeley’s robotics professor.

Worst Passwords of 2018 show that we have learnt nothing…

There are currently 45,000 Kiva robots present in Amazon’s fulfilment centres globally, and these robots are constantly being improved – for instance, the latest Kiva robot can move 50 percent more inventory out of the centre than its predecessor could. The use of these Kiva robots has benefited Amazon in terms of both time, and money. The robots have enabled the company to sale out millions of items to customers (426 items per second last year, to be more exact).

To keep the ‘human’ element in the warehouses, Amazon names these Kiva robots after enthusiastic employees. This healthy competition amid employees only leads to greater morale and efficiency, because hey – who wouldn’t want a robot to be named after them?

35 Most Colorful Places Of The World

The Selfie Syndrome Hits The Museums