The Outdoor Photographer of the Year Awards provides a unique forum to the photographers around the globe to share the outdoor beauty that they are surrounded with the global community. The awards celebrate budding as well as seasoned artists that capture the world mesmerizingly in their frames and the whole organizing team has been carrying this vision since the last seven years. This year too, the forum received photographs that were amazing beyond words. Scroll down to see the photographs that won in different categories of the Outdoor Photographer of the Year 2018.

Somebody in Japan designed an elegant Cat Tree that will…

The overall winner and runner-up will be announced at the Photography Show in Birmingham on 17 March. 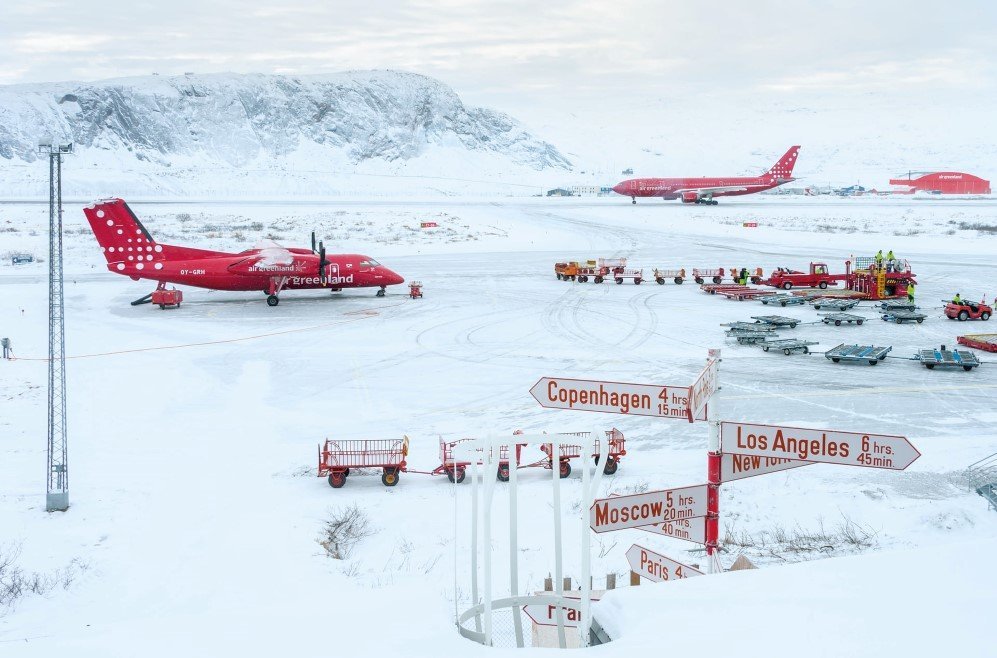 This is the largest airport in Greenland, so it’s not only a busy hub for domestic flights but also the main arrival point for international travellers. Air Greenland has a near monopoly on flights, so almost everything is in the company’s colours. It was the simple colour palette of this scene that appealed to me. My departure had been delayed by three days due to bad weather on the coast. 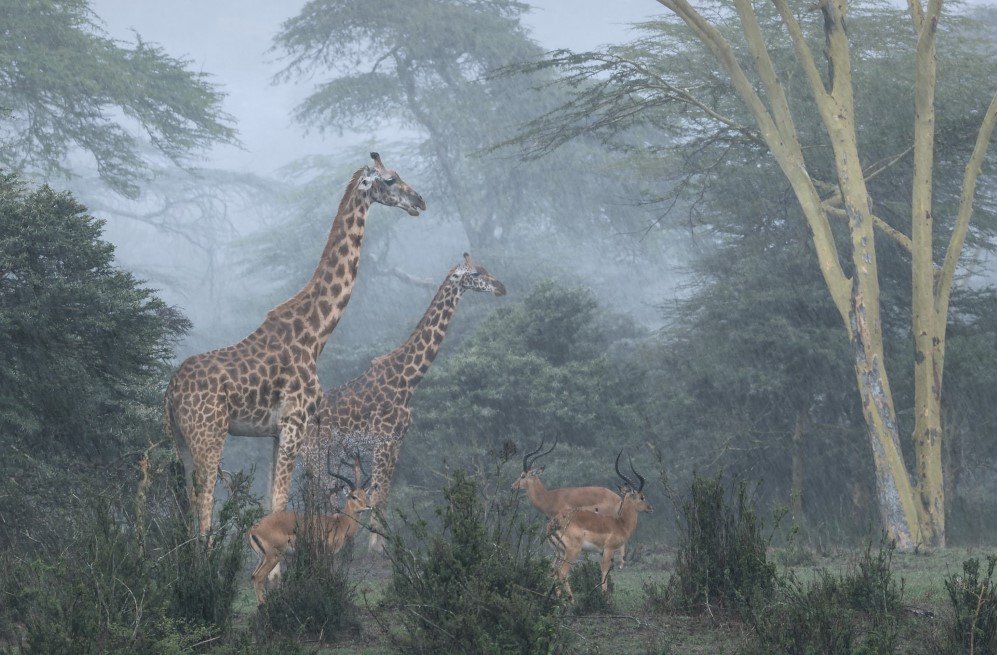 A charming picture of two giraffes and three impalas in a Kenyan National Park in Nairobi by Jose Fragozo from Portugal won the wildlife insight award. Jose explained: ‘I have observed lions hunting many times in the rain, which possibly explains why different species of preyed animals stay together; it’s a defence mechanism, so they can collectively sense predators better. In this case however, the lions were far away. The photo was taken from inside a 4×4 vehicle, and the major challenge was keeping the camera and lens dry’.

Location: Puffin, Isle of May, Scotland. 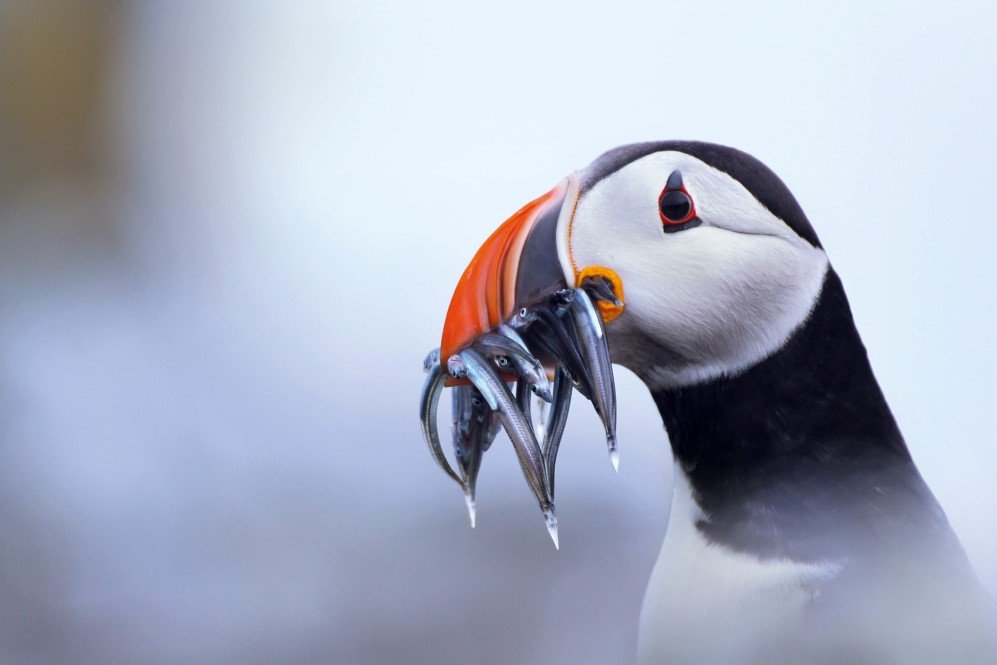 The misty grey background and subtle yellow lichens were the perfect background for the beautiful colours of this puffin’s bright, breeding-season beak. I chose a close-up shot to show as much detail as possible, including the internal structure of the sand eels and the puffin’s bill. I waited behind a rock for the perfect moment to arise when this puffin returned to land. Due to the low light and misty conditions, I used a wide aperture to deliver a sharp yet atmospheric portrait.

I love bighorns, and Sierra Nevada bighorn sheep are extra special because they are an endangered species. We had a harder time finding rams during our visit to their area this winter, but just as the light was beginning to fade, I spotted this ram standing majestically on a high ridge. Photographing at -25°C is always a challenge and I was afraid I wouldn’t have time to get my camera on my tripod before the ram disappeared from view. 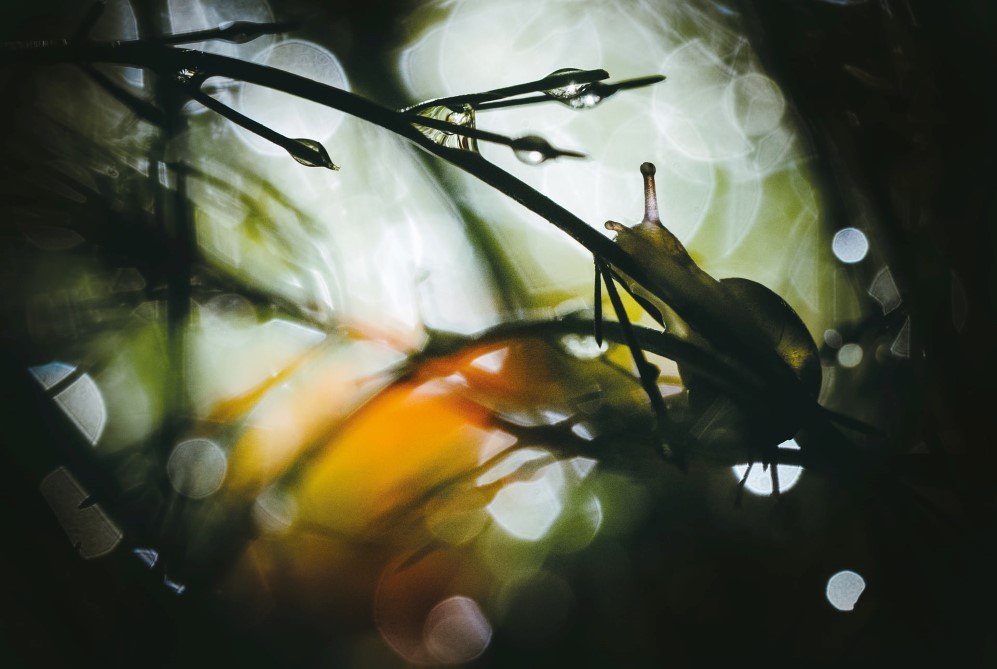 The asparagus plant in my garden – which has become a bush and produced berries – is a haven for wildlife. I normally look for spiders in it to photograph, but on this particular evening, after a rain shower, it was covered in tiny snails. The light below is from a backlit asparagus berry; I always try to visit after a rain shower, as I find backlit droplets bring the images to life.

‘View from Above’ by Laura Daly (UK) 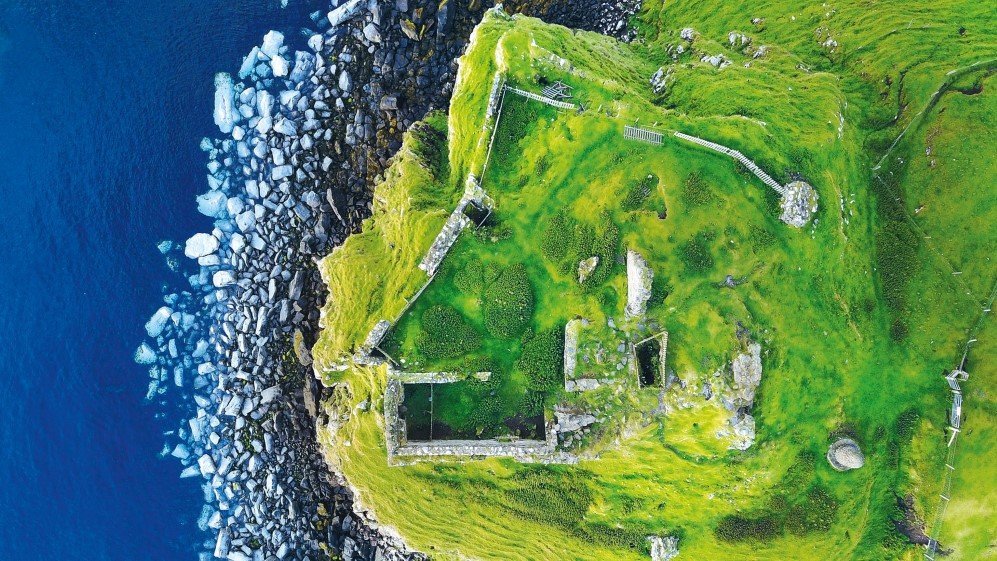 On our last night on the Isle of Skye, we ventured just five minutes from our accommodation to Duntulm Castle at sunset. Sharing the hillside with the midges and the sheep, we launched the drone, knowing the ruins were best seen from above. I chose to include the bright blue water of the ocean as it perfectly complemented the lush green grass, especially with the soft sunset light catching the walls of the castle. The view from above captures the beauty and lure of Skye, both natural and manmade. 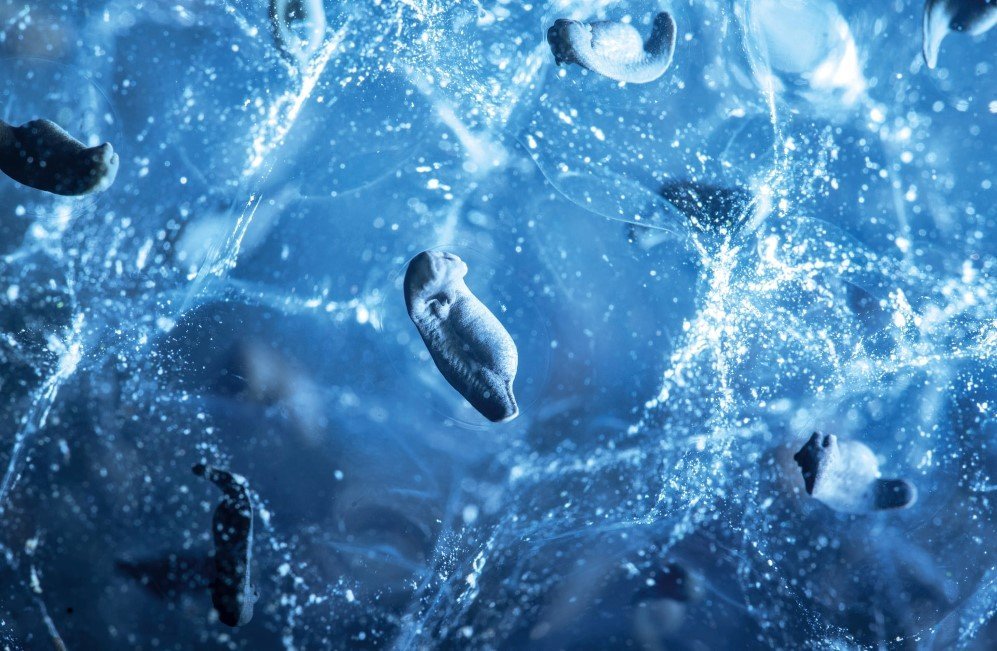 This frogspawn had been spawned in a puddle that was drying up on our farm in Cumbria. We rescued it as a way to teach my children about wildlife conservation and ecology, keeping it on our patio in a fish tank. I photographed it regularly throughout its growth to show the incredible rapid morphological development. We released the fully grown froglets back to a site close to their spawn site.

‘Under Exposed’ by Pekka Tuuri (Finland) 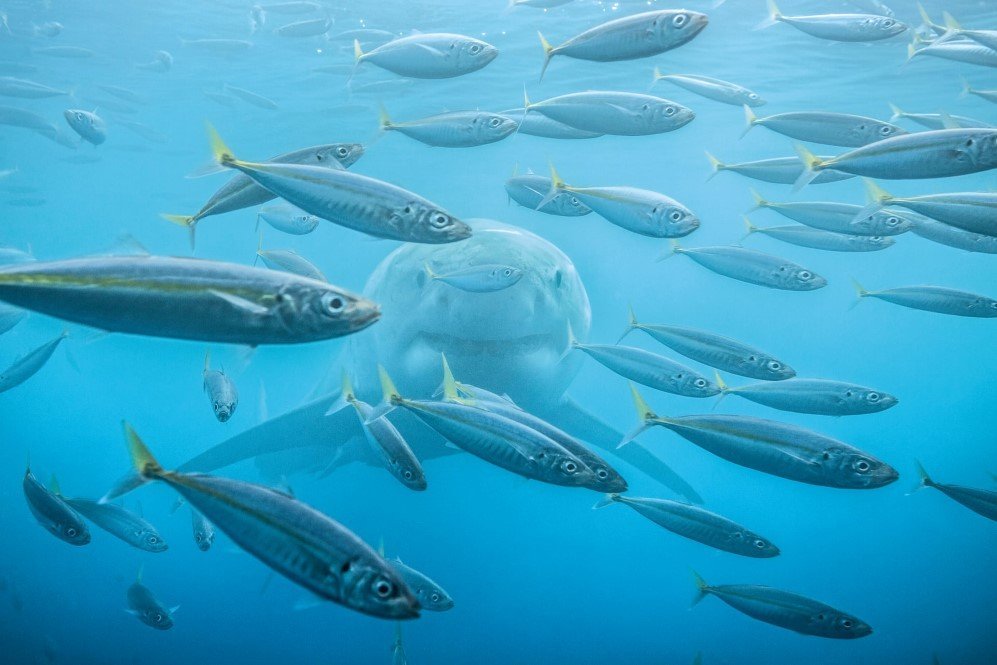 Isla Guadalupe is the world capital when it comes to observing great white sharks, but cage diving seriously limits the possibilities to take ‘fresh’ pictures. When I took this, the water close to the surface was quite milky, making photography very challenging. From out of the ‘mist’, I saw this great white shark lurking behind a school of fusiliers. I quickly focused on the shark and set a wide aperture to get focus blur on the fish, along with a fast shutter to avoid excessive motion blur.

‘A View from Above’ by Tom Sweetman (UK) 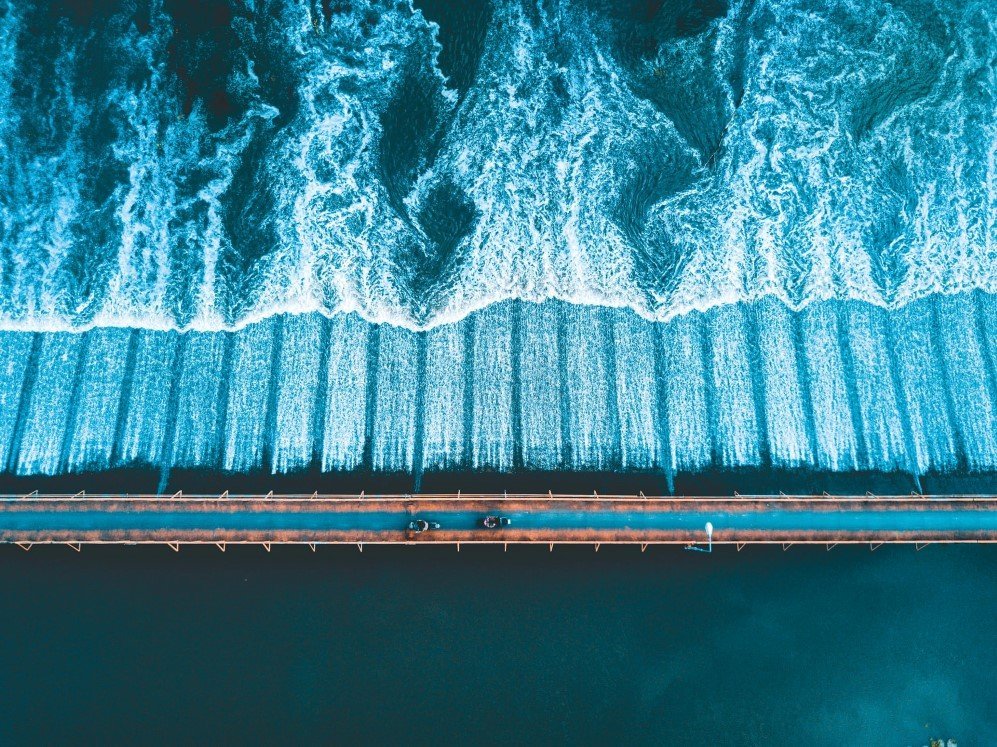 It was just before sunset in Chiang Mai and I decided to ride my scooter alongside the famous Ping river. As I was approaching a bridge I stopped to take a break and noticed that it was a motorbike bridge for locals, connecting two villages. I took this aerial photograph with my drone to document the incredible patterns in the river and the locals crossing the bridge on their scooters. Some days you just capture the moment.

‘At the Water’s Edge’ by Witold Ziomek (Poland) 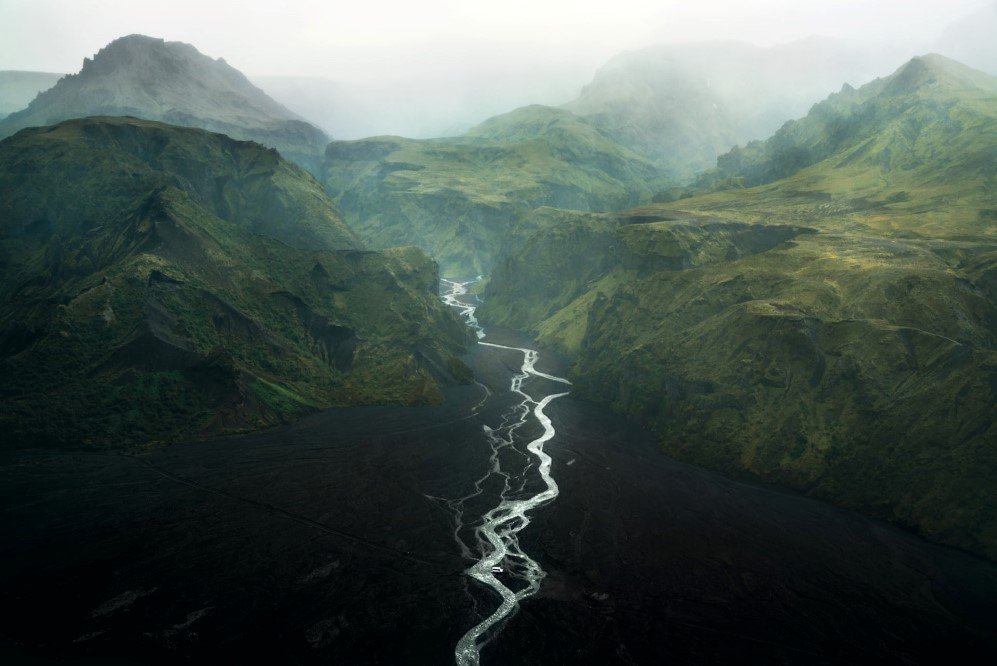 After a morning full of drama, during which we almost ‘drowned’ our car in a river – and then pulled out a young Frenchman who had lost his – we reached Thórsmörk, in the south of Iceland. We walked up to a viewpoint where we could see … exactly nothing, due to the fog. We waited, and eventually the fog started to lift, but I still needed to wait a lot longer for a car to appear in the perfect position to add a sense of scale to the mountain landscape.

‘Live the Adventure’ by Mark Bridgwater 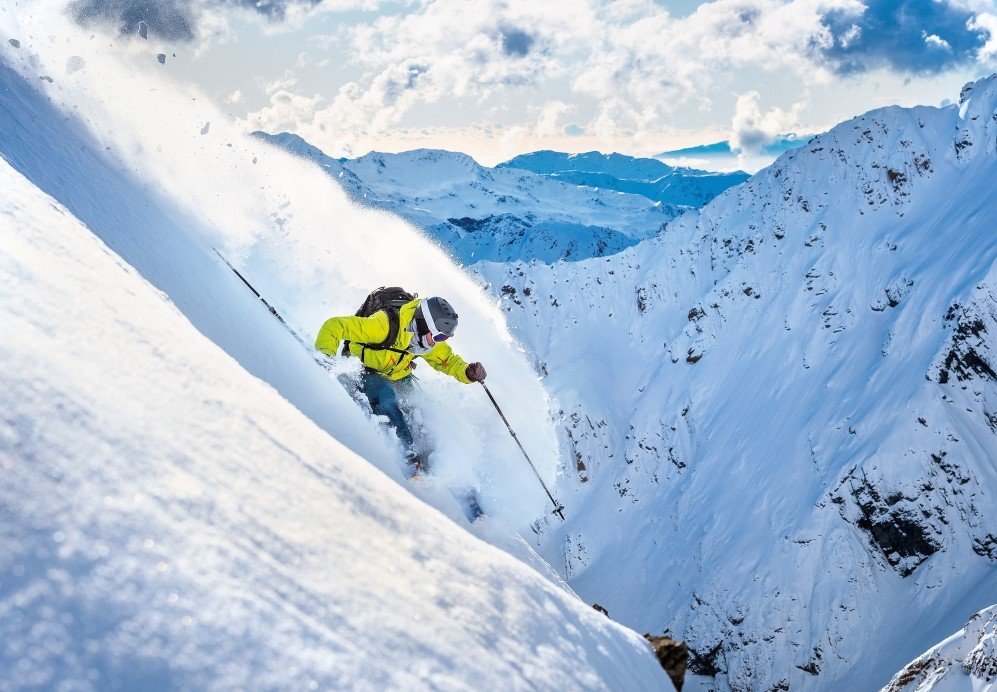 There are some moments in time when the photography stars align; clouds break in the perfect spot and the sun shines exactly where you are standing. This was one of those moments for Charlie Lyons and myself. While most people were oblivious to the perfection we had found on our mid-week excursion, we were having the time of our lives.

‘Under Exposed’ by Saeed Rashid (UK) 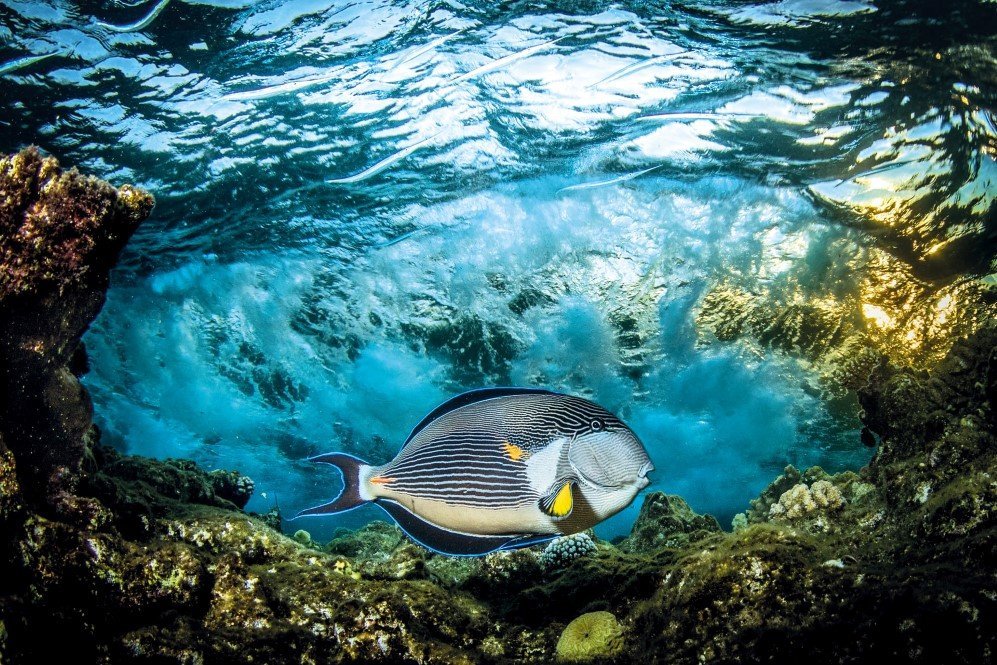 In the summer months, sohal surgeonfish tend to mate and lay eggs on the top of the reefs in the Red Sea. They fiercely defend their egg patch and rush upon anything that invades that area. They will often swipe their tail, which has a bony protrusion sticking from it that can be as sharp as a surgeon’s scalpel, towards the intruder. Because of this you need to make sure you don’t get too close as a photographer’s hands make a very easy target and often get cut.

Location: The Baltic Sea (somewhere on the way from the Swedish island of Utklippan to the Danish island of Christiansø). 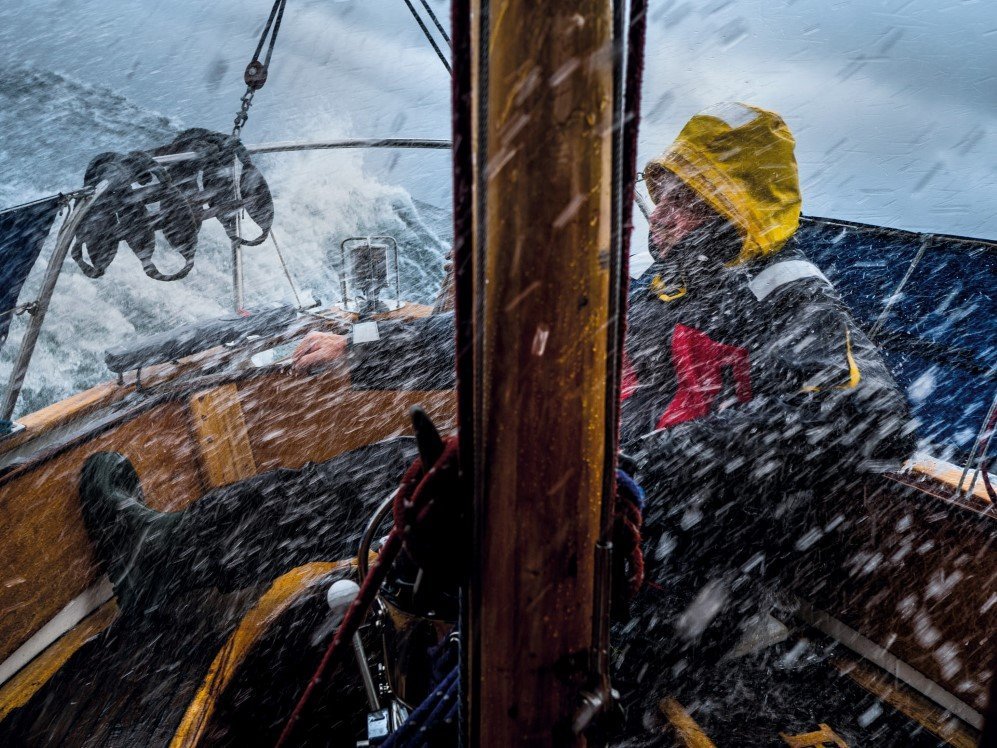 It was my first cruise on a yacht on the open sea and there were only two of us – myself and captain Jacek Pasikowski. I was helping Jacek take his small yacht Fri (‘Free’ in Danish) from the coast of Sweden to Poland, across the Baltic Sea. It was a stormy day, but the captain – who has more than 40 years’ experience sailing in open seas – remained completely calm and relaxed, even though waves were breaking over him every few minutes. 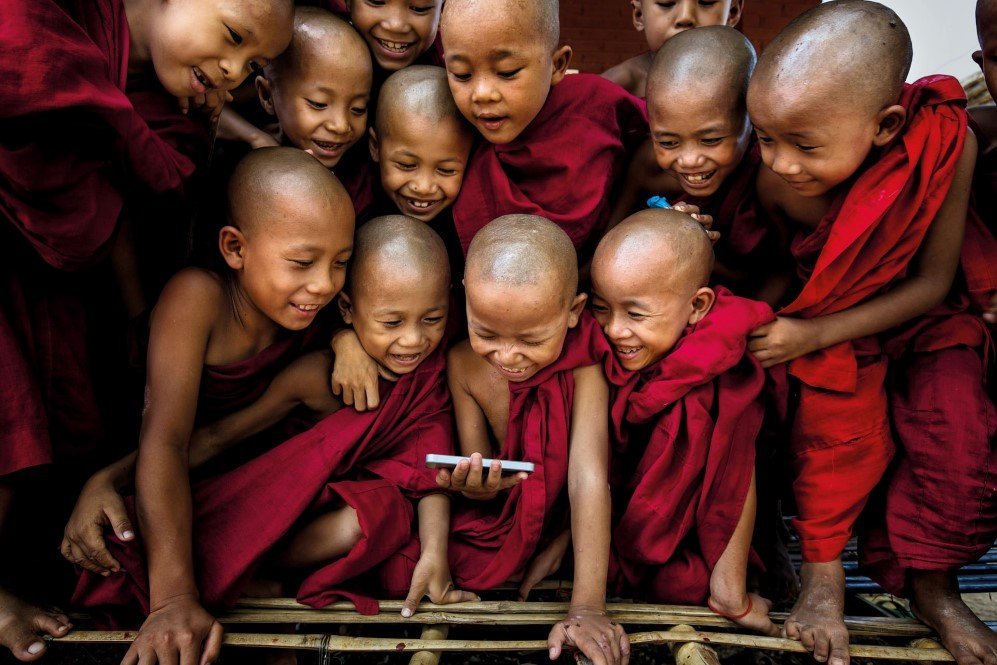 I took this photograph when I visited Shwe Gu monastery, which cares for orphans and trains them to be Buddhist monks. The orphans were gathering and playing, and I showed them a funny video on my iPhone – I did not expect them to be so excited! In the end, they were all scrambling to watch the video. Seeing them laugh, I immediately took my camera and photographed this magical moment.

‘Light on the Land’ by Simon Baxter (UK)

I originally captured a similar scene to this during a flurry of unexpected snow in April 2016. It’s typically the first spot I come to when exploring this private woodland, and I couldn’t help but capture it again when I was treated to these wonderful – but rare – conditions of mist with a hint of warm light as the morning sun tried to break through.

‘Light on the Land’ by Wojciech Kruczyński (Poland) 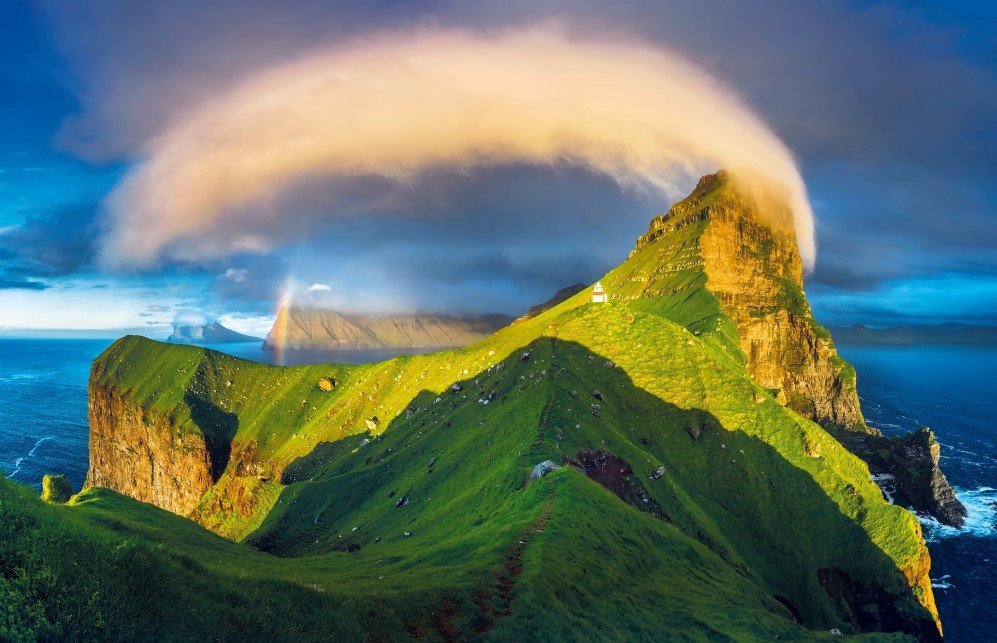 The picture consists of nine frames arranged in a three-by-three grid, which is quite difficult to put together and requires a lot of work, but with this beautiful place it was worth the effort. Weather conditions like this do not often occur in the Faroe Islands – I had to wait for three days in a tent in the rain for them. It was worth overcoming these difficulties, though, because Kallur lighthouse is located in one of the most beautiful places on the planet. 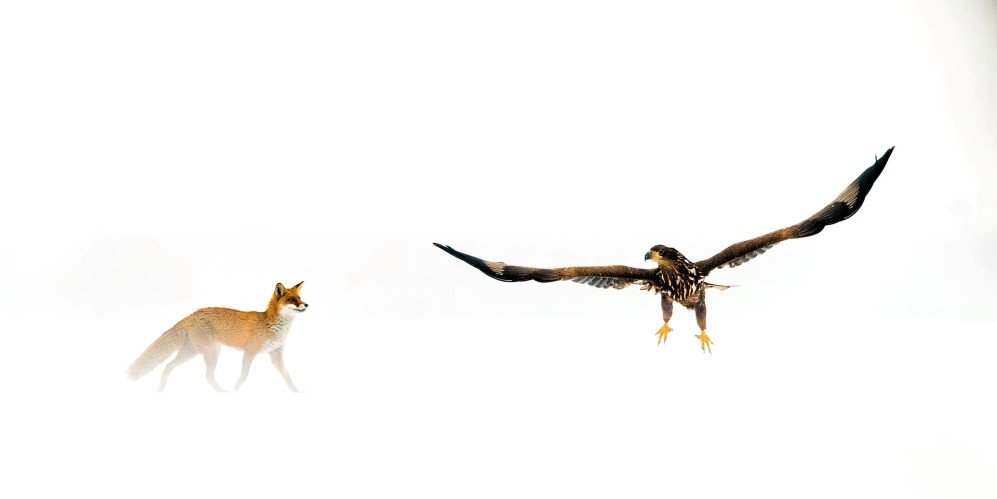 Over the last four winters I have spent more than 200 full days photographing from a hide, and in this time there have been only three occasions when I’ve seen a fox and an eagle together. In this instance, the fox didn’t approach the hide, but deliberately teased the birds resting on the ice. They occasionally flapped towards him, which emboldened the fox more and more – he continued to provoke the birds for about 10 minutes before vanishing into the reeds.

This is the magic of an Estonian winter: although the temperature was -20°C, the water at this spring was flowing like it was summer. As the morning sun peeked out from behind the frost-covered trees, it was like being in a fairy tale, with the warm orange light starting to penetrate the desolate blue landscape. To make the most of the scene, I created a stitched panorama, reflecting the cinematic drama of the location.

Do You Think A Plane Can Take Off On A Moving Runway?