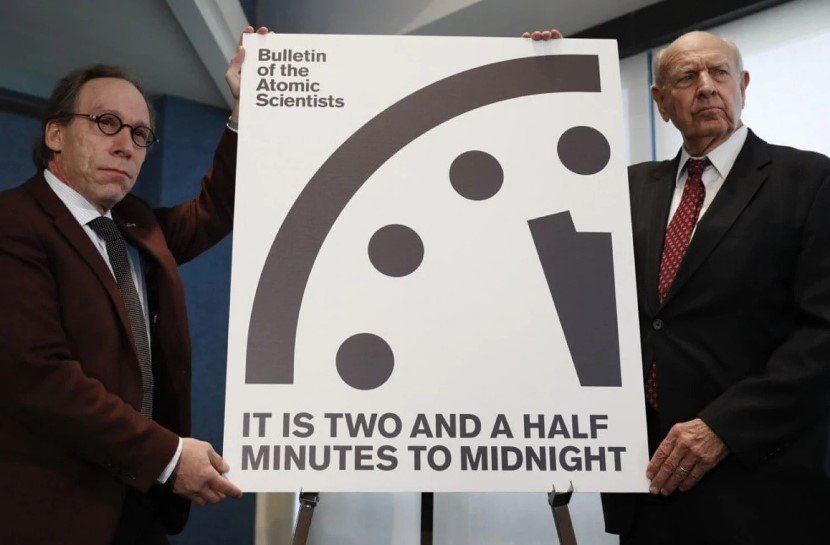 The human world has officially managed to spiral itself into a race against time! The Bulletin of the Atomic Scientists’ Science and Security Board has declared that the infamous Doomsday clock has moved up closer with two minutes to midnight due to the multiple threats posed by climate change and minimal efforts shown to reduce the potential nuclear risks. The clock has been seen to strike a similar point as the one during the Cold War that occurred in 1953.

This current alarming situation has been called the “the new abnormal” by the Science and Security Board including their Board of Sponsors which features 14 Nobel Laureates. Another major factor that has aided in this decision making apart from climate change and nuclear threats has been the increased use of information warfare.

“It is still two minutes to midnight. Humanity now faces two simultaneous existential threats, either of which would be cause for extreme concern and immediate attention. These major threats — nuclear weapons and climate change — were exacerbated this past year by the increased use of information warfare to undermine democracy around the world, amplifying risk from these and other threats and putting the future of civilization in extraordinary danger.”

This claim went on to explain how the “new abnormal” is greatly putting the entire human race to risk unless the powerful leaders of the world decide to take action and make alternative changes to avoid chances of this catastrophe.

The President and CEO of Bulletin of the Atomic Scientist, adds that an inevitable disaster is on our way and the clock is the closest that it has ever been to complete destruction unless the leaders and citizens of the world plan on doing something about the current situation.

Some of the proposed steps by the 2019 Doomsday Clock to avoid the catastrophe included that the U.S. and Russian leaders resolve all their differences pertaining the INF treaty, American citizens actively taking part in alerting their government over climate change and taking authoritative measures to prevent the military incidents on the NATO borders.

Along with those, countries all over the world were advised to do everything they can to cut down their potent greenhouse gas emissions and strictly follow the 2°C rise in the temperature goal in accordance with the Paris agreement. Trump’s authorities were asked to reconsider their decision towards limiting Iran’s nuclear program in order to prevent paying a hefty price in the near future.