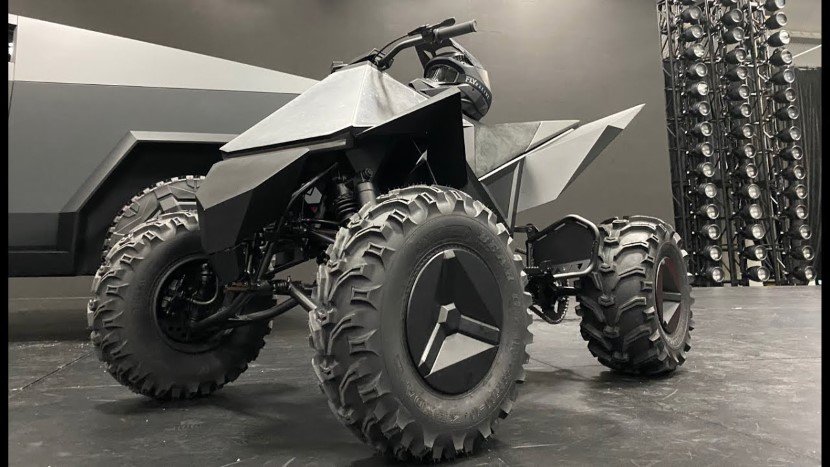 If you watched the grand unveiling for the Cybertruck last year, you would have seen the Tesla ATV make its striking debut near the end of the presentation, earning cheers from the audience.

Elon Musk did not introduce the Tesla ATV, merely using it to attest the Cybertruck’s loading capacity. The ATV smoothly climbed up the folding ramp and onto the truck’s bed, where it plugged into a 110V/220V outlet integrated on the rear side of the truck and charged by taking power from its battery.

Later, Musk confirmed on Twitter that this electric Tesla ATV, named the Cyberquad, will be available for purchase as an add-on for the Cybertruck. So far, there’s no news about when the Cyberquad will be up for grabs separately if it ever will be.

A video of a Tesla employee driving the ATV after the unveil left the viewers speechless, as it seemed to make no noise at all. ATVs usually let out a blaring roar as soon as they are powered up, but the Tesla ATV was the quietest amongst the chattering and cheerful crowd.

Tesla also brought the Cyberquad prototype along to the Battery Day event, along with Tesla’s three other upcoming electric vehicles. These close-up shots of the electric ATV shared by Electrek highlight its details and glamorous design.

Images from the unveil afterparty, generously shared by a user on Twitter, provide a view of the ATV from a different perspective.

A video of the Cyberquad from the unveil was also shared on YouTube, showing off the light guard at the front, similar to the Cybertruck.

The Fan-Made Cyberquad That Set The Road Ablaze

Tesla fans simply can’t wait till the Cyberquad ATV comes out, and Rich Benoit and Steven Salowsky at Rich Rebuilds share the same enthusiasm. Tesla dropped the electric ATV as a bomb and left fans in both confusion and anticipation, so the guys at Rich Rebuilds decided to build a Cyberquad of their own, using a 2008 Yamaha Raptor 700 ATV and parts from Zero Motorcycles bikes to start off and crafting the body themselves to imitate the Cyberquad.

The twenty-minute video uploaded on their YouTube channel shows the production process as well as their version of the Cyberquad in action.

The performance their ATV achieved was mind-blowing, to say the least. This DIY ATV successfully went from 0 to 60 mph exceptionally fast, in a mere 3.9 seconds as compared to the original Yamaha Raptor’s 5.4 seconds, as well as a top speed of 102.5 mph. The 500-pound (226 kilograms) ATV was also able to tow a 5000-pound (2267 kilograms) Humvee uphill.

All We Know About The Tesla ATV Cyberquad

Although Tesla has yet to share details and specifications, Musk did confirm that the Cyberquad was a two-seater on Twitter. He added that they don’t make road bikes as they are dangerous, sharing his near-death experience while riding one.

We’ll aim to have it come out same time as truck. Two seater electric ATV designed to work with Cybertruck will be fun! Electric dirt bikes would be cool too. We won’t do road bikes, as too dangerous. I was hit by a truck & almost died on one when I was 17.

According to the tweet, the Cyberquad is expected to come out in late 2021, which is when the Cybertruck deliveries are promised to commence.

Lack of details regarding the ATV has inevitably led to several speculations. “If Harley-Davidson could fit a 15.5 kWh battery in the LiveWire motorcycle for a 146-mile range, we’re betting Tesla can top both those figures,” The Drive believes. CNN also notes that “Similar-looking internal-combustion-powered ATVs from Honda (HMC) range in price from $5,000 to $10,000. Honda frequently shows its Ridgeline pickup carrying Honda ATVs and motorcycles in its bed.” Perhaps the price of the Tesla Cybertruck is similar, or it may be completely unexpected depending on what features it has.

Knowing Tesla, it wouldn’t come as a surprise if the Cyberquad specs are way beyond anything we could imagine, as was the case with the Cybertruck. It looks quite promising so far, but there’s no knowing what Tesla has in store for us.