Sleepytroll attaches to any baby cradle and rocks it automatically

Sometimes parents repeatedly have to get up in the middle of the night and put their infant back to sleep by rocking them. Though the parents don’t wish to do it repeatedly and for this purpose, a sensor-equipped baby bed was designed that does the job for them. However, Sleepytroll takes a different approach, as it gets attached to existing beds and strollers, and rocks them when it detects the baby is waking up.

Ståle Flataker, a Norwegian entrepreneur, created Sleepytroll. It is designed by Abry & Kavanagh, the award-winning and most experienced industrial design agency in Norway. It monitors the sleeping infant using a motion sensor and a microphone and is attached to strollers or beds via a ratcheting ladder strap. When the device detects the baby movements or sounds that are associated with waking up, an integrated flywheel is activated to get itself rocking, and everything else that it is attached to it. The baby may become dependent on the rocking motion; therefore, it stops automatically after three minutes. 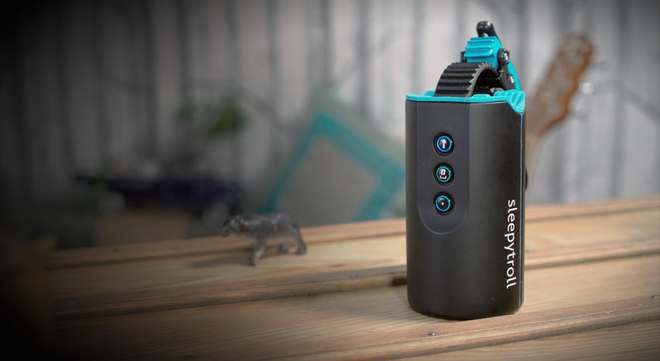 The sensitivity of the sensors can be adjusted depending on the weight and size of the bed or the stroller, and also on the behavior of the infant. It features three rocking speeds, and the users can choose any of them. Even the rocking motion can be activated manually, which ceases after half an hour of operation. As it can be used in an outdoor environment on a stroller, therefore it is made water-resistant. It has built-in rechargeable batteries which make the device capable of performing for hours without worrying about charging it again and again.

According to Flataker, the device is not designed to replace the hands-on baby care but is intended to allow the parents to get all the rest they need. The retail price of the device will be somewhere in the range of 180 US Dollars (NOK 1500), but you can get a Sleepytroll of your own, through its Kickstarter campaign by pledging 72 US Dollars (NOK 599). If all goes according to the plans, then it is estimated to be delivered in Feb 2019.