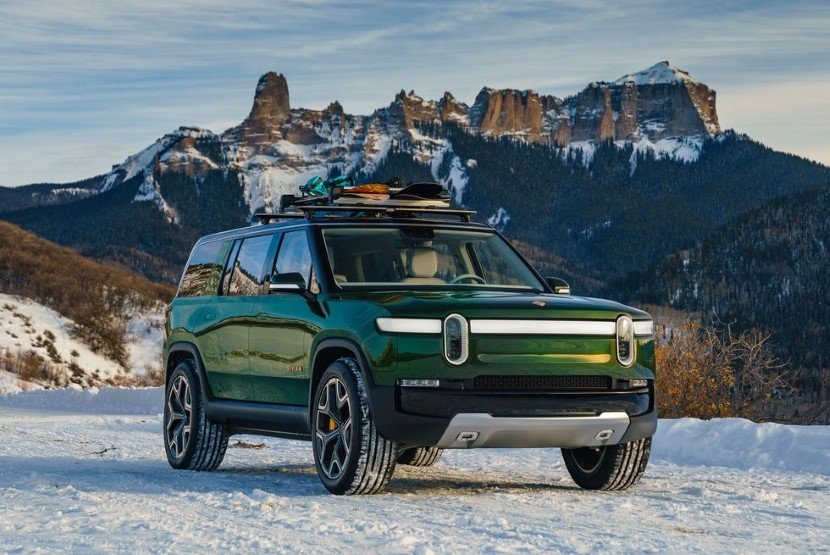 Rivian R1S is about to be the second vehicle in the production lineage of Rivian, a Michigan based automotive company. Not only is it their second vehicle, but also the only seven-seater all-electric SUV after Tesla Model X. R1S is all set to take direct hit on the Model X due to its lesser price tag. The company has shared the view that R1S has inherited many of its features form company’s R1T Pickup. R1S comes with three battery variants i.e. 105.0 kWh, 135.0 kWh, 180.0 kWh. The Rivian SUV gives a claimed mileage of 410 miles on full charge on the largest battery variant.

The company is ensuring that it will start delivering its most anticipated SUV to the customers by the end of June 2021. The company itself being a fresh entrant in the automotive lineup, seems confident and eager enough to leave a model that could potentially mark its territory in the market of electric SUVs. The Rivian R1S price is starting at $ 77,500 and it has been reported that a more affordable version will hit the market somewhere around the beginning of the next year. The company further states that the Rivian R1S will be delivered directly to the customers but it is also hopeful to be setting up a network of service centers like Tesla shops that could definitely prove to be more convenient and self-sufficient marketing wise.

R1S is going to be the only model available at the launch but that shouldn’t stop you from considering to park it on your garage. R1S features all the coolest quirks and features of the off-road as well as the adventure variant. The SUV rooms a full glass panoramic sunroof, underbody protection, and full Wi-Fi support for online coverage, 1000 lumens flashlight in the driver’s door for emergencies, a powered tonneau cover and an onboard Air compressor.

Rivian R1S carries the same battery packs as its sister version R1T pickup. It also mirrors the same powertrains, much of the styling and many of the specs as the pickup. RIS is set to be available in three different battery power packs, 105-kWh, 135-kWh and 180-kWh. The largest one claims to take the vehicle to an astonishing range of over 400 miles. If, however, a customer is reluctant to be spending a little extra on the battery, they can opt in for the midrange or lowest battery powers with the capacity to drive them up to 300+ miles and 250+ miles respectively.

The R1S model is going to be not only a good family car, but a fast family car also. The top 753hp and 135-kWh version claims to take the car from zero to 60mph in only 3.0 seconds. Yes, that is faster than most supercars out there. The lowest battery version takes only 5.0 seconds to achieve that and that is still astonishing. Every wheel of the R1S is equipped with a separate electric motor giving it a smooth all-wheel drive both on and off the road. Adjustable air suspension will be installed in all R1S models which will give the car a ground clearance from 8 to 14.5 inches according to the requirements of the terrain but that is a common feature and almost all high-end SUVs offer that.

Payload and Towing Capacity of the Rivian R1S

The R1S has, as briefed earlier, an all-wheel drive with a separate electric motor at each wheel which makes it capable enough to tow around 7700 pounds. The weight is less likely to impact the range of the battery but the people who believe they will be towing that amount regularly should consider opting in for the largest battery pack version. The R1S has the payload capacity of 1800 pounds.

Fuel economy and Miles per Gallon of R1S

The fuel economy estimates of the R1S have not yet been released by the US Environmental Protection Agency but as soon as they do, the results will be intimated. As fat the real-world MPG of R1S is concerned, nothing can be said with absolute certainty as it has not been test-driven yet but after getting our hands on it, we will update this section.

The R1S, like R1T, features a beautiful, sleek and contemporary interior design with top-notch leather seats, wood trim, and two large displays, one as the driver’s gauge and the other for infotainment.

The R1S has spacious cargo areas. Front of the vehicle offers a 12 cubic-feet cargo capacity and the rear one can carry a decent amount of cargo in itself as well. The third row of the passenger seats enhances the utility and comfort of the Rivian SUV interior.

The R1S’ large horizontally mounted infotainment system is user friendly and full of interesting features. In order to keep it from getting complex like many touch screens interfaces, Rivian has placed the base controls like Navigation, Climate Control and Media at the bottom of the screen and the rest is quite simply embedded in the screen in form of expandable tiles. The screen is programmed to avoid any unnecessary complexity and so the tiles don’t open into sub-menus but instead slide out the options at one side. Rivian hasn’t released any more information about the infotainment system but it is expected that the system will offer Apple CarPlay, Android Auto and an on-board Wi-Fi hotspot.

The 2021 R1S has not yet been crash tested by the NHTSA (National Highway Traffic Safety Administration) or the IIHS (Insurance Institute for Highway safety) but Rivian claims that the R1S and every other model will be equipped with hands-free drivers-assistance technology and the Suite called Driver+.

The key safety features of Rivian R1S will include:

There has not been any statement by the company to hint about its warranty and maintenance coverage plans but it is believed that service will be thorough enough to match the rivals in the market.