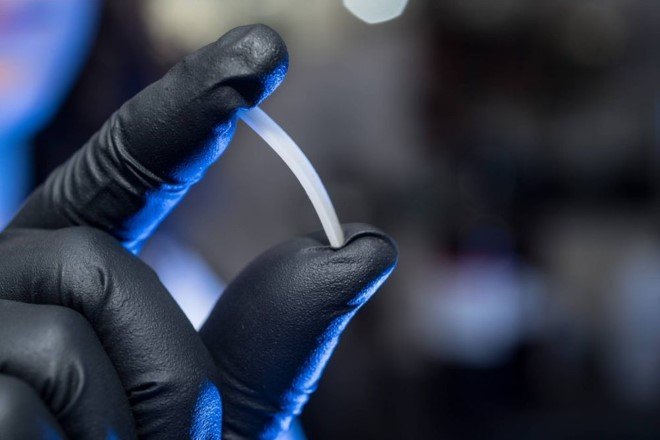 We humans can’t seem to get enough of plastic. Whether in the form of shopping bags or something as simple as a straw, plastic rules our lives. However, most of it goes to reside in oceans when thrown away. Since, we’re not letting go of plastic anytime soon, chemists at Colorado State University have developed a polymer that has all the qualities of plastic, except that it’s not plastic. Rather, it’s a recyclable and biodegradable version of the carcinogenic product.

This polymer fulfills all our requirements as an alternative to plastic i.e. it weighs as little as plastic, it resists heat and it is durable. The only and most beneficial difference is that it is much easier to recycle than plastic, which requires long and toxic processes for degrading.

While the product is useful, the process behind it is quite simple as well. The environmental-friendly procedure simply consists of polymerizing the monomers at room temperature. This barely takes a few minutes and requires a very small quantity of catalysts. The process doesn’t use any solvents.

In order to break down the polymer for recycling, all it needs is a mild reaction with a catalyst, after which it achieves its monomeric state. The best part? It does not require purification before re-polymerization!

The masterminds behind this invention have re-iterated their work many times to create the current prototype, which works better than ever. While older versions were soft and sensitive to heat, this newer version resembles plastic the most and does not require extremely low temperatures for manufacturing, like its predecessors did.

LEGO launched a fully functional wind turbine made from…

This home features a reading nook right in the backyard

“The polymers can be chemically recycled and reused, in principle, infinitely,” says Eugene Chen, lead researcher on the project. “It would be our dream to see this chemically recyclable polymer technology materialize in the marketplace.”

The chemists hope that their new invention can revolutionize our plastic needs while decreasing the amount of plastic we dispose in oceans and landfills.

We wish the same.

The research was published in the journal Science.