Is IonQ’s New Quantum Computer really the best of all? 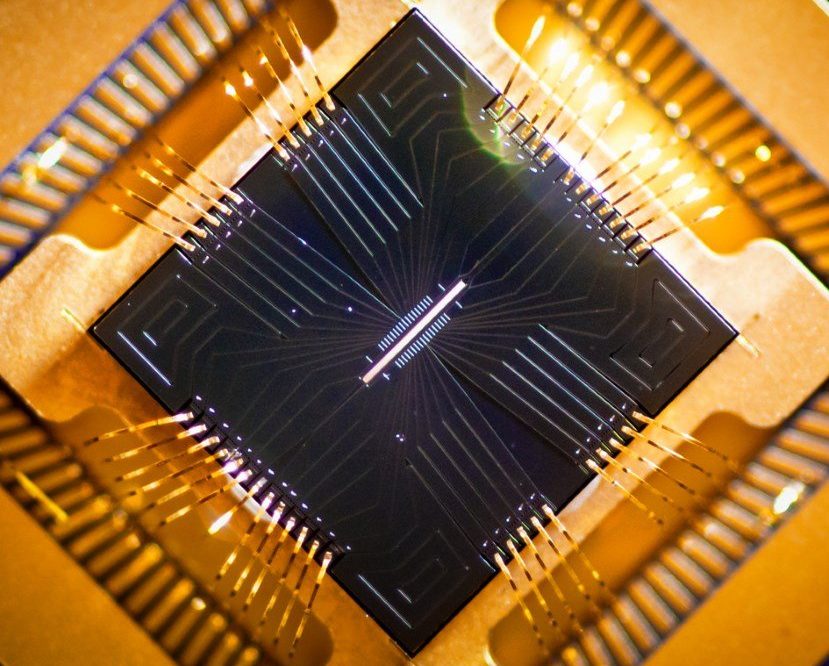 IonQ unveiled their new quantum computer on October 1st, 2020 and boldly claimed it to be the most powerful quantum computer that has ever been released. On top of that, IonQ’s CEO said that they will be able to double the number of qubits every eight months for the next few years, meaning its hardware could overpower classical computers within two years.

If you have heard about quantum computers before, you would know that they are no ordinary computers. In case you haven’t, here is a brief introduction.

What is a quantum computer?

Classic computers are not yet powerful enough to handle some of the most complex challenges we are faced with today. Quantum computers have been built on the basic principles of quantum physics. They make use of quantum mechanical phenomena, such as superposition and entanglement to perform highly complex operations on data. Watch this video to get a clearer idea of what quantum computers are.

Some of the components of a quantum computer are explained below.

About IonQ and its new 5th generation quantum computer

IonQ is a quantum computing hardware and software company based in Mary-Land, founded by Jungsang Kim and Christopher Monroe in 2015.

Today, few of the most established tech companies including Google, IBM, Microsoft, and Intel are racing to achieve the best possible results in the field of quantum computing. However, IonQ outperformed these companies by recently announcing their new next-generation computer, which is claimed to be the most powerful computer that has ever been made.

Although, all these companies are chasing the same goal, they are still taking on unique approaches for its accomplishment. Google makes use of superconducting qubits to power their quantum computers and D-Wave uses annealer technology, while IonQ and Honeywell make use of ion traps.

IonQ’s significant claim of creating the most powerful quantum computer is not fallacious, as this computer has been promised to incorporate 32 qubits and reduced error rates, with 99.9% fidelity. According to the metric devised by IBM, this totals up to a 4 million quantum volume, dashing past the competitor Honeywell, which announced the accomplishment of a quantum volume of 128 on their quantum computer just a day preceding IonQ.

Jungsang Kim mentioned that ‘the four million number only required 22 qubits with 99.9% fidelity. If all 32 qubits had been used, the expected number would have been a staggering 4 billion, which is 31 million times greater than any quantum volume ever published’. ‘This final QV is only expected to be limited by gate fidelity rather than the number of qubits’, he said.

IonQ’s previous generation of hardware featured only 11 qubits and could not compete against other companies. Peter Chapman, CEO of IonQ, told Ars about how they improved their hardware:

“We went through and identified all the sources of error, which is its own kind of R&D. And then you stack-rank them and say, ‘This is the next thing I need to go after.’ What we found in the previous system was that there was a source of noise that was the largest contributor to the problem of fidelity. And in this system, we managed to remove it.”

What makes IonQ stand out amongst their capable competitors is the use of their distinct technology. The company utilizes static array machines, where the qubit ions are confined by linear ion traps. Lasers are then used to execute the required tasks.

The qubits used by these quantum computers add exponential power to them. IonQ has stated that they have the ability to tap into these exponential increases, leading to the trailblazing numbers achieved by IonQ regarding quantum volume. With their encoding, they can make an almost perfect logical qubit with just 13 physical qubits, in comparison with other hardware architecture which can take over an estimated 100,000 physical qubits.

The new system we’re deploying today is able to do things no other quantum computer has been able to achieve, and even more importantly, we know how to continue making these systems much more powerful moving forward. With our new IonQ system, we expect to be able to encode multiple qubits to tolerate errors, the Holy Grail for scaling quantum computers in the long haul.

“In a single generation of hardware, we went from 11 to 32 qubits, and more importantly, improved the fidelity required to use all 32 qubits. Depending on the application, customers will need somewhere between 80 and 150 very high-fidelity qubits and logic gates to see quantum advantage. Our goal is to double or more the number of qubits each year. With two new generations of hardware already in the works, companies not working with quantum now are at risk of falling behind.”

The company has set some ambitious milestones for the future. Even though their new quantum computer’s capabilities are measured in quantum volume, updated measures will still be required as the company releases newer iterations of their machines in the years ahead, according to Peter Chapman. He said, “The number will become so large, we’ll have to leave quantum volume behind.”

Forbes asked IBM and Honeywell, who occupied the previous largest QV numbers, for their thoughts on IonQ’s announcement.

IBM responded, “The Quantum industry announcements this week are interesting. Certainly, the ion trap-based firms are increasing their competitive intensity in that segment of the market. The growing use of Quantum Volume as a metric is also worth noting. That said, for further comment, we will wait until we see the associated research published and learn more about the details of these news announcements. The IBM Quantum team is confident in our roadmap announcement earlier this month. We have published our results and innovations for review and discussion with the scientific and analyst community. Our progress and innovations are demonstrated and available on the IBM Cloud now. To serve our rapidly growing base of over 260,000 registered users, we remain focused on accelerating growth in real usage and continuing to drive up circuit fidelity and overall circuit volume.”

Tony Uttley, CEO of Honeywell, also expressed his opinion, “IonQ’s announcement is good for the advancement of quantum computing in general. The fact that you can make large increases in qubits like this is what makes trapped-ion such an exciting technology. It shows the power and future potential of the platform.”

Statements by partners and investors on the new quantum computer

“IonQ represents one of the most promising approaches to quantum computing that is both scalable and does not require any significant material science or manufacturing breakthroughs. The company’s unique combination of academic research and experience plus proven performance has led to their system demonstrating industry-leading performance and helping break new ground in quantum computing.”

Alaa Halawa, Head of US Ventures at Mubadala Capital also voiced his optimism.

“We believe IonQ is the most promising and advanced technology for developing quantum computers at scale. This latest milestone represents decades of academic research and experience, proven performance, and superior technology. This latest breakthrough is also particularly exciting for industrial companies in areas of material science and petrochemicals, enabling new applications that are crucial for enhancing competitiveness in the market.”

The Head of Algorithms International at QC Ware, Iordani Kerenidis, talked about the collaboration with IonQ.

“We design quantum machine learning algorithms to drive performance on near-term hardware. We collaborated with IonQ in implementing QC Ware’s quantum classification algorithm on their system, and the excellent results attest to their unique approach and demonstrated performance.”

Christopher Savoie, CEO and Founder of Zapata Computing, also expressed his eagerness to work with IonQ on the new project.

“IonQ and Zapata work together to create and implement quantum applications. We are excited to unlock new potential across industry verticals—and make IonQ’s latest generation of devices available to users of our software platform, Orquestra.”

“IonQ and Cambridge Quantum Computing are working together to create and implement applications for quantum computers, for the benefit of CQC’s customers, and are excited to see what new applications are possible with IonQ’s newest generation.”

“IonQ’s approach to quantum represents the most promising pathway to achieving commercial success with quantum computers – and this breakthrough in performance and fidelity further validates that approach. We are thrilled to continue working with the team to realize the full benefits of quantum.”

Arman Zaribafiyan, Head of Quantum Simulation at 1Qbit, also expressed his enthusiasm for traversing the sea of future possibilities with IonQ.

“IonQ and 1QBit are working together on applying quantum computers to solve previously intractable problems in a variety of industries and are excited to explore new possibilities resulting from the release of IonQ’s newest generation of devices.”

Some also pointed out issues in IonQ’s intense announcement. Scott Aaronson and Greg Kuperberg said that IonQ appeared to have made substantive quantum computing progress, but they disagreed with its assertion of succeeding in creating the ‘perfect’ qubits.

Aaronson called this claim of perfect ‘an obvious hyperbole’ until they prove the qubits’ capacity for full error-correction. Kuperberg also stated, “They do not say what ‘low’ means when they say that the gate errors are low.”

Kuperberg explained, “If you want an analogy, it feels like announcing a new sports car that could be very good, together with comments about specs like engine power as well as comments about customers, but before releasing a video or data of track performance.”

On the other hand, Christopher Savoie suggested that it would be almost impossible to determine whether a computer is better than another in such an early stage of development. He said, “The difference in approach means that one company’s machine may be suited to certain quantum algorithms and operations, while another’s might be suited to a different set.”

IonQ has yet to release a product roadmap for their computer, but we can expect a five-year roadmap “in about six weeks or so”, according to the CEO, Chapman’s words. Customers of IonQ will soon be able to use the new machine in private “beta”, Chapman said.

A Mysterious Discovery On Venus Indicates Possible Existence Of Life