Polaris Slingshot is part-motorcycle, part-car but all-in-all an ultimate roadster 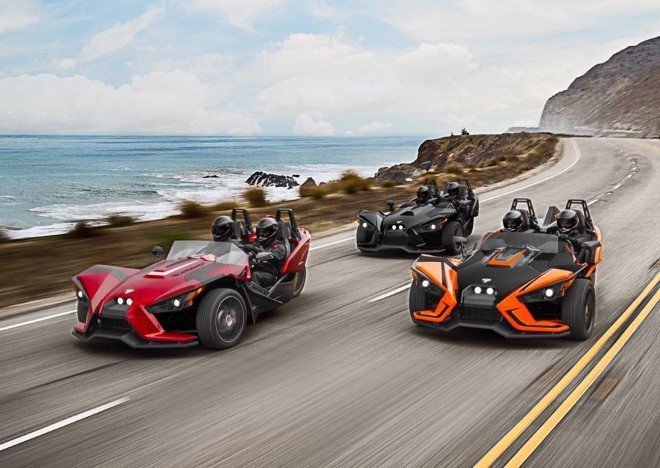 Many have failed to answer what the Polaris Slingshot really is. Is it a car? Is it a motorcycle? The situation is pretty much like the famous scene from Superman’s movie where people have trouble identifying the flying object in the sky – it wasn’t a bird, it was Superman obviously. If only categorizing the Polaris Slingshot was this easy. So far, people are calling it the ‘three-wheeled go-kart on steroids’. 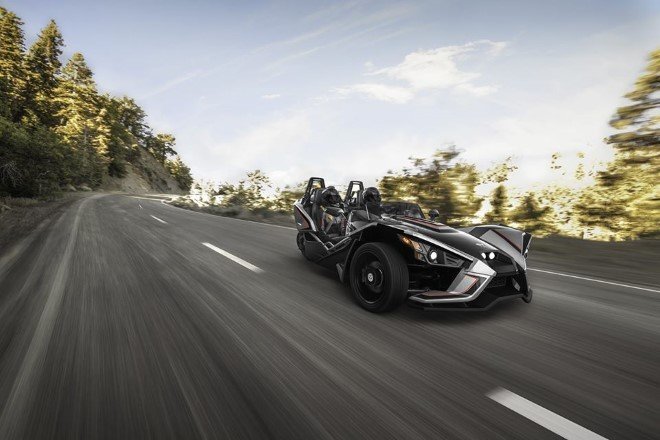 The problem of identifying and categorizing this vehicle has become so severe that the states aren’t letting it be licensed, and surprisingly even the company can’t help in this department. So, before you switch to the other tab and start looking for Slingshot images out of sheer curiosity, allow me to describe this mysterious ride. It has a long hood, two wheels on the front, side-by-side seats and a steering wheel – yet it cannot be categorized as a car. Why? Because it has no side doors, no top, no trunk and no safety features except for three-point seat belts and roll bars at the rear of each seat. 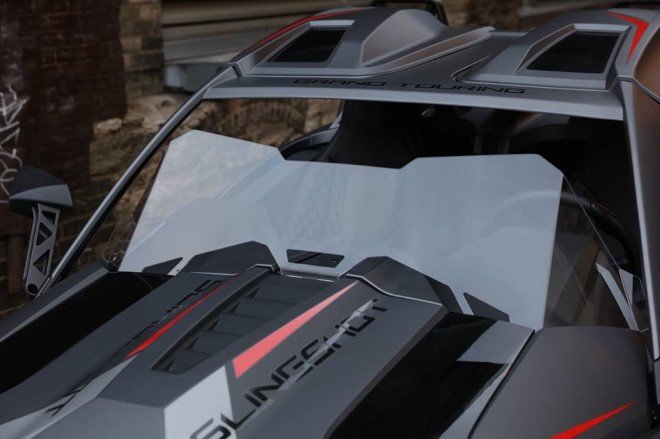 It is powered by a 2.4-liter, inline 4-cylinger GM Ecotec engine coupled to a five-speed transmission. The Slingshot weighs around 1,700 lb (790 kg), and has the ability to produce 173 hp (127 kW) and 166 ft lb. of torque (225 Nm). As for the speed, the three-wheeled go-kart on steroids can move at 120 mph (209 km/hr). There are ABS brakes so don’t worry about losing control. The incorporation of a double wishbone suspension and anti-sway bar upfront allows the vehicle to drive smoothly over corners. 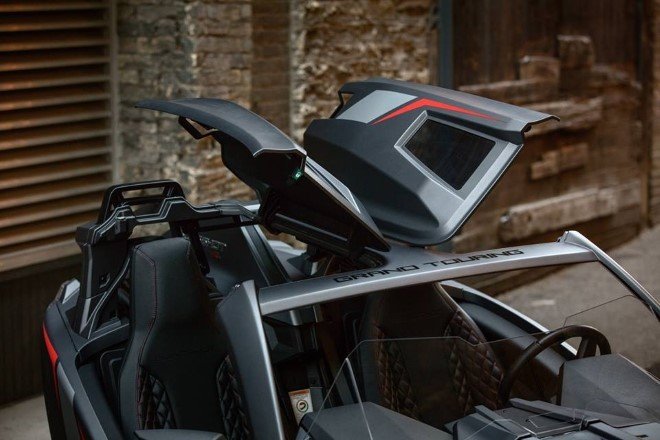 In addition to this, the base model has two 17-inch front wheels and a single 18-inch wheel in the rear while the Slingshot SL and SL LE versions come with a two 18-inch forged aluminum front wheels and 20-inch rear wheel. During a test drive, the Slingshot passed the ‘terrain’ test as it performed well on side streets, country roads and twisty foothill asphalt despite being low to the ground – thanks to the suspension! 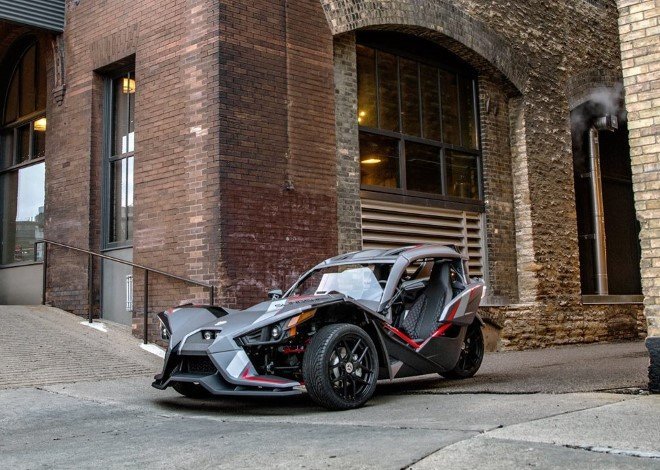 Moving on, there is enough room to store grocery or even a couple of helmets as there is a huge glove compartment and locking cubicles behind each seat. However, the Slingshot has its shortcomings. For instance, the engine heats up the seats quickly leading to an uncomfortable (read: sweaty) experience. An easy solution would be to either increase ventilation or to thicken the firewall between the cabin and the engine bay. 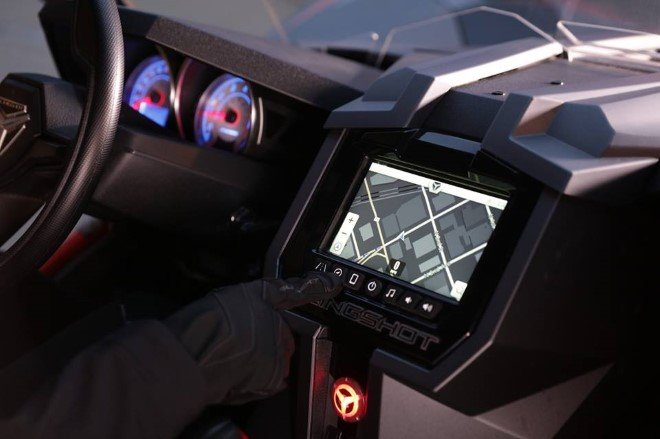 Similarly, the screen fitted for camera and entertainment purposes becomes almost impossible to see if the sun shines on it at a particular angle. The same problem arises when you wish to see the gas gauge; there are a series of bars across the top of the digital screen present within the speedometer which shows overall mileage, trip meter and other relevant readings. When the tank is full, you’ll see all black bars and as the gas is consumed, the bars turn white. However, these aren’t visible when the sun shines on it. 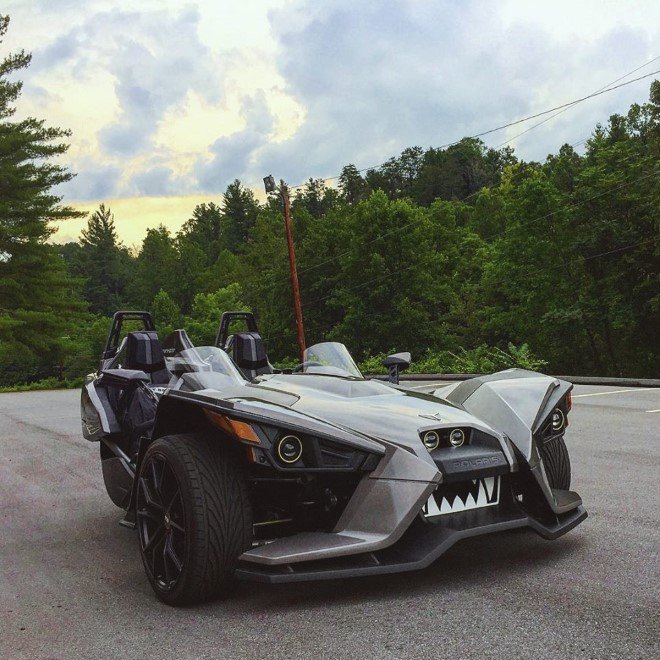 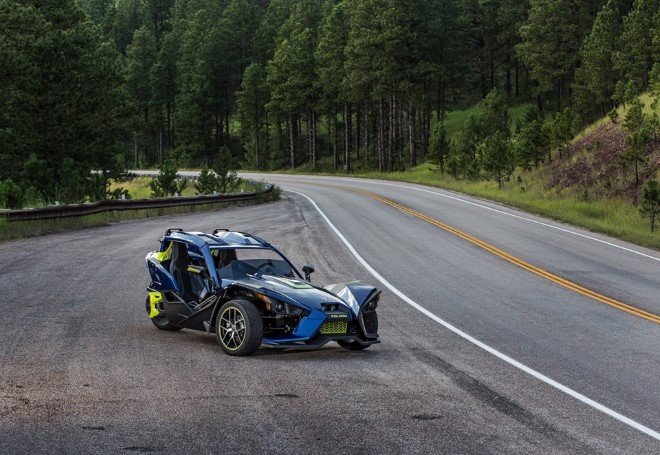 The Slingshot is a robust vehicle despite its body and interior being made entirely out of plastic as its back tire takes up most of the traction and friction. All in all, this vehicle – yes, we’re sticking to the term ‘vehicle’ – seems pretty cool, and if you wish to gain attention on the streets, the Slingshot is all you need!