Year In Review: Oxford Dictionaries’ Word of The Year 2014

originated as an abbreviation of vapor or vaporize

v. inhale and exhale the vapor produced by an electronic cigarette or similar device.

Vape became significantly popular after the growing popularity of e-cigarettes. Usage of Vape peaked in April, 2014 that led to its inclusion in Oxford Online Dictionary in August. 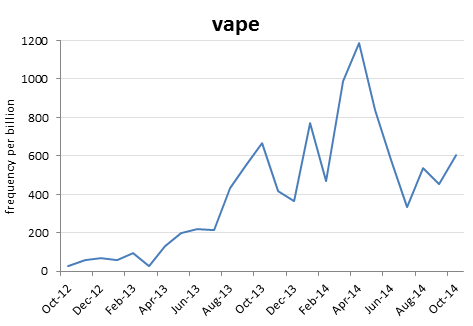 n. a term of endearment for one’s romantic partner.

n. a person whose job is to serve customers in a cannabis dispensary or shop

n. a trend in which ordinary, unfashionable clothing is worn as a deliberate fashion statement.

n. informal, Actions performed via the Internet in support of a political or social cause but regarded as requiring little time or involvement, e.g. signing an online petition or joining a campaign group on a social media website.

adj. relating to or involving technologies that allow a smart card, mobile phone, etc. to contact wirelessly to an electronic reader, typically in order to make a payment.