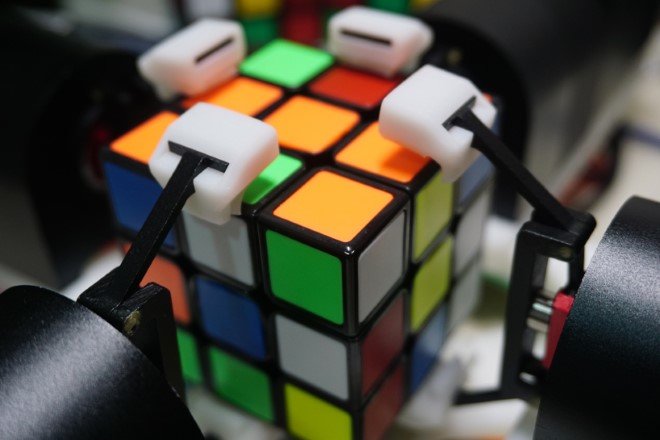 The fastest time for solving a Rubik’s cube is 6.54 seconds. However, Mike Thomas has built a quad arm robot that can solve it in merely three seconds!

Incepted in China, this high-speed robot took Thomas about three years to finish designing. Its operating mechanism works differently than the robot presented by two MIT students that could solve the Rubik’s cube in just 0.38 seconds. If there’s already a robot that can solve the cube in groundbreaking time, then what’s so special about Thomas’s machine?

SEE ALSO: GoCube is a bluetooth-connected Rubik’s cube to let you compete online

Well, what makes it stand out is that one can easily place and take out the cube from the contraption. Furthermore, the robot uses claws similar to human hands to grab and solve it. Even more compelling is the fact that the creator designed and manufactured almost all components himself. He carried out the construction process by building the high-speed motor first. The next steps included construction of the machine, optimizing it for the algorithm, programming the motor’s PCB and main controller, and debugging and tuning the robot.

These wireless bluetooth speakers are made from recycled…

These illustrations will show you how phone-absorbed people…

Thomas also addressed his concerns in a statement, “when increasing the speed, something we don’t see in daily life starts to emerge. When performing a whole cube turn, both sides of the face are breaking so hard due to high speed, while the middle layer continues to roll due to inertia, which I call flying edge,” he noted. “To solve this problem I need to tighten the screws of the cube in order to give more friction to the middle layer, however, this will significantly increase the time to turn the side faces. So there is still potential to shorten the time as soon as I solve this problem.”

Hopefully Thomas will be able to carry out the steps required, that will make his machine more efficient and revolutionary.

Charge your gadgets on the go with this revolutionary backpack