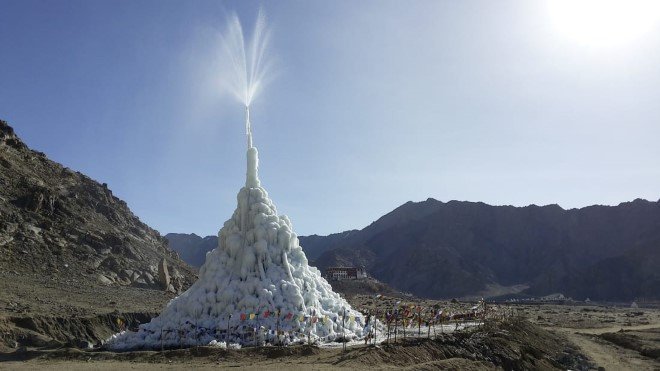 Global warming continues to take its toll on major parts of the world. With rain already scarce in the cold desert of the Ladakh region of northern India, global warming has made farmland irrigation almost impossible. The shrinking glaciers also restrict the amount of water flowing into the region.

However, one mastermind has the solution to the problem: create more glaciers. In 2014, a local mechanical engineer, Sonam Wangchuk, presented the simple idea of collecting the water from melting snow and ice in the cold months that are already bound to waste, and store it for spring months when the farmers require it for irrigation.

“I once saw ice under a bridge in May and understood that it’s the sun that makes the ice melt, not ambient temperature,” he told CNN. “I realized that ice can last a long time, even at low altitudes.”

This basic physics concept led him to build a two-story model of a cone of ice called it the “Ice Stupa”-named after those ancient mound-like sacred monuments spread out over Asia. 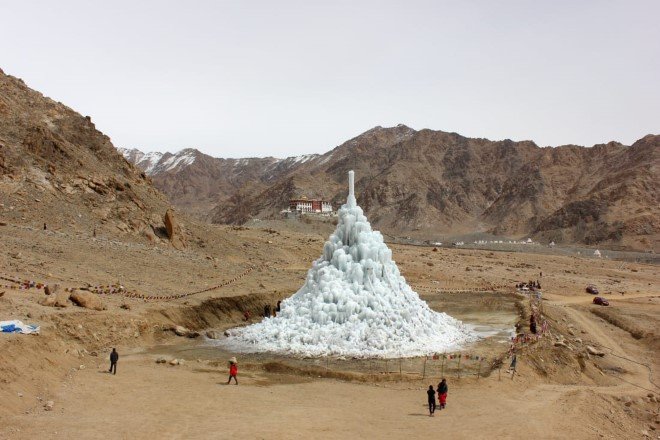 So, how does the cone actually work? According to Wangchuk, three basic components are involved: an upstream, a downstream and a gradient. The first step of construction includes laying down a pipe underground to connect a stream of water with the probable location of an ice stupa. The stupa requires that the water come from a higher altitude, preferable 60 meters or more. Since, basic science says that a fluid in a system maintains its level, so water coming from 60 meters above will splatter 60 meters in the air out of the downstream pipe in the form of a fountain. 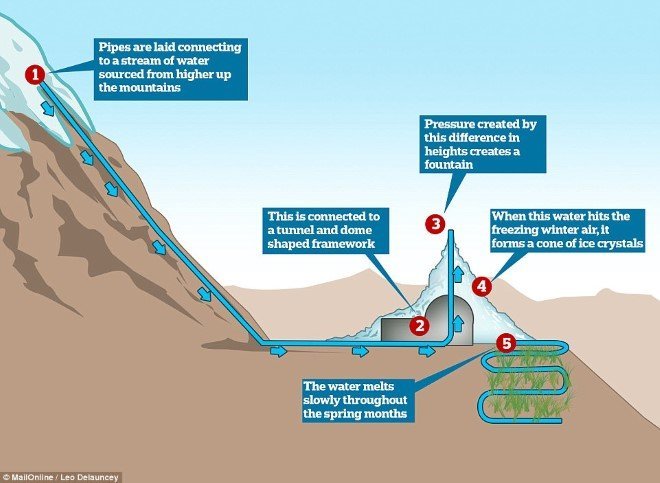 This case turns your apple watch into an iPod. Almost!

This ring will save you from death… literally!

The rest is done by the below freezing air temperature which immediately freezes the water drops into ice that drops to the ground, forming a cone. Wangchuk claims that, the cone should have a minimal exposed surface area for all the water inside it. This will cause it to melt very slowly and cause it to act like a glacier.

The 20 feet tall prototype works in a similar fashion. Containing over 150,000 liters of water, it was able to last from winter until mid-May when the water is required for irrigation and while all the surrounding ice had disappeared, the Ice Stupa remained.

Despite its simple construction, the ice stupa might require complicated maintenance. “Currently they need a lot of manual intervention: the fountains can freeze when the pipes ice up, things like that,” says Wangchuk. However, with advanced technological methods, the stupa maintenance might become easier. He plans to test his ice stupa to perfection in Peru, taking advantage of the freezing temperature present there.

The main question is that how much it even costs to build a stupa. According to its maker, initial investment costs are high because of the piping that needs to be laid out. He estimates the costs to be around $125,000 for a full-scale version that would reach 80 feet in height and provide irrigation to 10 hectares of land. Knowing this is too high of a cost for the government to fund, he decided to kick-start his project using crowd funding through Indiegogo. His campaign turned out to be successful and even gained attention from local institutions, meaning the Ladhaki government now plans to add this idea into its development plans.

Although it’s merely a drop in the ocean, it seems that one person can affect the lives of many.