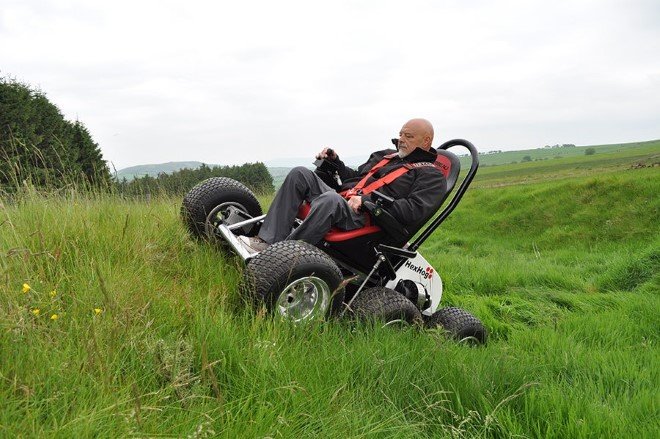 While it is true that wheelchairs have changed the lives of those who are physically challenged, they still have certain limitations. For instance, wheelchairs do not allow users to travel off-road. Such was the case reported by a member of a farming family who could not access all of his agricultural lands safely due to the rugged terrain. Upon hearing about this issue, Mr. Sion Pierce, a Welsh engineer, invented the HexHog. He tested it in the harsh terrain of North Wales in the United Kingdom, and after five years of blood and sweat, he finally succeeded!

The HexHog weighs 606 pounds, and stands at a height of 1.2 meters making it easily transportable by a small trailer. It has a maximum speed of 8.5 miles per hour and fully charges in just two and a half hours! The wheelchair is an all-electric ATV (short for all-terrain vehicle) with six wheels. It consists of a lithium-ion battery and two motors powering each of the six wheels. Flexible chassis and 10-inch wide wheels provide maximum traction across bumpy surfaces that allows the wheelchair to go almost anywhere. According to Mr. Pierce, ‘You can’t take the HexHog into supermarkets, but you can cross moorland, farmland or even peat bogs.’ 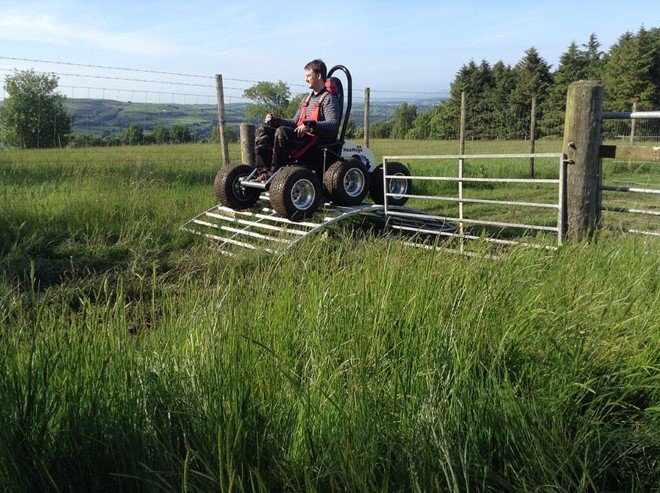 No Time to Weight Around

It’s pretty simple to operate. The wheelchair has a joystick, along with a control system that allows the user to adjust his seat according to his own comfort level. Similarly, one doesn’t have to rely on anyone for loading the HexHog on the trailer as he can do it with a remote control! Moreover, one can even drive it on the road like a normal car by buying an additional kit, provided they have a standard car license (yup, that’s how seriously they take the HexHog in the UK). As for the price, the HexHog costs $30,200 to $42,000.

Taking into consideration the issue of noise and air pollution, Mr. Pierce used a battery that allows the wheelchair to cover a distance of up to 20 miles! He is more than pleased with his invention as he said, ‘The HexHog is a mobility device that provides the next level up in accessibility for wheelchair users who need to access rougher areas for their work or leisure without risk of becoming stranded. Wheelchair users can independently access areas they couldn’t before.’