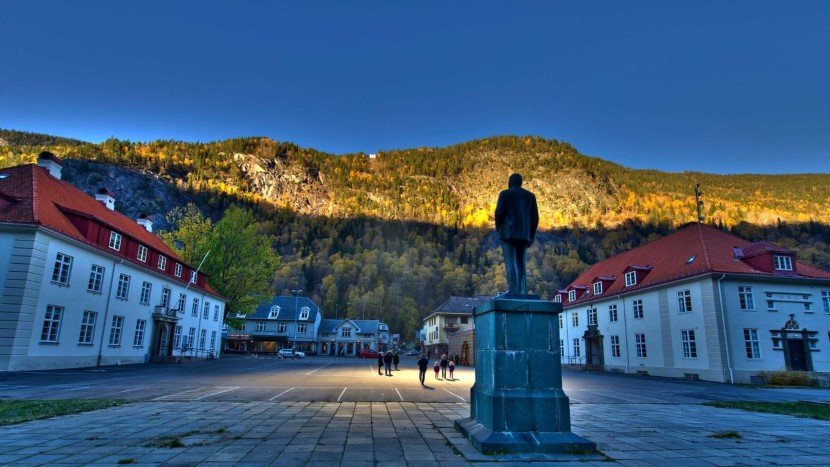 What would it be like to live in shade for more than half a year, every year? The word we are looking for is “Gloomy”. Exactly, living without direct sunlight for such a long period of year is a nightmare in a Norwegian town known as Rjukan. The solution for this problem was sought in the improbable way of installing giant mirrors.

No sunlight for Norwegian Rjukan Town for straight 6 months

The town of Rjukan in Norway is deprived of sunlight for about 6 months every year simply because it is located in the middle of mountains and they cast a shadow over it. This town lies far south of another similar case where sun doesn’t shine from November to January straight. That town is known as Tromsø and it is located about 200 miles north of arctic circle.

Giant mirrors to the rescue

However, the people of Rjukan managed to cast themselves a portion of sunlight by installing giant mirrors about 1476 ft above the ground on the mountains where there is direct sunlight access. The mirrors are computer controlled and are adjusted every 10 seconds to maintain its synchronicity with the sun. Using these mirrors the sunlight is provided to the town hall where people gather to enjoy it in their otherwise dark lives.

The idea behind installing such huge mirrors to cater for the light problem was presented by an artist Martin Anderson who moved to town and couldn’t live with the sun-less situation. The mirrors were then installed in 2013 and the total cost of the project was around $ 800,000 which is believed to be a great investment as it changed the town and its people’s lives forever.

It is known that the original presenter of the mirror idea was a former Rjukan resident, Engineer Sam Eyde, who orchestrated a plan to install reflective mirrors so that the people of the town could enjoy at least some of the daylight but of course due to the limitations in technology back in the day, the idea could not be executed. Instead the famous engineer built a cable car for the town people because of course, if the sunlight cannot reach them, they can always reach the sunlight.

Little sunlight is better than none

The area of the mirrors installed in Rjukan is about 538 square feet but the area of the town that it illuminates is 2150 square feet. It is not much but it sure is better than complete shade throughout 6 months span of the year.

The idea, however, was opposed by some of the people who considered it to be a huge waste of money but later came to realize its importance as now the town of Rjukan is recognized as a prominent tourist destination where people from across the globe come to take a look at the mirror-lit town.