According to the latest details, Ford F-150 is getting new renders since the newest images are the best that have yet been unveiled on the electric pickup truck. On the basis of the old images of the Ford F-150 and with the new tweaks that were introduced into the model, it looks quite like an EV but there is no guarantee if this will be the final form in which the company will introduce the pickup truck in the market.

The creators of the render, F-150 Gen 14 spoke about the model as, ‘You’ve seen the spy photos of the partially exposed 2021 F-150, but now we’re bringing you the full undressed version, thanks to our inside sources who have seen the fiberglass mockup‘.

They also added, ‘The evolutionary design nevertheless brings about many stylistic changes, notably, the 14th generation F-150 will have a grille that removes the large parallel slats that bisect the entire front end of the current truck for a cleaned-up, more open grille providing better ventilation and aerodynamics. The lighting elements have also been updated to provide a more refined, integrated design that eschews the oddly-shaped lego blocks of the current front headlights’ 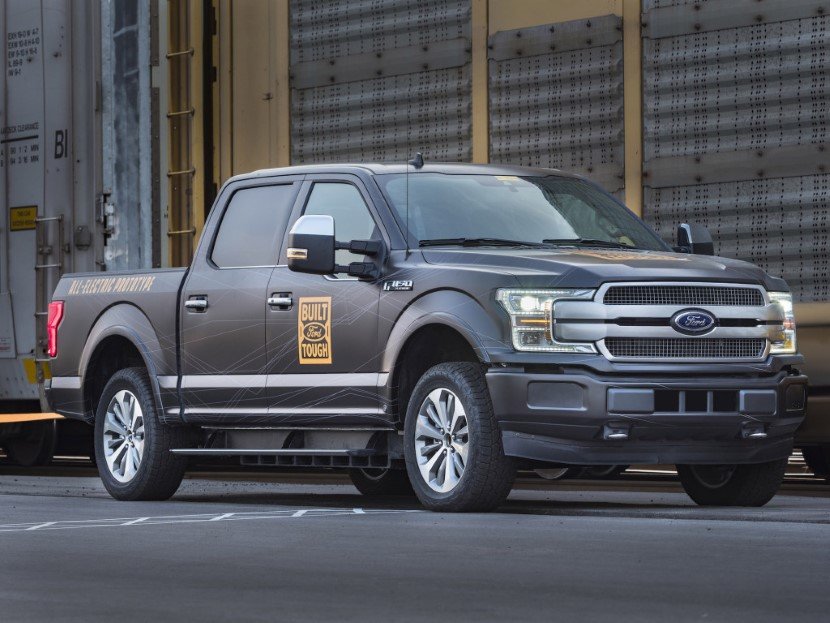 Debut of the Ford Electric Truck

The electric Ford F-150 is debuted to launch somewhere in 2022. It is said to be a follow up of the Blue Ovals and its launch is going to be an electric crossover with Mustang tinged-styling. In 2018, Ford announced a release of a ’16 battery-electric vehicles’ to the market which was to initiate with the release of an all-electric SUV with a range of 300 miles and it is now known as the Mustang Mach-E. Despite the launch of the SUV, the company was still much more invested in the manufacture of hybrids than electric cars. The company confirmed that an investment of more than $11.50 billion was made to the global electrified vehicle investment of which this vehicle is a part of.

Initially, the F-150 was only going to be a hybrid power train by 2020 but last year the company announced that they will also be all-electric version of the F-150 to the market. They also unveiled a prototype version of the truck that pulled over 1 million lbs of train carts. The train carts were filled with 42 gas-powered F-150s. 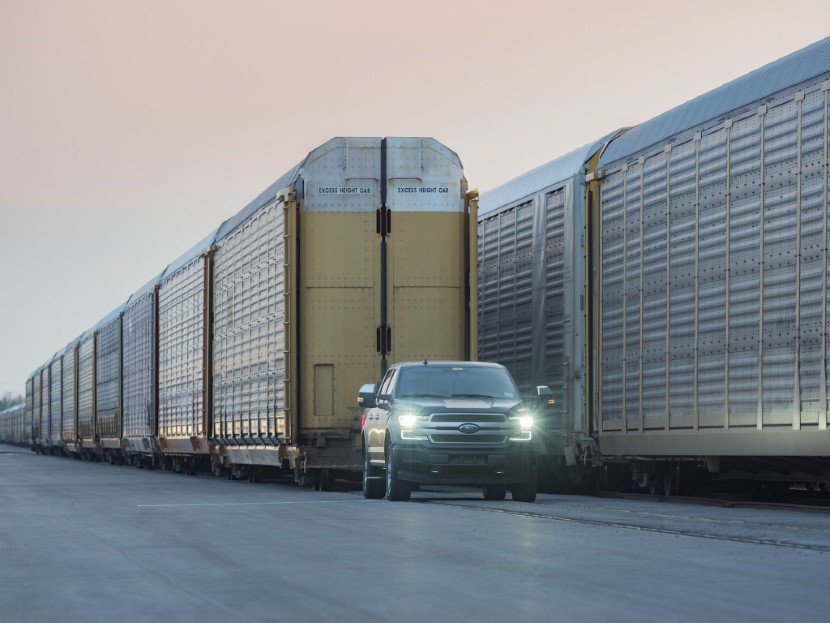 The prototype seems to be carrying around 10 double-decker rail cars being over 1,000 feet. According to the latest news, the product launch will be in just two years’ time in 2022 and until then there might still be a few changes as to how the electric pickup truck might look like but for now, according to some news, we might have a clearer picture of what the F-150 pickup truck might end up looking like.

A new manufacturing plant called the Rouge Electric Vehicle Centre is being built to facilitate the manufacture of the electric car in Dearborn, Michigan. With an investment of $700 million, this plant will host production for both the electric F-150 as well as the F-150 PowerBoost Hybrid. This facility alone is expected to create 300 more jobs in battery assembly and production for the two new Ford cars.

In addition to this, Ford plans to add 2,700 more jobs in a time span of three years in Wayne, Michigan for the manufacture of trucks such as the Bronco but also as part of a new “modification center to support autonomous vehicles and other vehicles.”

The year 2021 would render as a busy year of electric truck launches, Recently GM CEO Mary Barra confirmed that they will be launching their electric truck in 2021. The Rivian R1T is also scheduled to go into production soon but the marketing of it will be delayed till 2021 and by now we all know that Tesla’s Cybertruck is also scheduled for late 2021.

The video below shows the electric F-150’s prototype towing one million pounds worth of weight.

With the help of some spy shots from Michigan, a test mule under development is seen. With the looks of it, it is much like any other truck but a bit more spacious under the ride height to put in batteries underneath the cab. The manufacturers typically bundle EV batteries in a single, large pack and they are then installed into the cabin of the vehicle. Ford’s new technique of placing the batteries at the cross-members that are located in the truck’s frame rails, permits the batteries to be equally distributed as well as provides additional support to the frame rails.

The technique exhibits a much stronger and viable vehicle that can occupy a large number of batteries depending on the length of the vehicle as more cross-members are easily harvested into it. The patent application of Ford also describes a much higher reduction in the NVH (noise, vibration, and harshness) as the traditional battery packs provide pathways for the NVH. In Dearborn, where the electrified F-150 versions will be built, Ford says that it’s planning to assemble battery cells into battery packs for both the F-150 hybrid and the F-150 electric pickup.

The truck is expected to be AWD and to be the most fast in the line. Electric motors are known to boost a ton of power from typically zero RPM but the power figures of the electric truck are still unknown but it is assumed that the numbers will be similar to that of the metrics released for the Rivian R1T.

Features of the Ford Electric Truck

Ford has recently released additional information regarding the features of the battery-powered F-150. They are as follows:

Range of the Ford Electric Truck

The company has yet to disclose a set in stone range for the electric truck but according to them, anything below a number of 300 miles would be an utter disappointment for them as they are expecting much larger numbers than that claiming that it should not be a challenge for the electric truck to cross it. Ford said that F-150 is likely to give a far greater range than the Mustang-inspired SUV. 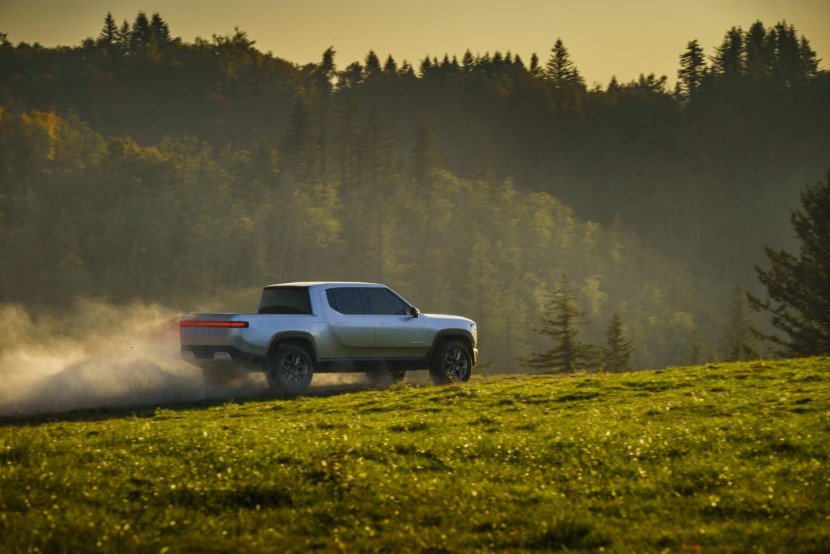 There is no final word on the price of the electric F-150 but it is no mystery that pickup trucks are already quite exorbitant let alone an all-electric Ford pickup truck. The estimates for the cost of the truck are around $100,000 which would be a starting price.

The truck is scheduled for the unveiling in 2022 and by then there might be some tweaks and changes to the original design. As of now, the images seen are just the prototype and the company has yet to give a final show with their final designs and plan of the electric pickup truck.

In addition to the Electric F-150, a hybrid version is also a part of the F-150 lineup. It is scheduled to released in 2021, and will be Ford’s first ever hybrid truck. The video below shows the prototype go through extensive testing to ensure that it’s Built Ford Tough, similar to the electric version of the truck.

The overall take of Electrek on the Ford F-150 was, ‘I like it. It’s kind of the anti-Tesla Cybertruck. It’s electric but it looks like a regular pickup truck. Now it won’t be great for aerodynamic performance, which means it won’t be great for efficiency and that Ford is going to have to put a lot of batteries in there to get a decent range. It will be interesting to see how Ford handles this problem and how it’s going to affect the cost.’