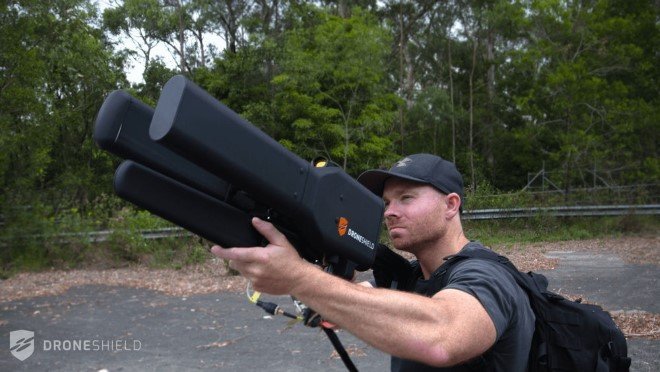 Drones have brought nothing but terror. Unfortunately, they have gained immense popularity within terrorist organizations as well as military forces of various countries. On one hand, you have terrorist groups converting these drones into vehicles for dropping hand grenades, whereas on the other hand you have anti-drone technologies being invented.

So, what’s the latest invention? The DroneGun. It is a product of the US and Australian firm called the DroneShield, weighs six kilograms and has the ability to disable drones at a range of 2 kilometers i.e. 1.2 miles. The purpose of the DroneGun is to keep the people safe from drones that carry weapons and explosives by diverting and landing them safely. According to their website, ‘it allows for a controlled management of drone payload, such as explosives, with no damage to common drone models or the surrounding environment due to the drones generally responding via a vertical controlled landing on the spot, or returning back to the starting point (assisting to track the operator).’

An Italian village is selling hundreds of homes for just…

Moreover, the DroneGun is also able to jam the signals across the 2.4 and 5.8 GHz frequencies. It can even block the GPS and GLONASS, however, it is not yet allowed in the United States of America. And it can only be sold once it is approved and authorized by the FCC i.e. Federal Communications Commission.

The DroneGun isn’t the first anti-drone technology, researchers at Michigan Tech University build a drone with a net that could entangle another drone carrying weapons or explosives. This way, the explosives could be carried to a far-off place, eliminating the imminent threat.

Many nations around the world have shown an interest in the DroneGun, as in January 2017, Swiss police used it at the World Economic Forum in Davos. The Swiss police agency, Graubünden, possessed the gun in order to save significant political leaders and guests at the event. They said that, ‘DroneGun was selected as part of a rigorous testing process, where the customer was looking for a non-destructive yet highly effective solution for the protection of the security and privacy of the high-profile delegates.’

Will this DroneGun take away our existing fear? Only time will tell.