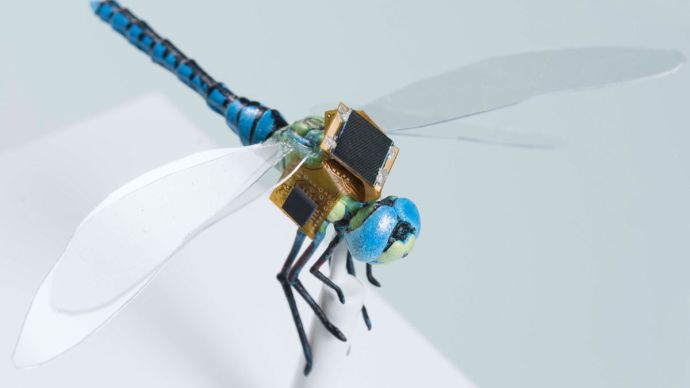 With the advancements in robotics thanks to high performance hardware and efficient control algorithms, minimizing the size of robotic machines especially drones has become a major challenge as its application areas are augmenting day by day. Miniaturization of electronics is no big deal, but as the drone’s size decreases, so does the battery life. So, scientist turned their focus on insects to study how these insects tackle with energy demand required to fly.

Following this concept, a team of researchers at Charles Stark Draper Laboratory and Howard Hughes Medical Institute decided to take their research up a notch and mutated a living insect into a drone instead of creating an insect like drone. These researchers have developed an immensely futuristic remotely controlled cyborg drone that goes with the name: DragonflEye.

DragonflEye was manufactured upon the concept of optogenetics i.e. inserting the ‘steering neurons’ into fly’s spinal cord which are light sensitive. Dragonfly’s eye consists of tiny optical-fiber structure which send light pulses at certain wavelength to their brain enabling the controller to monitor and control its functionality or path remotely. It also contains a tiny backpack which contains sensors and miniscule solar panel to resolve the battery issue. To aphorize its functionality, the researchers will be able to track and steer the dragonfly and collect data by means of sensors from those habitats which are too dangerous for humans to visit.

Its foremost feature would probably be its steering mechanism, I mean genetically modifying a living organism to manipulate its neuro-signaling with sub-millimeter precision without affecting the nearby neurons is just amazing.

At present, dragonfly moves in straight line, but work on its steering mechanism is being done. Once it is perfected, its applications can be numerous. It can be used as a tiny spy device. But of all, if scientists get successful in this area, the idea of genetic modification can then be applied to humans’, genetic alteration for paralyzed patients to reestablish their movement ability.