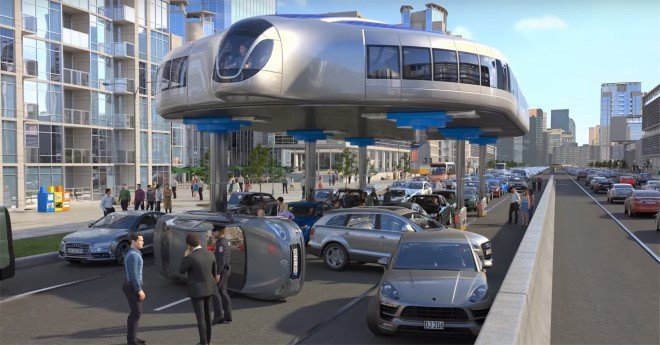 With the ever increasing population and subsequent traffic congestion, there is no doubt that we need better modes to commute.

This modern day transportation system will include pods suspended in air using six pillars, which also offer more mobility. Furthermore, the idea fits perfectly in the current arrangements of cities, hence requiring no remodeling. The supports will also stay out of the way of regular traffic. In addition, the pillars have inbuilt drive and sensors to identify and adapt to urban traffic, which will also aid in maneuvering through it. The sensors will also allow the pods to navigate the varying radii and curvatures of the roads and avoid collision with traffic. It will also adjust its height whenever a hindrance-such as a bridge-is nearby.

Nikola has announced a Hybrid Pickup Truck Equipped with a…

With each pod having a whopping 200 seats to cater to passengers, it might help solve our public transportation issues as well. If this weren’t ideal enough, environmentalists would be delighted to know that instead of fuel, the carriages run by solar energy, with solar panels charging batteries to commute from one charge to another.

Let’s hope the company’s vision turns into a reality one day!