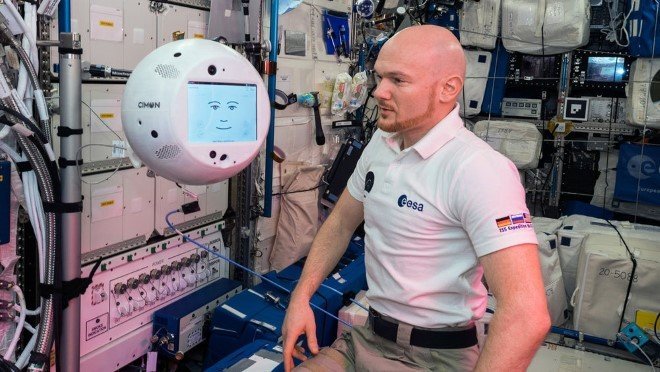 A first-of-its-kind robotic helper puts its conversational skills to the test at the International Space Station (ISS) and has completed its first day on the job. The CIMON assistance system was powered up by the European Space Agency (ESA) astronaut Alexander Gerst.

CIMON stands for Crew Interactive Mobile Companion. It is a 3D printed plastic sphere and is of the size of a medicine ball. It is built by Airbus for DLR, German Aerospace Center, and to enhance it with AI capabilities it is equipped with software by IBM Watson. The free-flying robot, CIMON, floats around the ISS and provides support to the astronauts with their routine tasks. It will be their companion on-board and will also help them to relieve stress.

Gerst carried out his first interaction last month when the robot was fired up. The session with the robot lasted for 90 minutes. The astronaut ask the CIMON to wake up, asks its name, where it belongs to, and also having it play his favorite song by German band Kraftwerk, known as “Machine Man.”

This is what the painted numbers on the runway signify

It also shows its other features by going beyond the small talk. CIMON tests its ultrasonic sensors, displays and speaks out instructions for a crystallization experiment, and also streams a video utilizing its front-facing cameras. This session was intended to display its ability that how the flying robot will assist crew members in a variety of ways.

CIMON project Manager at DLR, Dr. Christian Karrasch believes that it is an incredible and fantastic feeling to be able to experience CIMON actually understanding seeing, hearing, and speaking. The first real deployment of CIMON in space had made a new chapter in the Aerospace History as it marks a new start of what hopefully be a longer deployment on the ISS. Truly fascinated by the interactions with the Artificial Intelligence (AI), he declared CIMON as the only one of its kind designed specifically for deployment on the International Space Station (ISS). He said that “We are entering uncharted territory and pushing the boundaries of technological expertise in Germany.”