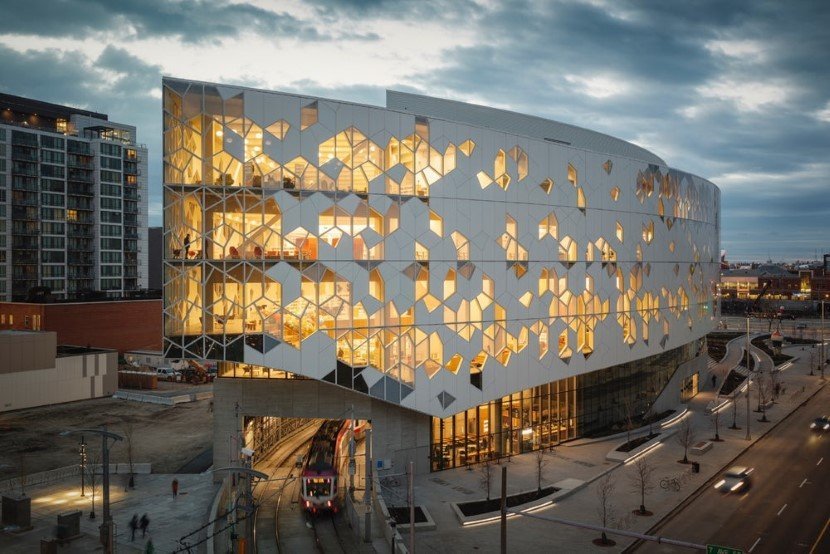 One of the largest library systems on the continent, the Calgary Central Library is a work of international architectural firm Snøhetta and North America-based multidisciplinary design firm DIALOG. The Library features an energy-efficient triple-glazed facade comprising of a hexagonal pattern of fritted glass and aluminum panels. The fritted glass cutouts provide views into the building from afar. 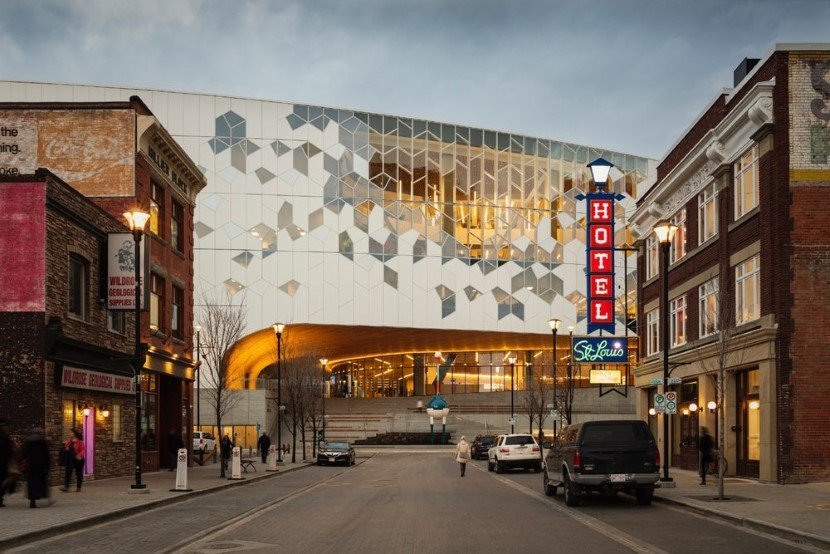 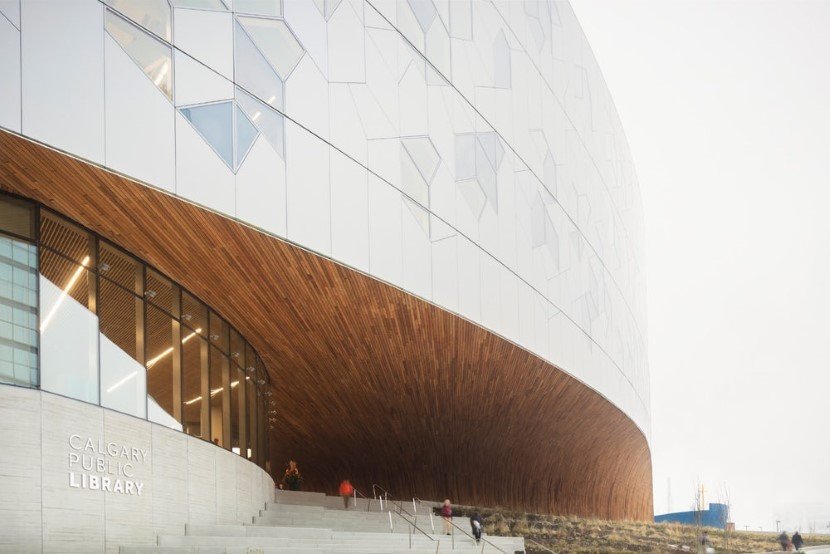 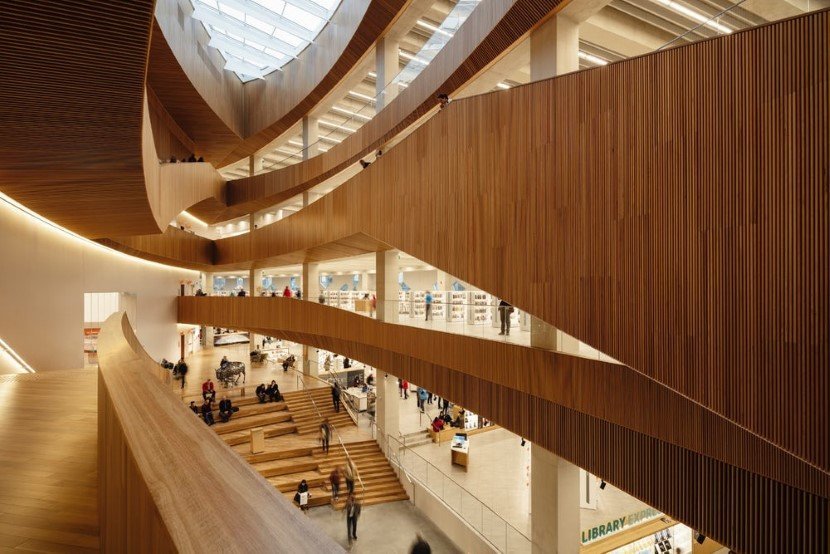 Situated in downtown Calgary, the library is elevated above the Light Rail Transit Line providing 240,000 square feet of extended facilities in a contemporary and light-filled environment for the visitors.

The striking timber-lined atrium impresses the visitors because of its double-curved shell which is created from planks of western red cedar. By passing through a large wood archway, visitors enter the main atrium that is topped by a decorative oculus. “Wood slats line the perimeter of the open atrium, shaped in plan like a pointed ellipse, serving as an orientation device for people to quickly grasp the circulation and organizational logic of the library,” says Snøhetta. “Inside, the concrete structure is left exposed and unfinished, hinting at the open-ended possibilities within.” 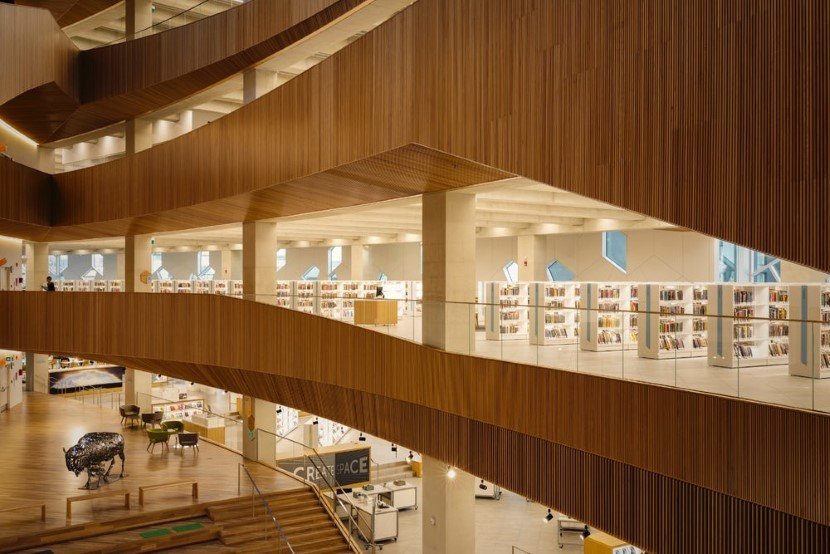 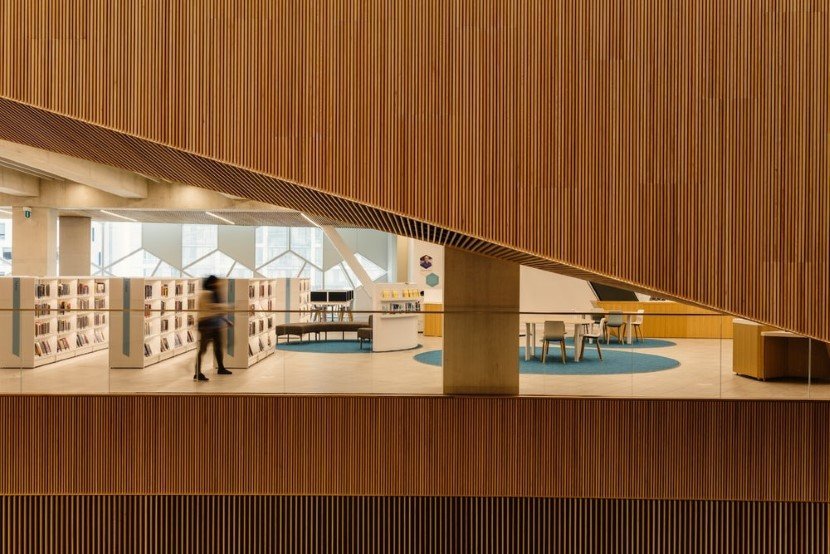 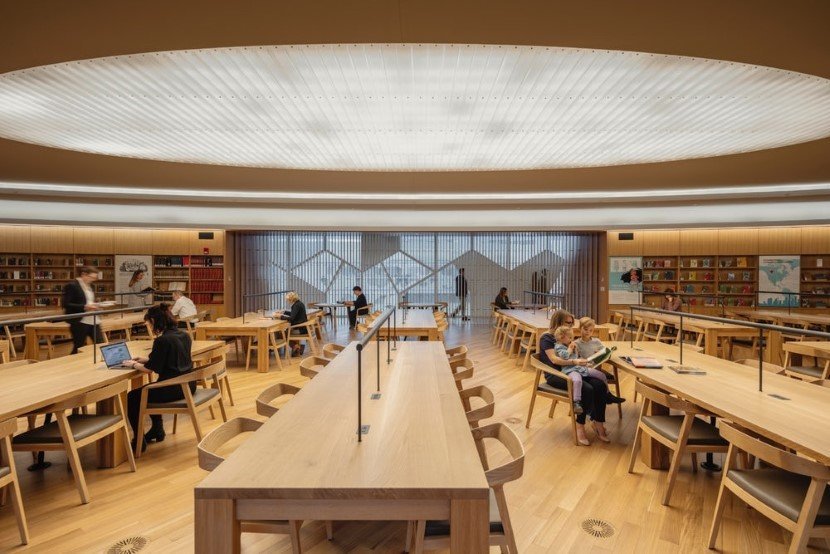 Inside the library there are six floors lined with wood throughout. The material palette is a mixture of glass, wood and concrete which is impressively done ensuring lots of sunlight through the glazed facade. The floorplan is laid out in such a way that the lower floors are for louder activities and the quieter study areas are on the upper floors. A children’s area with playhouses and books is also on the lower floor. 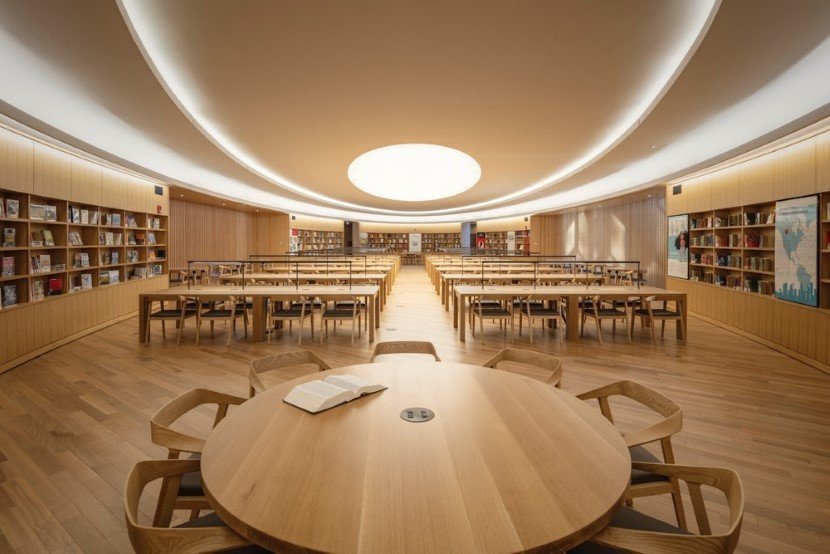 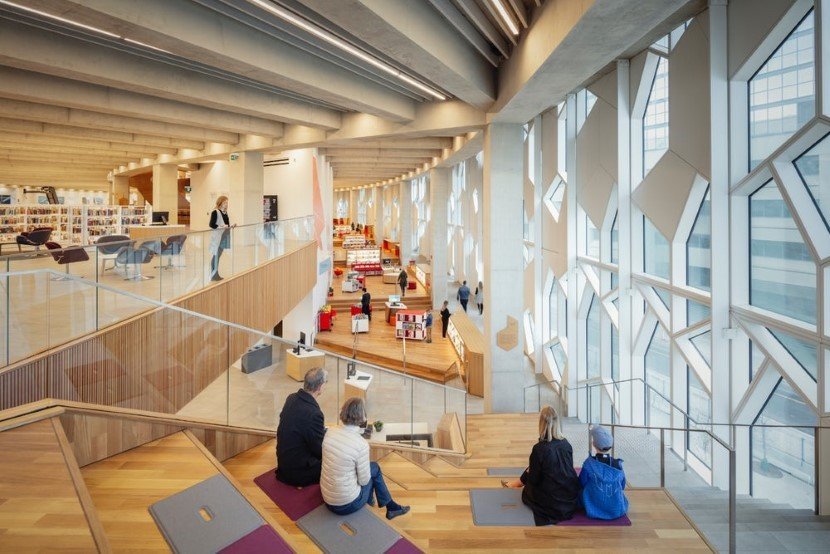 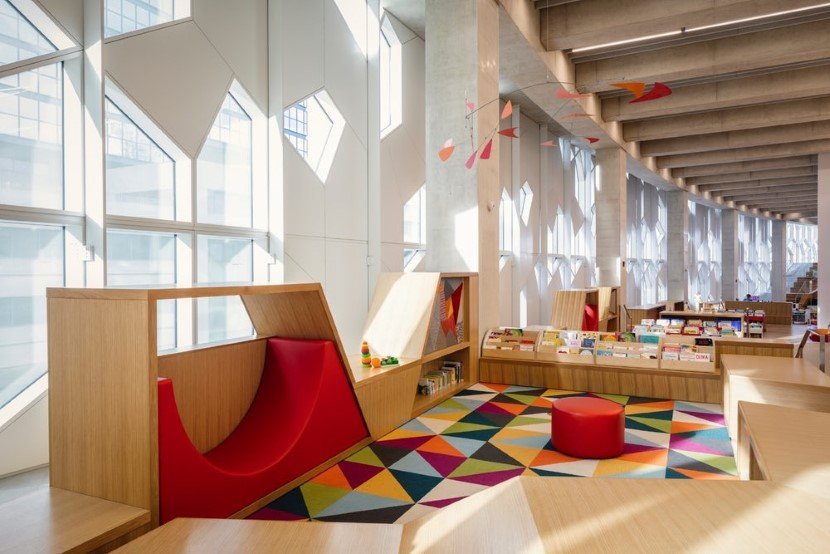 10 Of The World’s Magnificent and Mesmerising Caves You’d…

French artist made our summer dream come true with a mobile…

A café facing the light rail track is in the northernmost point of the library where the visitors can sip their drinks and watch train pass below.

The Library’s design was chosen in 2013 and it opened the doors to the public on Nov 1, 2018. It is likely to offer a strengthened role as a public gathering space welcoming over twice as many annual visitors. To facilitate public gathering, the outdoor landscape has been designed with outdoor amphitheaters and an entry plaza. 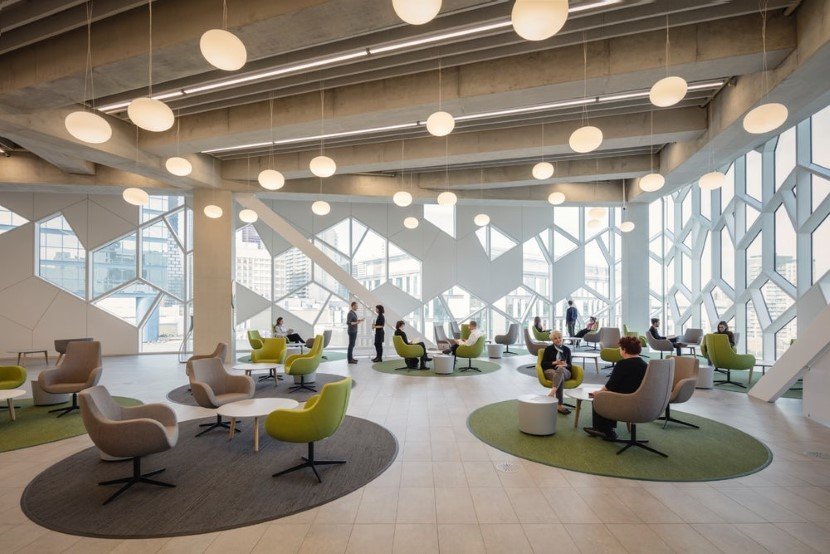 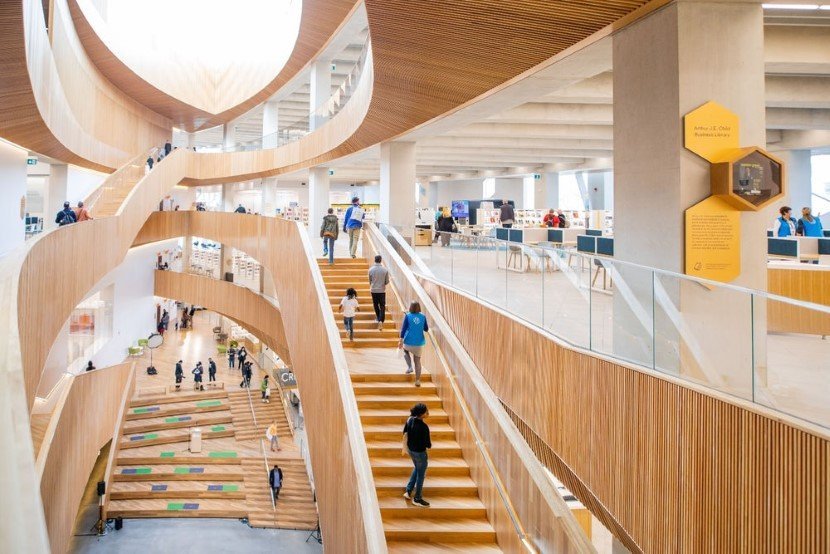 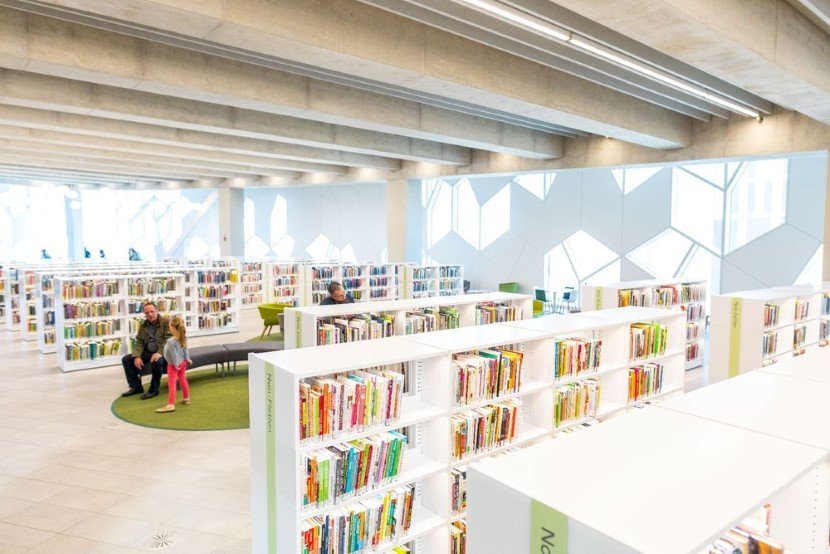 The total cost for the project was $245 million CAD (roughly US$187 million), the largest public investment of the city since the 1988 Olympics! 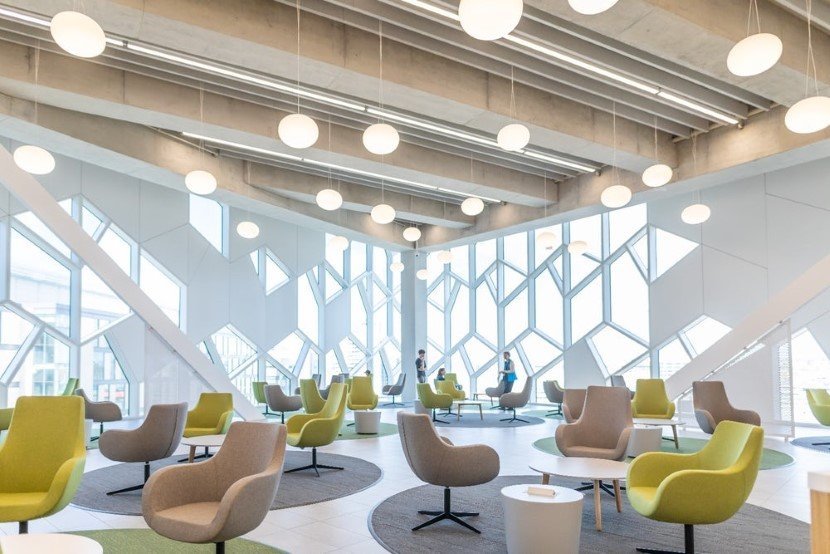 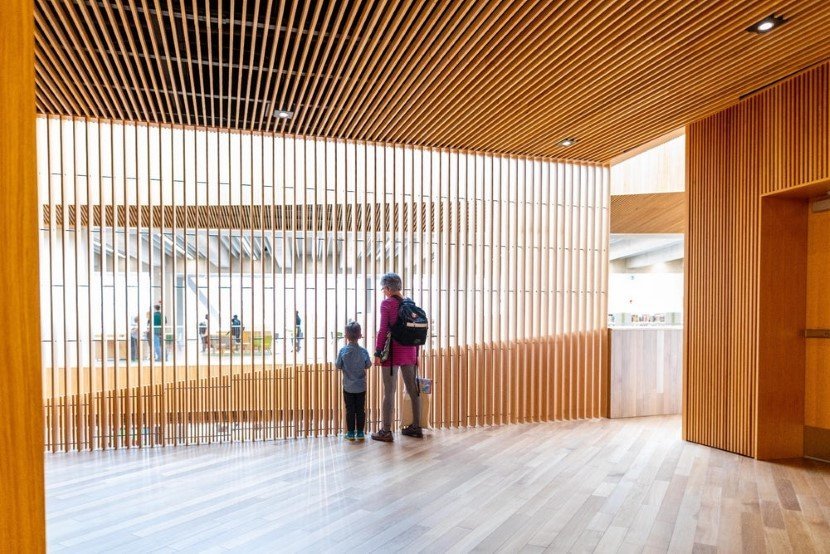 All Images: © Michael Grimm via Snøhetta