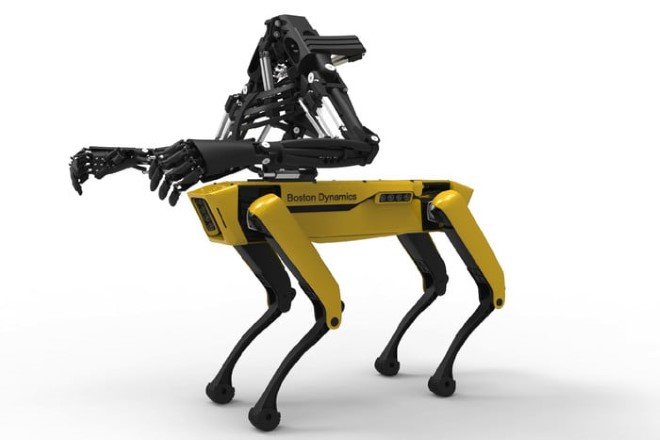 Boston Dynamics Spot is a cutting-edge robot released recently by the cutting-edge robotics firm . Since then, everybody has been impressed with its abilities and robust nature to open doors and walk upstairs. It recently got an upgrade and has now a pair of 3D printed bionic arms. The Boston dynamics did not officially sanction the update, but in fact, an Italian Startup Youbionic performed it to promote its robot-controlled 3D-printed bionic arms.

The purpose of this 3D printed device is to make the life of users easier by helping them in performing tasks either independently or via a remote control. To perfectly integrate it in the user’s lifestyle, the size or functionality of the device can be personalized by customizing and modifying the STL files before 3D printing. Youbionic has partnered with Boston Dynamics to signify the level of personalization that can be achieved with the 3D printed device. The result is an all-robot hybrid version, which is half-animal and half-human that is known as SpotMini robot dog.

Like Boston Dynamics Spot, Youbionic began working in 2014 on its bionic prosthetic hand, and over the years their project has evolved from version to version. The Italian startup started with a plastic hand that was attached to an electric switchboard, and then it evolved into a pair of hands, a working arm, and, now a pair of arms with a robotic spine and the top part of a ribcage. The creator of Youbionic, Engineer Federico Ciccarese, aims to build a complete humanoid.

This Stackable Tetris LED Lamp Is Fun Yet Very Functional!

The Boston Dynamics Spot robot dog weighs 25kg. It can carry a payload of 14 kg and has 17 joints in total. It includes a 3D vision system and depending upon the use of the device it roughly has 90 minutes of charge. Its new characteristics include a perception sensor suite with the attributes of stereo and depth cameras it helps with mobile navigation and manipulation.

Boston Dynamics will start selling the SpotMini in 2019. It will be the first time in history that the company will sell its robots to the general public. If someone is interested in 3D printing the Youbionic One arms, the STL files are available for $179 on the company’s website.