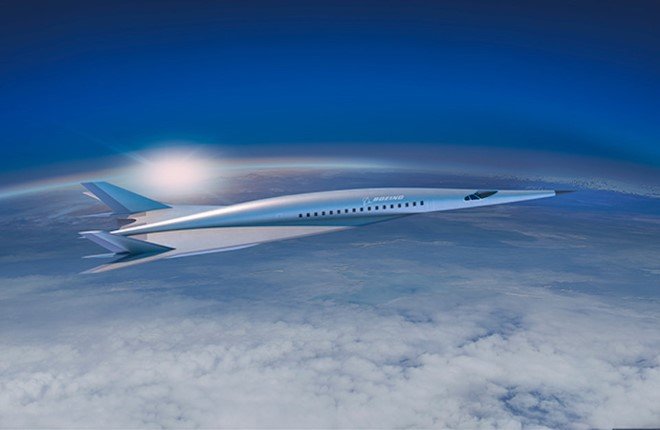 Traveling from London to New York means long distances and a lot of time. However, Boeing wishes to change that and bring down travel time from a hectic seven hours to a mere two hours!

Boeing introduced the design for their hypersonic passenger jet during the American Institute of Aeronautics and Astronautics (AIAA) conference in Atlanta. They aim to provide the plane with a top speed of 6,174 kmh (3,836 mph), which is almost five times the speed of sound as it flies at a height of 95,000 feet! This means it will be 2.5 times faster and 30,000 feet higher than a Concorde.

However, it’s still in its initial stages of design. According to the company, they still need to tackle the technical issues before presenting a prototype. Boeing spokesperson Brianna Jackson says that it will take almost 20 to 30 years before the hypersonic jet becomes a reality.

This passenger-carrying hypersonic vehicle could one day be a reality. Building the future here at Boeing means looking decades ahead at what’s possible and innovating now to make it happen. https://t.co/sIG4Bp1vY8 https://t.co/CcMGiUoLeK

Chameleon Pens Give Depth To Drawings With Their Stunning…

“Developments takes years to complete, and even more so with a technology that requires additional testing and refinement as we work to understand how it might fit into the market place,” she said.

Moreover, the purpose and intent of the vehicle is not limited to passenger utilization; Boeing anticipates that the hypersonic technology could have military and commercial uses as well.

So how will the company design their new plane to reach such high speeds? Boeing’s senior Technician Kevin Bowcutt plans on utilizing a special kind of engine called the “ramjet”, which is the main component of many types of hypersonic vehicles. The overall structure of the jet will also be aerodynamic, where the sharp front portion will reduce drag and increase lift.

Boeing isn’t the only one in the market aiming for hypersonic speeds. Companies like Lockheed Martin and Aerion Corporation are also on their way to develop hypersonic crafts. However, these are simply plans and dates of production are still unknown to the masses.