BMW has finally unveiled the iNext version of electric SUV, ‘BMW iX’. The production is still to initiate in the middle of 2021 and the actual release date would be somewhere at the end of 2021.

One of the most prominent features of the BMW iX is the remarkable 300 miles of range it offers. The German automaker describes, “The exterior of the BMW iX represents a distinctive re-imagining of the powerful proportions of a large BMW SAV. The BMW iX is comparable with the BMW X5 in length and width and is almost the same height as the BMW X6 on account of its flowing roofline. The size of its wheels, meanwhile, brings to mind the BMW X7.”

The SUV is fitted with a giant battery that has the ability to power full-blown motors with a total 370 kW/500 hp capacity, resulting in a 0 to 100 km/h (62 mph) acceleration in under 5.0 seconds. BMW says that the iX will be equipped with “a gross energy content of more than 100 kWh”. The automaker believes that the battery will enable a range of “more than 600 km based on the WLTP cycle” and “more than 300 miles, according to the EPA’s FTP-75 test procedure.” BMW has designed the BMW IS to have a fast DC charge which can go up to 200kW, which means it can go from 10-80% charge in about 40 minutes. 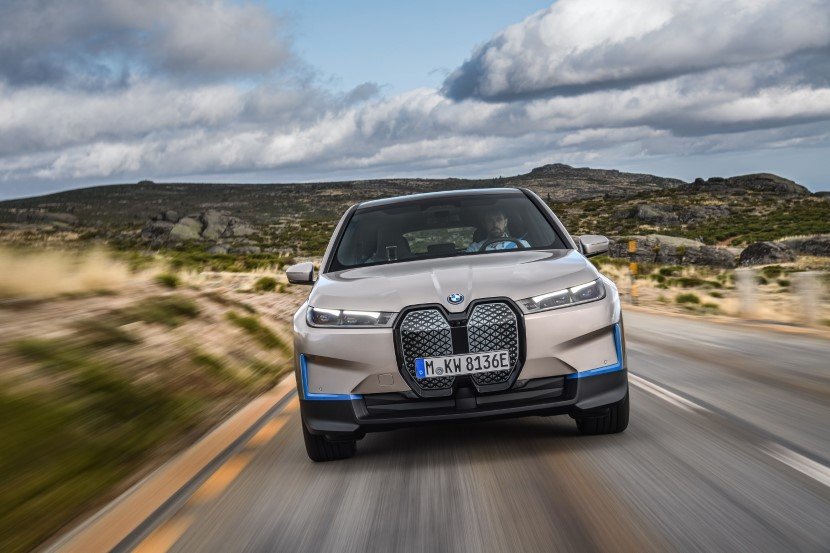 BMW iX is to be equipped with the eDrive technology which involves two electric motors, power electronics, and the charging technology of the high-voltage battery. According to the latest calculations, the power unit developed by the BMW Group has a maximum output of more than 370 kW/500 hp. This will be enough to power the BMW iX from 0 to 100 km/h (62 mph) in under 5.0 seconds.

Another intriguing factor about the BMW iX battery system is its recycling tendency. BMW managed to achieve the agenda of environmental friendly high-tech production with these recyclable batteries. These are part of a long-term resource cycle and enable an exceptionally high recycling rate. The power generated for the production of the battery cells and the high-voltage battery comes solely from all renewable sources.

The company aimed to provide a low electric power consumption for better output and as of now, the figures are less than 21 kWh per 100 kilometers (62 miles) in the WLTP test cycle. Total energy content is of more than 100 kWh which would enable the latest-generation high-voltage battery to record a range of over 600 kilometres in the WLTP cycle. This proves to be equal to more than 300 miles, according to the EPA’s FTP-75 test procedure. (All figures relating to performance, energy consumption, and range are predicted values based on the car’s current stage of development). Today’s iX looks quite production-ready and stretches roughly the same 194 inches (493-cm) length and 79 inches (201-cm) width as the X5, with the 66 inches (168-cm) height of the more coupe-like X6.

The interior of the BMW iX is equipped with the latest and the most luxurious materials and settlements. It is extremely spacious with newly developed seats having head restraints. On the roof, there is an exceptionally large panoramic glass that covers all five seats of the cabin. The entire seating placement gives a luxurious ambiance to the BMW iX’s interior. There is no real center tunnel which means extra legroom in the front and the back. Aside from sufficient legroom, there is also enough space to store materials. To further add to the luxurious ambiance, there is also a center console. 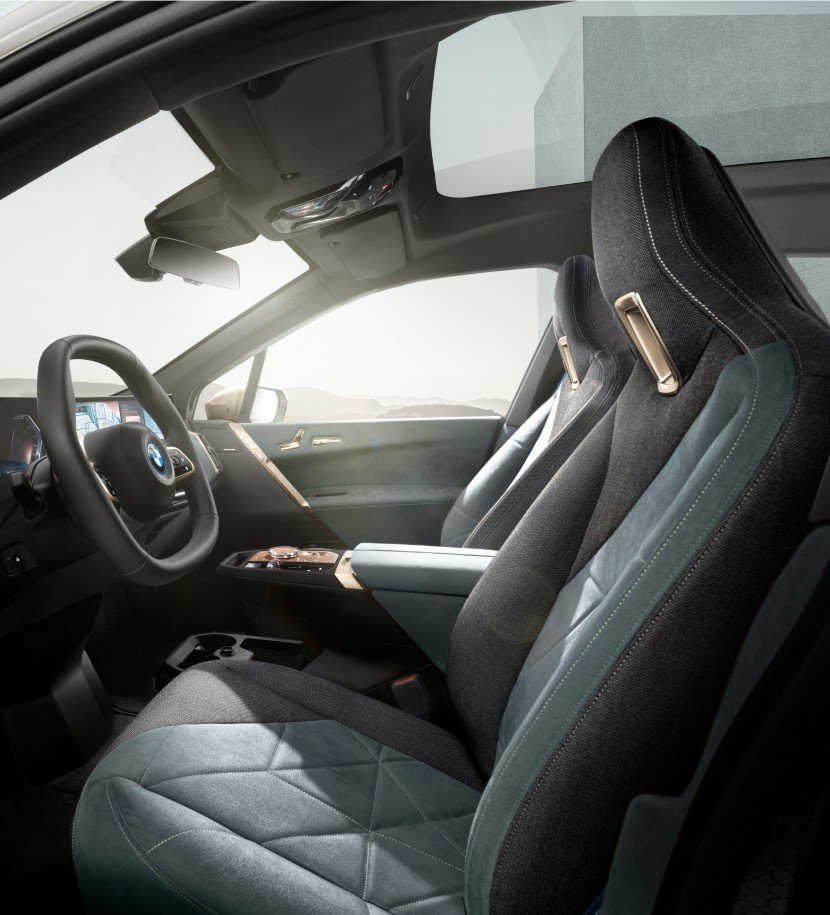 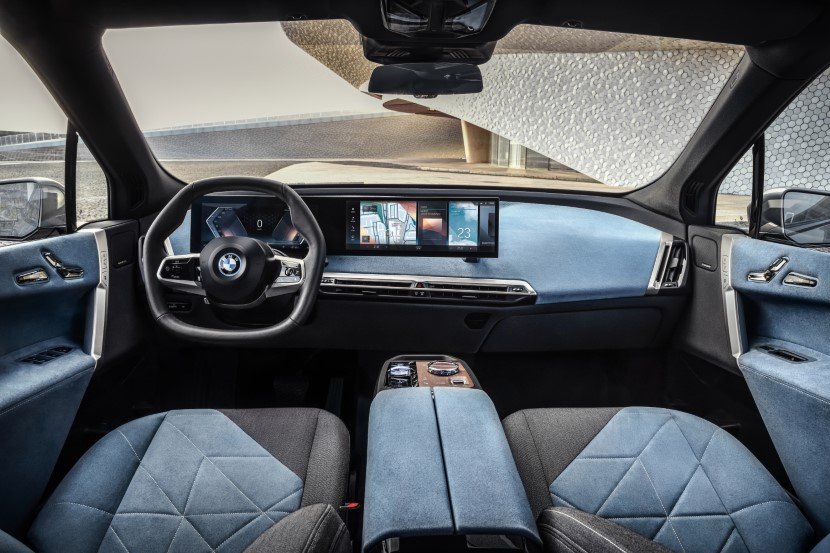 The control and features of the BMW iX allow spacious and relaxing vibe to continue for the driver. The interior features are adapted with the ‘shy-tech’ which helps keep the space uncluttered and clear. Features that tend to pop out when in need include speakers, styled air vents, heated surfaces, and the discreet recessing of the BMW Head-Up Display’s projector into the instrument panel so it is almost out of sight. The BMW iX electric SUV is equipped with a hexagonal shaped steering wheel, a rocker switch for gear selection, and the BMW Curved Display which forms part of the next-generation BMW Operating System.

As for the interior design of the iX, here’s how BMW describes it:

“The displays and controls are all stripped down to the essentials, further reinforcing the impression of an uncluttered cabin offering a place of relaxation. The technology of the BMW iX is used intelligently and only becomes visible when it is needed. This makes it intuitive to use rather than seeming overly complex. The interior design conveys a sense of safety and familiarity and engenders a new type of bond between occupants and vehicle. The shy-tech approach for the interior can be seen in a number of features, including speakers integrated out of sight, intricately styled air vents, heated surfaces and the discreet recessing of the BMW Head-Up Display’s projector into the instrument panel so it is almost invisible. The hexagonal shaped steering wheel, a rocker switch for gear selection and the BMW Curved Display – which forms part of the next-generation BMW Operating System – clearly advertise the futuristic form of driving pleasure on offer.”

The sturdy exterior is crafted diligently, with its surface shape giving an exemplary supreme aura. The rectangular contours around the wheel arches give the SUV an imposing body design. The overall crisp edges and shape give the ride its brand identity and superiority.

The German automaker describes how it fits in terms of size in its existing SUV line-up:

“The exterior of the BMW iX represents a distinctive re-imagining of the powerful proportions of a large BMW SAV. The BMW iX is comparable with the BMW X5 in length and width and is almost the same height as the BMW X6 on account of its flowing roofline. The size of its wheels, meanwhile, brings to mind the BMW X7’ 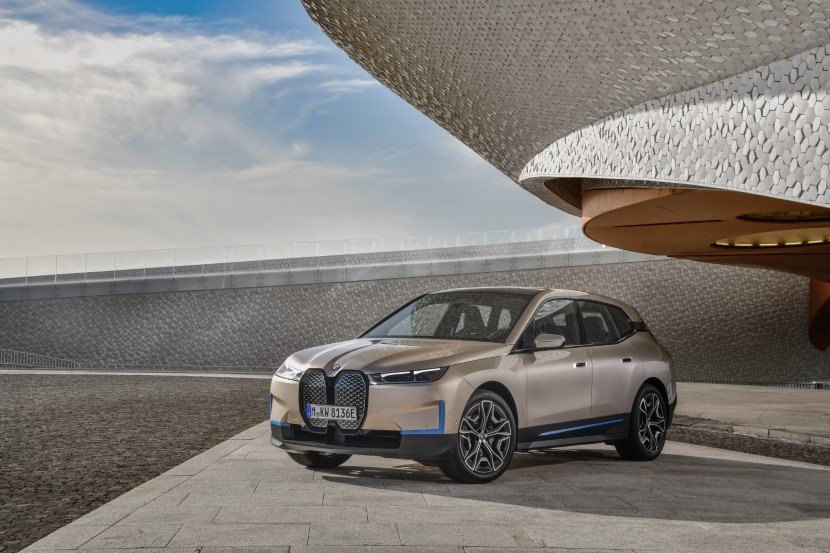 The shape, structure, and material of the BMW iX electric SUV is designed so as to maximize performance on minimal fuel usage. The lightweight surfacing and aerodynamics of the BMW are precise enough to give maximum efficiency. The body structure is made from an aluminum space frame and a Carbon Cage aid to provide remarkably high torsional stiffness which enhances agility and maximizes occupant protection while minimizing weight. These features with intelligently crafted aerodynamics give the BMW an exceptional driving experience. On the other hand, the wheels and the rear end provide optimized aerodynamics that have the ability to enhance both the performance and range of the electrically powered SAV. The BMW iX boasts exceptional aerodynamics, with a drag coefficient (Cd) of just 0.25.

Recommended for you (Article continues below)

Turn any surface into a musical instrument with…

The production is still a year apart but the company has decided to provide the first look of their newest innovation. It is developed by BMW Group who have tried their best to grasp a new sort of design, driving pleasure, and a sturdy and luxurious vibe. The group managed to successfully adapt a Sports Activity Vehicle (SAV) concept and apply it to their BMW iX.

The BMW iX comes with the newest automated driving system, electrification, and connectivity to provide a better driving experience. The company strives to provide the best of traveling experience for both the drivers and passengers of the electric SUV. The minimalist exterior aids in better mobility and better systematics. The interior is as luxurious as it gets and provides the comfort every passenger wishes to seek. 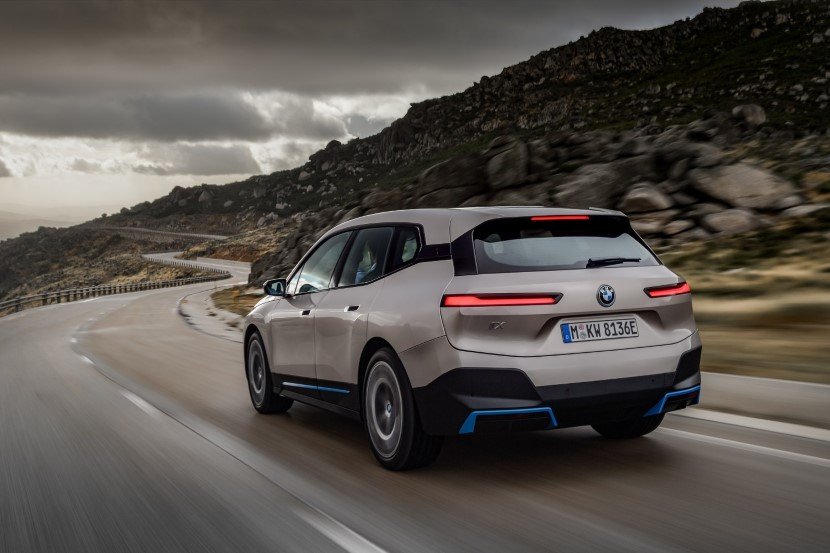 Since the BMW iX is fully electrical, there is no real use of the kidney grille. However, its job has turned digital. Placed at the center of the front end stands the kidney grille which now functions as an intelligence panel instead of providing cooling air. Camera technology, radar functions and other sensors are also incorporated into the grille behind a transparent surface.

The kidney grille, produced by the BMW Group’s LuTZ, is an intelligent technology that is perfect for advertising intelligent mobility. Providing the futuristic sleek look, the kidney grille not only provides the driver with an advanced assistance system that has never been seen before but also serves multiple high-tech functions.

Since the BMW iX is all about the future, it is being harnessed with the latest technology such as the toolkit. The toolkit provides a significant update in the field of automated driving. For example, the level of computing power has been developed to process 20 times the data volume of previous models. This means the SUV will have double the ability of computing data from various sensors.

“We are setting new industry standards with the technology in the BMW iX. The iX has more computing power for data processing and more powerful sensor technology than the newest vehicles in our current line-up, is 5G-capable, will be given new and improved automated driving and parking functions and uses the high-performing fifth generation of our electric drive system,” says Frank Weber, Member of the Board of Management of BMW AG, Development.

Other features of the BMW iX design include flush-fitted door openers (operated at the press of a button), and the tailgate which has no separation joints and extends across the whole back area. What is unique about the design is the slimmest ever headlight units to be installed on a series-produced model from BMW.

Some other luxurious installments in the BMW iX are the array of cameras and sensors installed to aid in driving and automated driving; the flushed door openers, the filler neck for the windscreen washer fluid concealed under the BMW logo on the bonnet, and the rear-view camera that is placed on the BMW logo on the tailgate.

“The BMW iX shows how we can give new technologies a very modern and emotionally engaging design. The car is technologically highly complex, but it feels very clear and uncomplicated,” says Adrian van Hooydonk, Senior Vice President BMW Group Design. “The BMW iX offers a mobile living space in which people will feel at ease and the car’s intelligence is always available without becoming obtrusive.” 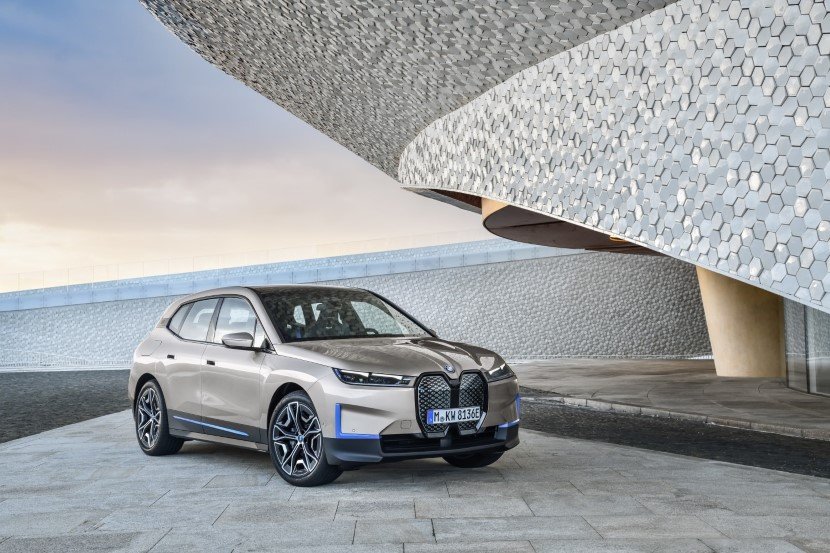 The company always strives to capture the essence of the future and this time they have incorporated it in the BMW iX. It provides a role of ‘workshop for the future’ for the entire company.

“The BMW Group is constantly striving to re-invent itself. That is a central element of our corporate strategy,” says Oliver Zipse, Chairman of the Board of Management of BMW AG. “The BMW iX expresses this approach in an extremely concentrated form.”

It is to go into production at BMW Plant Dingolfing from the second half of 2021 as the company’s flagship.  As discussed previously, the BMW iX will come with the latest technologies and the most ideal development for presenting a futuristic experience to the driver and the passengers. The developments will mostly be in the department of Automated Driving, Services, Electrification, Design, and Connectivity.

There has been no final word on what might be the price of the BMW iX but the company has announced the SUV in the competition with the Tesla which is worth $40,000. It would be difficult for BMW to manage such a large vehicle with powerful batteries in such a price range. Hence, it is expected that there will be a production of a smaller version with a smaller battery system and a shorter range.

All You Need to Know About RF and RFID Tags