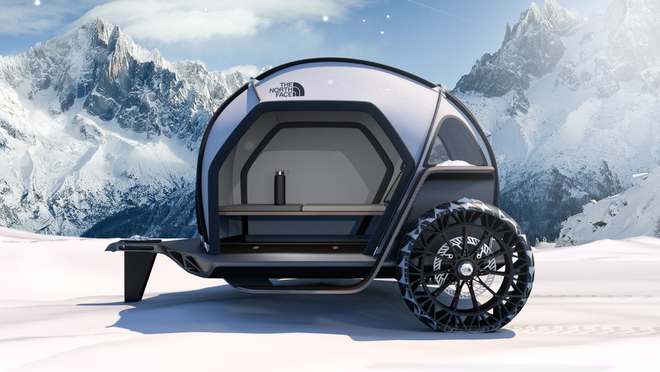 Throughout the year we see many camping trailers at events like Düsseldorf Caravan Salon and Overland Expo. However, at CES we didn’t expect to see a camping trailer on the show. The North Face and BMW Designworks collaborated to bring the collapsible Futurelight teardrop trailer to Las Vegas. This concept trailer features The North Face’s new ultra-breathable and rugged fabric, highlighting a unique design with non-pneumatic tires, tent-style canopy, and staggered beds.

To create an eccentric Furturelight trailer, TNF and Designworks closely looked at the 2008 BMW GINA Light Visionary Model, a shapeshifting concept roadster skinned in stretch fabric. Using a movable substructure and versatile skin, the GINA could change its shape, either at the command of the driver or in response to the driving conditions. 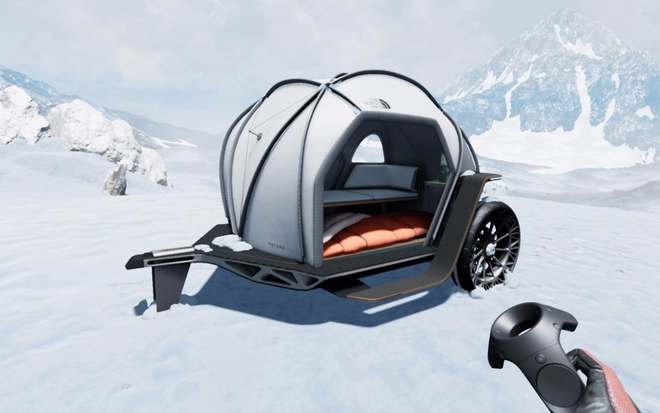 Though this futurelight concept trailer doesn’t come with the GINA’s shapeshifting capability, it does have a fabric skin with integrated stretch which is supported by an exoskeleton frame. When compared with the typical hard-sided trailer body, it is probable that the skin will be less stable and louder in high wind. It can be easily towed and stored as it is light in weight and the body of the trailer can be collapsed down like a tent.

According to The North Face, they have received a strong response regarding the trailer, and they aren’t anticipating a BMW/TNF-badged production trailer. However, this concept only serves to grab the attention of the viewers to relate the story about the Futurelight fabric made by TNF that debuted at CES, and later this year it will be launched in waterproof-breathable outerwear. This fabric will be used in the TNF’s tent construction from 2020, thus moving closer to its role on the concept trailer. 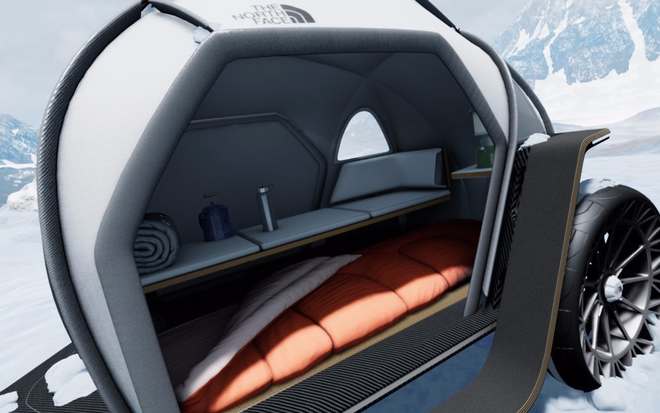 The previous design includes separate rainfly/tent wall, which gives it a stuffed look, and it collects condensation which are the common problems with single-wall tents. Considering the TNF’s new tent design, the advanced-breathing application of this fabric means that a single-wall construction will be used to save weight and ensure to relieve the users from the most common problems they faced. TNF promises that Futurelight gives plenty of toughness and full waterproofing.

The trailer is currently in the first stage of rendering, but it is expected that a prototype will be released at Outdoor Retailer Summer Market coming later this year. It will be carefully observed that how the prototype will follow the renderings. From its current looks, it appears the trailer will use airless tires from Michelin or Polaris. The interior is designed for up to two persons, and instead of a single mattress, it includes a raised rear single bed that doubles as a sofa and floor-level single bed up front. 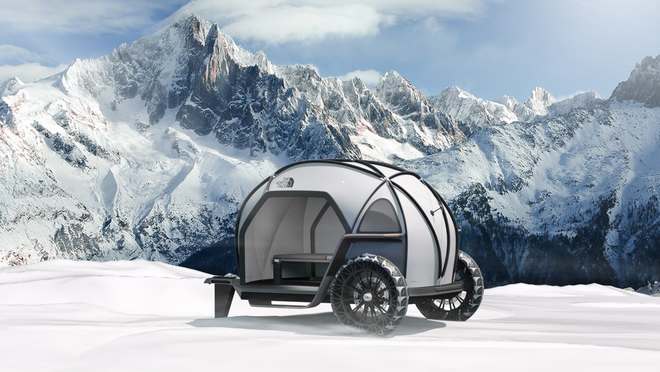 Mostly the teardrop trailers have a tailgate galley, but this fabric design eliminates it. The designers might integrate a little kitchen box onto the rear or front of the chassis. Or they can keep it simple and light, letting the Futurelight travelers bring their portable coolers and stoves.

At CES, this trailer was merely a handful of drawings, an illuminated fabric model and a fun virtual reality tour. We are looking forward to taking a closer look at its actual prototype.

Petcube 2.0 tosses treats at your pets and keep them entertained